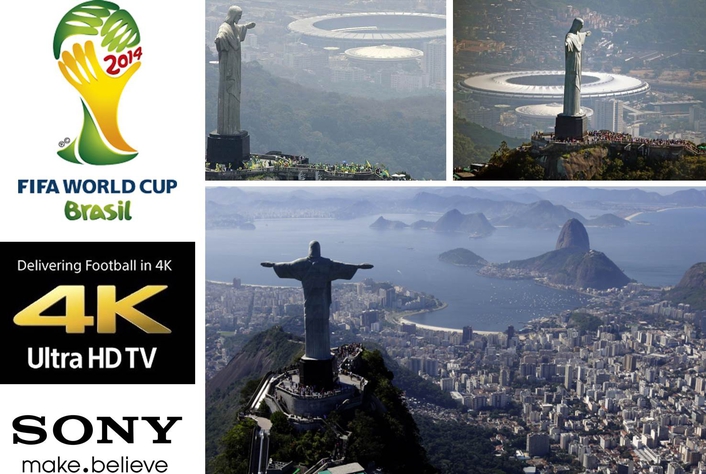 .
Sony Corporation (“ Sony” ) and FIFA (Fédération Internationale de Football Association) announced that they will collaborate on a range of 4K initiatives at the 2014 FIFA World Cup™, including production of the Official 2014 FIFA World Cup™ Film in 4K Ultra HD, and produce three full matches in 4K to further promote the growth of 4K content.

World football’s flagship event will be held in Brazil from 12 June to 13 July . Sony, an official FIFA Partner, offers a wide array of 4K products ranging from broadcast and professional solutions, to 4K- compatible consumer products such as TVs, home theat re projectors and video cameras, and provides unique and comprehensive 4K live production solutions, from shooting and production to viewing.

Through the following joint initiatives, Sony and FIFA aim to further accelerate the expansion of the 4K viewing experience:

FIFA will leverage Sony’ s professional 4K equipment within its 4K live production workflow processes at the 2014 FIFA World Cup™ to film one match from the round of 16 (to be held on 28 June ), one quarter-final (on 4 July ), and the final (on 13 July ) at the Estadio do Maracanã ) in Rio de Janeiro. Sony will be providing extensive technical support to FIFA, including the development of a 4K live production system. Sony’s products and solutions including its CineAlta™ 4K live camera “PMW-F55”, 4K multi-port AV storage unit “PWS-4400”, 4K LCD monitor “PVM-X300”, and 4K multi-format switcher “MVS-7000X”(subject to change) will be used to film the 2014 FIFA World Cup™ . The filmed 4K footage will be compiled into the Official 4K Film. 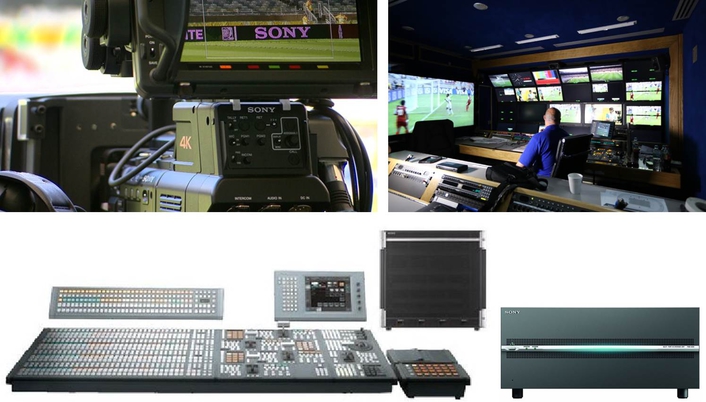 At Sony’s commercial display booths located within some of the 2014 FIFA World Cup™ stadiums and at the FIFA-hosted HD public viewing “FIFA Fan Fest™” events to be held in Brazil, visitors will be able to enjoy Official 4K Film promotional trailers produced in 4K/60P with match action.

Around the world, viewers will also be able to enjoy the 4K/60P promotional trailers for the Official 4K Film on 4K- compatible BRAVIA™ TVs at Sony showrooms and retail outlets including Sony Stores.

Soichi Kawachi, VP in charge of FIFA Partnership at Sony said, “We are very excited to offer an entirely new viewing experience at the greatest sport event in the world, the FIFA World Cup™ . By leveraging our cutting-edge 4K technology and our premier products and solutions through our partnership with FIFA, we will deliver a unique and totally compelling entertainment experience conveying the excitement of the matches in Brazil with the depth and vividness that the ultra-high definition of 4K delivers.”

“FIFA has a proud track record in embracing innovation at our flagship competition, to make sure that football fans around the world receive the very best in match coverage and experience,” said FIFA Director of TV Niclas Ericson. “ We are excited by the prospect of working with Sony to incorporate 4K technology in our production plans. 4K will propel fans around the globe into a whole new viewing dimension and it marks the dawning of a new era in the broadcasting of sport. ”

At the 2014 FIFA World Cup™ , Sony and FIFA will draw on the technological expertise they have accumulated through extensive 4K shooting trials, to capture each unforgettable moment, as well as the speed, power and excitement of the first-class football action as it unfolds on the pitch. 4K technology will enable the dynamism of the goals, the subtle expressions on the player’s faces, and the passion of the fans in the stadium to be captured with unprecedented vividness, as if the viewer were there in the stadium itself. Going forward, Sony and FIFA will accelerate their combined efforts in 4K to deliver the action and emotions of the 2014 FIFA World Cup™ to even more people around the globe.

A full overview of Sony’ s FIFA World Cup™- related activities can be found at the “ One Stadium” portal site: http://football.sony.net (#onestadium)

About FIFA
The Fédération Internationale de Football Association is world football’s governing body , comprising 209 football associations around the globe, grouped into six confederations. FIFA’s activities extend far beyond its role as the global guardian of football and its broad spectrum of international competitions, spearheaded by the FIFA World Cup™: FIFA redistributes revenue from the broadcast of the FIFA World Cup, and other commercial partnerships, to invest about USD 550,000 every day in the development of football at all levels in all of our 209 member associations, to stage a full range of youth and senior international competitions and to support social development projects such as Football for Hope.

About Sony Corporation
Sony Corporation is a leading manufacturer of audio, video, game, communications, key device and information technology products for the consumer and professional markets. With its music, pictures, computer entertainment and online businesses, Sony is uniquely positioned to be the leading electronics and entertainment company in the world.  Sony recorded consolidated annual sales of approximately $72 billion for the fiscal year ended March 31, 2013.

4K Brings Sport into Sharp Relief
EVS and HBS Reinforce The... Collaboration For Brazil
Japanese to test 8K in Brazil