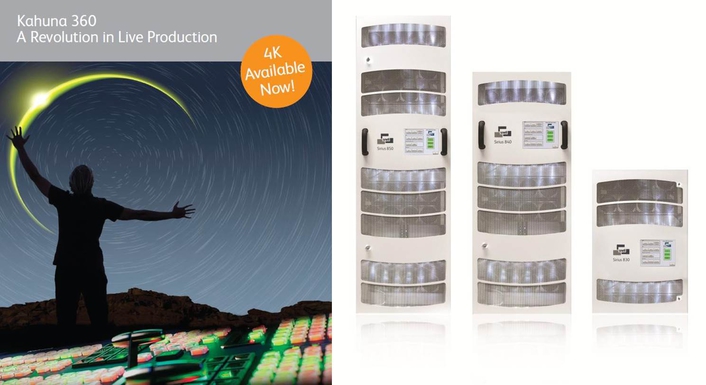 In a move that significantly lowers the barriers to 4K production, Snell announced today that it will now offer 4K functionality at no additional charge in a range of products, including select routing switchers, fiber infrastructure, and the Kahuna 360 multi-format production switcher, which now enables users to mix and match any combination of SD, HD, 1080p, and 4K sources seamlessly in the live production environment.

"We believe that quality matters in live production environment, and that technology should be an enabler of, rather than a barrier to, our customers' creative vision," said Robert Rowe, Snell's chief technology officer. "Snell's leadership helped to drive the global transition from SD to HD, and from HD to 1080p. Although the market for 4K production is limited today, we believe the time is right to help facilitate this transition as well."

"With the addition of 4K functionality, Kahuna 360 is the only truly format-agnostic production switcher on the market today," said Rowe. "Users with requirements for 4K work can begin immediately, at no extra cost. Other customers can rest easy in the knowledge that, by installing a Kahuna 360 today to meet their HD needs, they are covered for any future 4K demands."

Integrated 4K UHDTV distribution and routing are key to maintaining a reliable and efficient workflow in today's emerging 4K UHDTV production environment. From the camera, each of two 4K UHDTV four-stream SDI signals can be converted into single-mode fiber-optic signals, and Snell's IQCWM09 fiber-optic CWDM module can, in turn, multiplex these eight fiber streams into one fiber output suitable for transmission by Snell's IQOTX80 multi-channel fiber transmitter over considerable distances.

At the studio, Snell's IQCWM09 demultiplexer and IQORX80 multi-channel fiber receiver can convert the signals back to two groups of four SDI streams, which can then be routed together precisely to the appropriate destination — such as the Kahuna 360 — via Snell's Sirius 800 series router. The 11-RU Kahuna 360 system can accept incoming 4K UHDTV feeds, mix them with 1080p, and output the result as 4K UHDTV, 1080p, or both formats simultaneously, helping broadcast and media organizations to adopt new workflows easily as opportunities arise.

Kahuna 360's 4K support is transparent, requiring no change to the switcher layout. Working with 4K and 1080p inputs, broadcasters can use Kahuna 360 to mix HD and 4K either as backgrounds or as key layers on the M/E. Snell's unique Make M/E™ technology allows switcher resources to be shared among multiple M/Es and output either as 4K, HD, or both simultaneously in a parallel workflow. Broadcasters thus can output an HD signal for broadcast as well as a 4K signal for a projector or other distribution target. Existing functionality such as color correction may be applied just as readily to 4K signals as to HD inputs or outputs.

4K support is now available on all new and existing 11-RU Kahuna 360 systems.