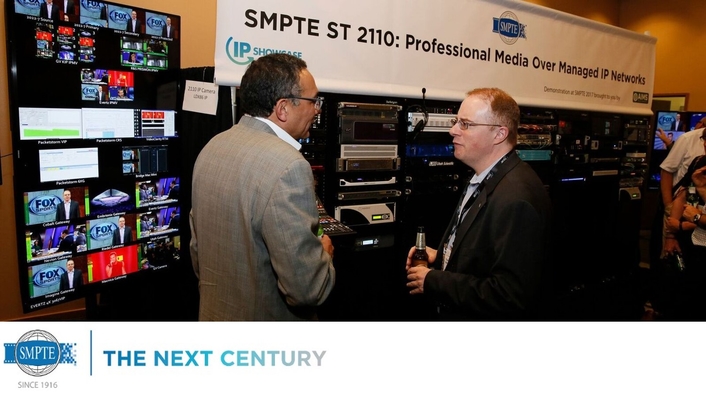 First Four Documents of the Standards Suite Are Now Available

"Professional media is a uniquely challenging field because of its real-time nature and high quality-of-service requirements, both of which consumers may take for granted," said SMPTE President Matthew Goldman, senior vice president of technology, TV and media at Ericsson. "The standardization of SMPTE ST 2110 documents provides broadcasters, producers, and media technology suppliers with the tools they need to meet these requirements while working in the IP realm."

With SMPTE ST 2110 standards, intrafacility traffic now can be all-IP, which means that organizations can rely on one common data center infrastructure rather than two separate facilities for SDI and IP switching/routing. The foundation for the first SMPTE ST 2110 standards came from the Video Services Forum (VSF) Technical Recommendation for Transport of Uncompressed Elementary Stream Media Over IP (TR-03), which VSF agreed to make available to SMPTE as a contribution toward the new suite of standards.

SMPTE ST 2110 standards make it possible to separately route and break away the essence streams — audio, video, and ancillary data. This advance simplifies, for example, the addition of captions, subtitles, and teletext, as well as tasks such as the processing of multiple audio languages and types. Each essence flow may be routed separately and brought together again at the endpoint. Each of the component flows — audio, video, and ancillary data (there may be multiple streams of each type) — is synchronized, so the essence streams are co-timed to one another while remaining independent.

SMPTE is currently developing a dedicated course on ST 2110 for its Virtual Classroom which will be offered beginning in February 2018. Currently SMPTE's Internetworking, Routing & Switching Programs courses, as well as the Essentials of IP Media Transport for Broadcasters, help to provide a solid foundation in networking. SMPTE Virtual Classroom course descriptions and registration are available at www.smpte.org/courses.

More information about SMPTE ST 2110 standards is available at www.smpte.org/st-2110.

About SMPTE®
For more than a century, the people of SMPTE (pronounced "simp-tee") have sorted out the details of many significant advances in media and entertainment technology, from the introduction of "talkies" and color television to HD and UHD (4K, 8K) TV. Since its founding in 1916, SMPTE has received an Oscar® and multiple Emmy® Awards for its work in advancing moving-imagery engineering across the industry. SMPTE has developed thousands of standards, recommended practices, and engineering guidelines, more than 800 of which are currently in force today. SMPTE Time Code™ and the ubiquitous SMPTE Color Bars™ are just two examples of SMPTE's notable work. As it enters its second century, SMPTE is shaping the next generation of standards and providing education for the industry to ensure interoperability as the industry evolves further into IT- and IP-based workflows.

SMPTE's global membership today includes more than 7,000 members: motion-imaging executives, creatives, technologists, researchers, and students who volunteer their time and expertise to SMPTE's standards development and educational initiatives. A partnership with the Hollywood Professional Association (HPA) connects SMPTE and its membership with the businesses and individuals who support the creation and finishing of media content.