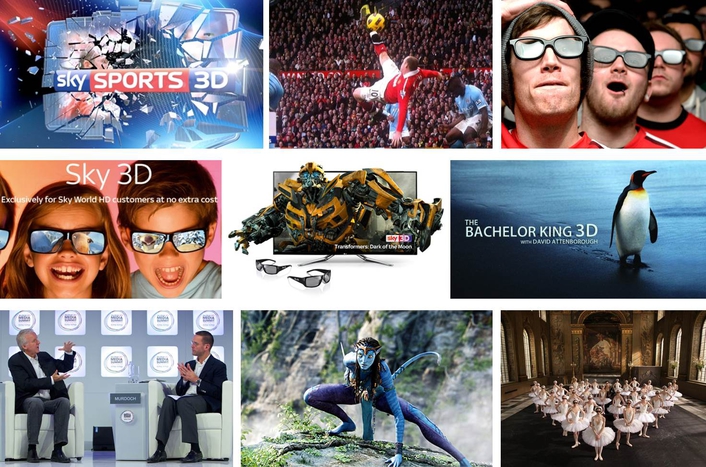 .
While there’s plenty of bad news around for 3D-TV, with ESPN and the BBC saying that they will not be making any new 3D investments once their current projects are completed, BSkyB is staying loyal to the technology.

BSkyB’s 3D director, John Cassy, in a blog, reaffirms Sky’s commitment to 3D arguing that progress – while not quite what the industry had hoped – was still being made. As of last week, more than half a million BSkyB TV customers had signed up to watch 3D, “bringing to a close our strongest quarter of growth to date,” Cassy says.

“Certainly the ongoing economic downturn has meant that households are tightening their belts, and people have upgraded their TV sets to 3D at a slower rate than the industry first forecast,” said Cassy in his note. “Some potential viewers may have also delayed experiencing 3D, preferring to wait for new technologies, which mean they don’t have to wear glasses.”

“Our experience of 3D TV has been far more positive despite these challenges,” he said. First up, “3D has been a great way of helping our customers get move value from their Sky subscription by providing a unique, immersive 3D experience at home for no additional cost,” he argued. “This is because – unlike some other providers of 3D programming, in the UK or US – we are a platform operator as well as a content producer. This means that a significant proportion of the value of providing great TV in 3D lies in how it helps attract new customers to join Sky and in how it provides another reason for existing customers to stay with Sky.”

This is true, and the fact that Sky’s investment in 3D can be amortised over ‘ordinary’ HD broadcasting must help in the ‘cost per hour’ argument associated with production budgets.

Second, he quoted research that indicates Sky’s 3D viewers are among the company’s most satisfied customers, with sports, movies and natural history their favourite genres. “That’s why those areas – big event TV – are our focus moving forward,” Cassy argued.

He added that in his conversations with the display industry he expected high-quality 3D displays to be widely available for viewing without glasses in 2-4 years time and “at prices not dissimilar” to today’s HD and 3D sets.

The future of Sky 3D
Sky 3D has been the UK's only dedicated 3D television channel since its launch in 2010 and TechRadar caught up with Sky 3D head John Cassy as Formula 1 was given the 3D treatment in a one-off experiment.

Cassy - a former journalist who previously headed up Sky Arts - talked extensively about the progress of 3D, the coming of UHD television and the growing role of on-demand.

Can you update us on how Sky 3D has progressed since its launch a few years ago?
Cassy: We're in very good shape really. We went on air in October 2010 and since then we have grown very well, if you look at where the launch of HD was at this stage in its life, we're not far away. If you were to speculate at the number of homes that have 3D, the figure that often surfaces [400k] is about right.

And how many of those homes are actually watching 3D?
Cassy: It's driven by events as much as anything. We've evolved our strategy to focus on the key events so, as an example, Sunday [had] F1 testing, then over to the North London derby and then Got to Dance - the Sky One's reality show - that's three different big shows, all live and all in 3D.

And all different audiences as well, we'd imagine.
Cassy: They are distinctive enough. Movies are one of the other key areas and we've had a series of landmark documentaries voiced by Sir David Attenborough like the Penguin King, Meerkats 3D and Galapagos 3D. The latter did very well for us in 3D and it's one of the special treats.

It's value add for your audience as much as anything, isn't it?
Cassy: The thing is, at Sky we are very aware that people choose if they want to be one of our customers, and we've got to basically make sure we are always giving them value and 3D is one of a number of ways we can give them value. When we talk to them they love the 3D experience and they would like the chance to see something in a completely different way; Formula 1 is another illustration of this.

What does the addition of Formula 1 bring for the sport and for the technology?
Cassy: The Formula is very much a one-off, it's a chance to do something we are all very excited to try. Formula 1 management have been great in enabling this to happen. I'm interested to see it myself. What we've done in 3D is we have tried to pick out the big interesting events, like the Ryder Cup where we partnered with Cameron Pace, James Cameron's company. We did a few days of coverage there and, not only is golf amazing in 3D, but the Europeans staged one of the greatest comebacks ever. We hope that [Formula 1 in 3D] will offer an interesting new way of watching.

One of the big trends in the last few years is 4K and Ultra HD. Sky was a pioneer of HD and 3D in the UK, can we expect to see that kind of step up to UHD?
Cassy: From our point of view, Sky always has been, and we hope always will be, at the front of TV innovation in the UK. If you look at what drives TV development, it's better picture and better sound, so we went from silent and black-and-white, to sound and black-and-white, to colour, to digital, to HD and now 3D and so there will be future technologies. We have a watching brief on Ultra HD and 4K. Actually what we have been doing, the Attenborough shows have all been filmed in 4K - and in some cases 5K - so they have been captured and future-proofed in a sense, as far as we can. But we're playing around with it.

And UHD obviously has some real benefits for 3D as well...
Cassy: There are very clear benefits that 4K gives 3D. The resolution is better and also it could help in glasses-free 3D because it enables that whole resolution and picture quality.

And have you actually seen a glasses free 3D television that impresses you?
Cassy: I have, but it's under NDA so I can't talk about it! For my mind, high quality glasses-free TV at a price that the average house can afford is a matter of when and not if. It's going to happen, it's just a question of when and the technology we see - we have as much of this as we can - is definitely coming along. It's a bit of a way off but it's coming along.

It's nice from a tech perspective to hear Sky saying it wants to continue being an innovator - how important to you think that's been to the company?
Cassy: I think it's really important. From the start when Sky launched there were four channels in the UK and one of the things did was broaden that choice out massively. So it meant you get more sport, if you wanted music channels you could and so on. Consumers wanted more choice and that was one of the first innovations we brought.
We also know that if you operate in a county where the free offering is very strong like the UK you have to make sure that if you ask people to pay, you offer something really amazing. You have to ask 'what are people looking for now, or might want tomorrow?' and introduce them in a way that people can continually afford until it's worth paying for.

A lot of major TV companies, including Sky, are banging the drum about linear television still being dominant for some time to come. Do you feel like the on-demand stuff like Sky Go Extra will start to change our viewing habits?
Cassy: This is getting out of my territory but Sky Go and Sky Go Extra have been very big for us, increasing numbers. The ability to pay for subscription and take it away from your main TV set is really really important.

Dropping back into something more familiar: 3D has been mainly a linear offering so far. Can you see more 3D content appearing on-demand?
Cassy: Yes. We have done a bit of on-demand and we are always looking to give the customers more ways to watch. So we're looking for opportunities.