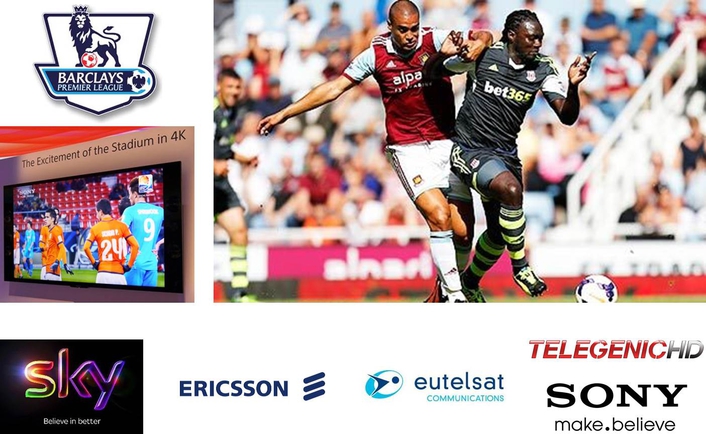 .
As part of Sky’s on-going innovation in technology, on August 31st its research and development teams successfully broadcast the UK’s first ever live event in Ultra HD at its West London HQ. The broadcaster filmed Saturday’s 3pm Premier League football match between West Ham and Stoke City and transmitted the whole match live over satellite through its Studio facility.

All the content was directed live, produced and edited by Sky’s in-house football production and broadcast operations teams using four Sony F55 UHD cameras complemented by two UHD EVS servers for replay, and graphics. The production was done from a purpose built outside-broadcast truck in conjunction with Sony and Telegenic in line with current live HD broadcast techniques.

The content was delivered using Sky’s end-to-end broadcast platform and was shown on a Sony 84” Ultra HD TV at its headquarters in Isleworth.

Sky stresses that this was not a product launch, purely an early demonstration as part of Sky’s on-going tests to develop the broadcast requirements to meet any future demand for Ultra HD. Sky is currently working with others in the wider TV industry, including TV manufacturers and studios to assess the potential for Ultra HD.

The demonstration involved:
Sky’s football match Director, Tony Mills – who was responsible for capturing Sky’s first ever broadcasts of a live football match in both HD and 3D – oversaw the live outside-broadcast of West Ham vs. Stoke City.

Four Sony UHD cameras were used to capture the match, which was simultaneously broadcast from Telegenic’s outside broadcast truck, encoded as four synchronous full HD feeds by Ericsson over a Eutelsat transponder to its London’s HQ. It was then routed to its studios where the live feed was played out on a 84” Sony UHD screen which currently retail for £25,000 (55” is available in stores for £3,999 ). The picture was broadcast in Ultra High Definition 2160 X 3840 – four times the resolution of current HD and at 50 frames per second – double the current HD rate of 25 using the QFHD format of four full HD tiles to construct the full image.

After the event, a Sky Spokesperson said: “As you’d expect from Sky, we are constantly experimenting and evaluating new technologies which may help our customers get more enjoyment from the TV they love. As part of this research we have successfully broadcast a test event in Ultra HD. It’s yet another UK first for Sky. We will continue to test and learn so that we’re ready as and when the market for Ultra HD begins to develop.”