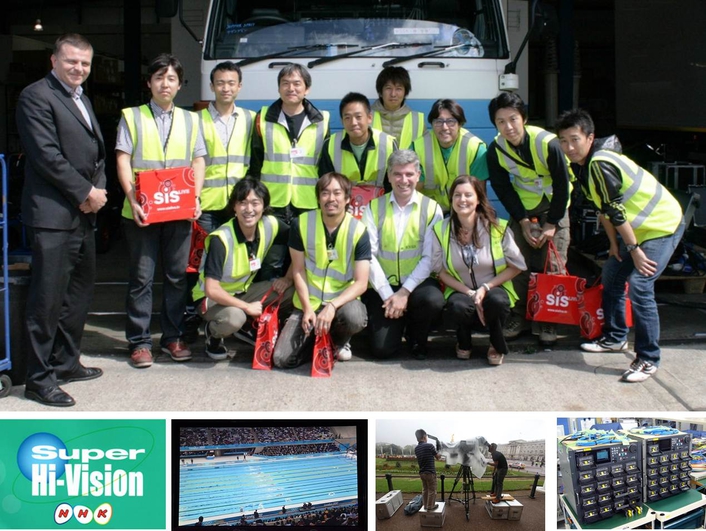 .
Outside broadcast, satellite uplink, and product design specialist SIS LIVE has been supporting the BBC and NHK over the summer in their deployment of the new super hi-vision technology. Super hi-vision is one of the new technologies showcased this summer, with selected events, including the Opening and Closing ceremonies and the Men’s 100m final being broadcast live in super hi-vision at special screenings around the UK, as well as at locations in Japan and the USA.

Throughout July and August, London provided a spectacular showcase and backdrop for the SHV technology, which broadcasts pictures at 8 times the resolution of HD, and delivers sound at 22.2 (compared to 5.1 surround). The quality is at the limit of what the human eye can register, so this really is the pinnacle of high definition broadcasting.

Japanese state broadcaster NHK, in collaboration with the BBC 2012 team, handled the recordings, transmission and screenings. SIS LIVE has a history of collaboration with NHK and in the preparations for their project provided expert technical and logistical outside broadcast support for the Japanese NHK crew who were tasked with integrating the specially adapted outside broadcast vehicle and audio equipment shipped in from Japan.

As well as moving their outside broadcast unit to various iconic locations around London, SIS LIVE has also provided dedicated workshop space and technical crew at their Langley OB base, to assist with the integration of the NHK audio equipment into a SIS LIVE audio truck which operates alongside the NHK SHV OB unit.

As one of the largest and longest-serving outside broadcast companies in the world SIS LIVE was the perfect choice as a technical partner for this part of the project. NHK were able to benefit from the extensive experience of its staff, as well as a well-equipped workshop space and a highly specified audio truck.

Barry Parker, commercial manager, SIS LIVE says “We are pleased to support this exciting international venture which has enormous potential for the future. Having experienced the super hi-vision screenings of Olympic events I can say that effect is outstanding and I have no doubt that we are going to see this technology develop further in the future.”

About SIS
SIS is one of the world’s leading companies in the television broadcasting industry. It is the foremost supplier of television programming and data services to the UK and Ireland betting industry. The company’s broadcast business, SIS LIVE, operates the largest satellite uplink fleet in Europe and is the largest outside broadcast provider in the UK. SIS LIVE offers a complete broadcasting solution including global distribution, satellite internet and IP provision, special camera systems, wireless camera solutions and broadcast systems integration services. SIS LIVE also designs and manufactures an innovative, market-leading range of satellite and broadcast products. The company covers over 100,000 hours of live events worldwide each year and delivers approximately 80% of live news feeds across the UK.  Credits include the America’s Cup, Formula One, Wimbledon Championships, Glastonbury Festival and European Tour Golf.