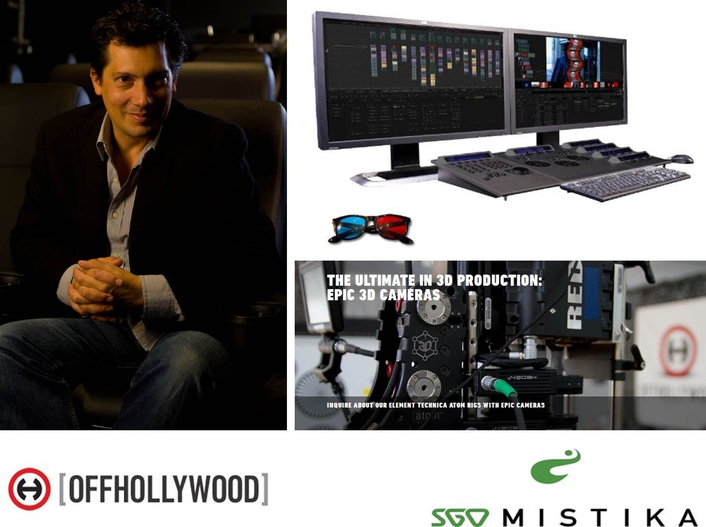 OFFHOLLYWOOD has been at the forefront of cutting-edge technology in stereoscopic 3D tools and technology since 2009
SGO  announces today the sale of the very first Mistika 4K system  in the US East Coast at New York-based OFFHOLLYWOOD.   Leading innovators in 4K, 3D acquisition and post production services,  OFFHOLLYWOOD chose Mistika as its system of choice after careful examination of all the current systems in the market to date.   Mistika’s highly developed toolset and workflow compatibility with RED Epic and Element Technica's (ET) ATOM 3D rigs, blatantly outshine the competition and play a crucial and advantageous role in  enabling OFFHOLLYWOOD to provide first-rate Stereo 3D production services.

Director of SGO Global Sales & Operations, Geoff Mills states: "OFFHOLLYWOOD is yet another company that is excited about SGO Mistika, and recognises a product with unrivalled capabilities. It is clearly evident that Mistika is now perceived as simply the most powerful stereo 3D system in the market and a vital ‘must have’ asset to drive business forward in a serious way.” Geoff continues: “Mistika is leading the industry evolution working on high quality projects across film, television, and commercials worldwide and SGO is delighted that Mistika is the first choice for creative, innovative customers such as OFFHOLLYWOOD, who demand only the very best."

This recent Mistika investment follows  SGO and Element Technica jointly announcing a strategic technical collaboration which integrates Element Technica’s 3D rigs, through bi-directional meta-data capability, with SGO’s flagship DI and Stereo 3D Mistika post production system, which enables live interaction between all functions and accepts almost any image resolution from SD to 5K and beyond, in 2D and Stereo 3D.

Mistika was also the very first finishing tool to support Digital Cinema’s 5K EPIC camera. The system has proved to be the perfect partner for projects  filmed in RED over the past few years, providing direct native support of the REDCODE RAW file format, resulting in transcoding and importing delays being eradicated. Post production using Mistika can start the instant the RED files are available.

Mark L. Pederson, CTO and Co-Founder of OFFHOLLYWOOD, explains:  “We are fanatically excited about moving our 3D finishing pipeline to Mistika 4K for stereo productions shot on Red’s EPIC camera system.  We’ve evaluated every tool in the marketplace, and some that haven’t even been released yet, and there is nothing even close to Mistika’s 3D tool set. SGO’s willingness and enthusiasm to collaborate in addition to its open and configurable architecture set the stage for the start of an exciting strategic relationship.”

Geoff concludes: “We are delighted to be working closely with Mark and his team to supply OFFHOLLYWOOD with outstanding solutions for the highest quality stereo 3D productions. SGO will continue to develop ground breaking performance, creative tools and workflow while at the same time provide a much valued relationship with its customers.”

OFFHOLLYWOOD boasts an array of highly acclaimed projects to its name including the recent feature film production, Hellbenders, and an upcoming slate of films being produced with Circle of Confusion, a leading management production company.

OFFHOLLYWOOD is a leader in 4K and 3D acquisition and post production services based in New York City. Steeped in emerging technologies, R&D, and cutting-edge production and data-centric workflows, the company actively partners with leading hardware and software vendors. OFFHOLLYWOOD is tapped both by major studios and independent producers for a wide  range of challenging projects for digital cinema, television and mobile platforms.