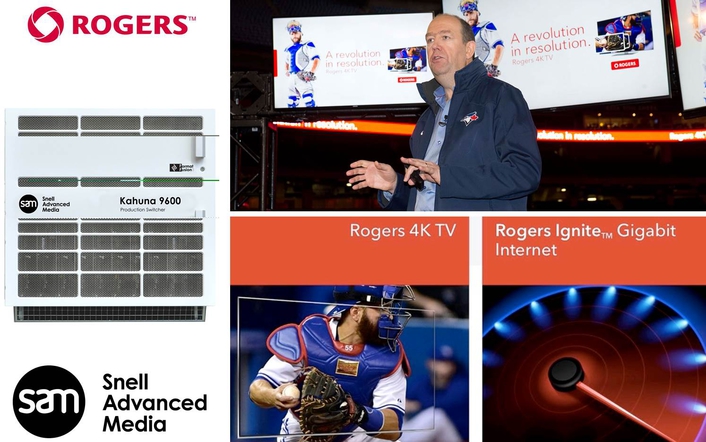 Rogers Media, a core division of Canadian media giant Rogers Communications, has selected SAM to provide a range of leading technology for its new, market-defining 4K and HDR broadcasting services. The announced programming package to be delivered includes over 100 live sports events, including every Toronto Blue Jays baseball home games and more than 20 NHL games.

The investment follows on from Rogers CEO Guy Lawrence’s announcement last year about the company’s 4K intentions and commitment to the market. At the heart of the installation is a Kahuna 9600 switcher– featuring a 16 input A/B cut buss - for the MCR alongside Morpheus automation and ICE Channel-in-a-Box (CiaB) units. Rogers Media has also installed main and backup 4K sQ servers in addition to a range of SAM infrastructure products.

David Tasker, VP Systems & Technology SAM, commented “We have deployed 4K solutions before, but none of them have been as comprehensive as the system we have installed at Rogers. We’re very proud of the capabilities our 4K range offers and I think we’ve proved we can compete at every level.”

Having announced its determination to pioneer 4K, Rogers began a period of comprehensive market research to evaluate playout options, followed by a series of technical trials. This included a visit to BT Sport in London, a broadcaster that is leading the way with 4K in Europe via its recently-launched Ultra HD channel. BT Sport’s production partner Timeline TV installed SAM 4K technology in its new OB truck, deployed last year, to service the BT Sport channel.

Rogers then carried out proof-of-concept testing in Canada from multiple manufacturers, with the first live test - a 4K broadcast of a regional hockey game - occurring on Dec 4th. SAM’s technology was also deployed for coverage of Sportsnet’s joint venture with BT Sport and the NBA to cover the Raptors vs. Orlando Magic game in January live in 4K from The O2 Arena in London.

Rogers are long-term users of the Enterprise sQ infrastructure for their HD broadcasting and were keen to begin their 4k services with a known and proven product. The UHD variant of the sQ 1800 server stores the 4K media as single image files, removing the risk of synchronization or alignment errors. Coupled to a 4K-enabled version of the Qube editor, the system allowed recording, editing and playback from a single mainframe. Playback control was from the existing SAM Morpheus installation.

Frank Bruno, Rogers Media said, “After a rigorous testing process with a variety of manufacturers, SAM’s technology just worked. SAM’s support during the proof of concept was excellent, installing, testing and ensuring the system would be rock-solid live on-air. In fact, we have gone live with the proof of concept system while we deploy the full system it worked that well.

Tim Thorsteinson, SAM CEO, said, “We are very pleased to have been selected by Rogers Media for such a pioneering 4K project. In terms of scale and objectives this is a project that the whole world will be watching as it evolves. 4K is very impressive in a sports broadcasting environment, pushing coverage to the next level of immersion and entertainment.”

About SAM
Formed from the fusion of Quantel and Snell, SAM is a new company with a unique mix of experience and energy.  We have the vision to deliver business-transforming solutions across the media production ecosystem. Our future-ready systems enable broadcasters, content owners and service providers to evolve their business models to succeed in the consumer-driven era. We understand that it’s not only about the future – to get there, today’s needs are also paramount; our smart, agile technology maximizes efficiency and productivity in today’s rapidly changing media landscape.