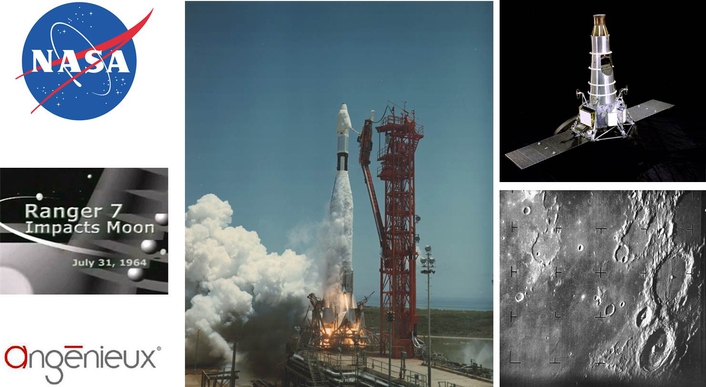 On July 31, 1964 Ranger 7 took the first pictures of the Moon. These pictures were made by Angenieux 25mm f: 0.95 M1 lenses
The Ranger program was a series of nine unmanned space missions by the United States in the 1960s, between 1961 and 1965, whose objective was to obtain the first close-up images of the surface of the Moon: large-scale topographic information needed for the Surveyor and Apollo projects. The Ranger spacecraft were designed to take images of the lunar surface, transmitting those images to Earth until the spacecraft were destroyed upon impact. A series of mishaps, however, led to the failure of the first six flights.

Ranger 7 was the first US space probe to successfully transmit close images of the lunar surface back to Earth. It was also the first completely successful flight of the Ranger program. Launched on July 28, 1964, Ranger 7 was designed to achieve a lunar impact trajectory and to transmit high-resolution photographs of the lunar surface during the final minutes of flight up to impact. Ranger 7 reached the Moon on July 31, 1964.

Rangers 6, 7, 8, and 9 were the so-called Block 3 versions of the Ranger spacecraft. The spacecraft consisted of a hexagonal aluminum frame base 1.5 m across on which was mounted the propulsion and power units, topped by a truncated conical tower which held the TV cameras. Two solar panel wings, each 739 mm wide by 1537 mm long, extended from opposite edges of the base with a full span of 4.6 m, and a pointable high gain dish antenna was hinge mounted at one of the corners of the base away from the solar panels. A cylindrical quasi omnidirectional antenna was seated on top of the conical tower. The overall height of the spacecraft was 3.6 m. The equipment for picture shots was fully redesigned in Rangers 7, 8 and 9.

The spacecraft carried six television Vidicon cameras. The cameras were arranged in two separate chains, or channels, each self-contained with separate power supplies, timers, and transmitters so as to afford the greatest reliability and probability of obtaining high-quality video pictures. No other experiments were carried on the spacecraft. The first channel had two full-scan cameras, one wide angle (25 degree field of view and 25-mm focal length) designated the A-camera and one narrow angle (8.4 degree field of view and 76-mm focal Ranger 7 – Block 3 versionlength) B-camera. The other channel had four partial-scan p-cameras, two narrow angle and two wide angle. 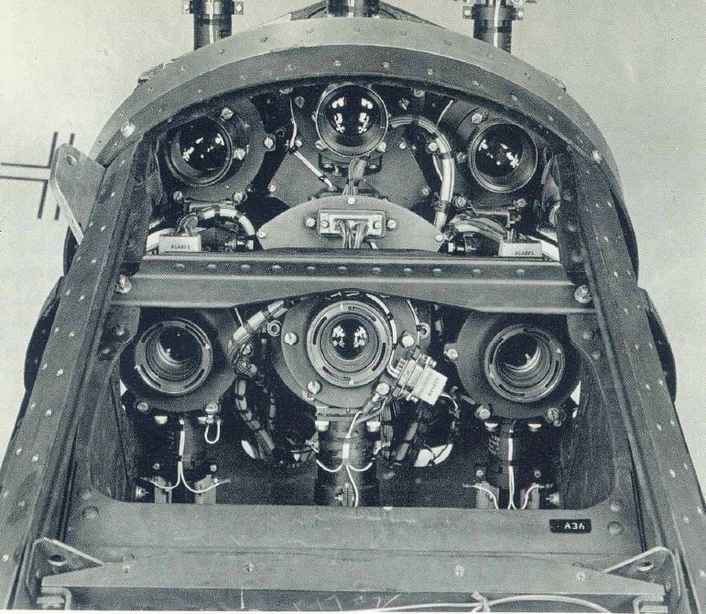 The three cameras positioned on the bottom row were fitted with the Angenieux 25mm f:0.95 M1 lenses ( for wide-angle shots) inside specially modified housings, while the top 3 cameras were fitted with the same B&L 76mm f2 Super-Baltar lenses that were used in the Ranger 6 mission (for narrow-angle shots). The 25 mm Angenieux wide angle lenses were added to the package for Ranger 7 and following Rangers, meaning that basically the three successful and celebrated missions of the ranger program all used the Angenieux lenses, while the earlier six (failed) missions did not. 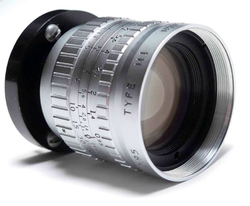 Ranger 7 photographed its way down to target in a lunar plain, Mare Cognitum, south of the crater Copernicus. The full-scan camera system began transmitting pictures at 1308 UT on July 31, 1964, 17 min 13 sec prior to impact. The partial-scan system initiated transmission of pictures at 1312 UT, 13 min 40 sec prior to impact. The last full-scan transmission occurred between 2.5 and 5 sec before impact, while the last partial-scan picture was taken between 0.2 and 0.4 sec before impact and achieved resolution to 0.5 m. Image motion is more severe in the last pictures. The experiment returned 4308 photographs of excellent quality, 1000 times better than from the best telescopes from Earth.

Parallel to Ranger program, Angenieux collaborated with the NASA for the preparation of Apollo program whose objective was to send man on the Moon. NASA set up the Mercury (1958-1963) and Gemini (1964-1966) programs in order to test equipment configuration and develop travel techniques for the astronauts at close distance from the Earth before their trip to the moon.

As the aim of Mercury missions was to send a man in space, Gemini missions aim was the control of the space craft. A 18mm prime Angenieux lens mounted on a Maurer 16mm film camera was on board of Gemini 10 spacecraft whose primary objective was to rendezvous and docking with Gemini Agena target vehicle. Gemini 10 was the first fully successful Gemini mission. 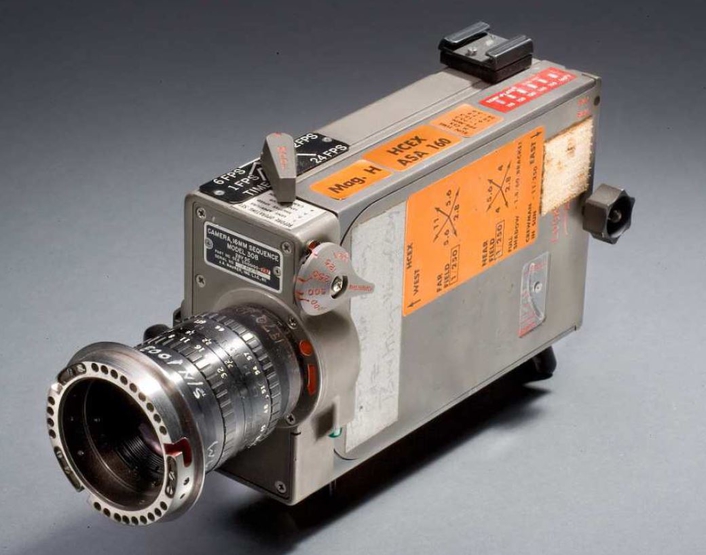 In May 1969 the Apollo 10 spacecraft carried a Westinghouse TV color camera equipped with a 6x25 Angenieux zoom providing the first color video images of the crew and of the moon shot from a short distance. The same camera was used in Apollo 11 command module, shooting live in color the astronauts Niels Amstrong and Buzz Aldrin on their trip to and from the moon surface. A Maurer 16mm film camera equipped with the 18mm Angenieux lens was also onboard of the command module shooting from a window the maneuver of the Lunar Module separating and docking with the command module. 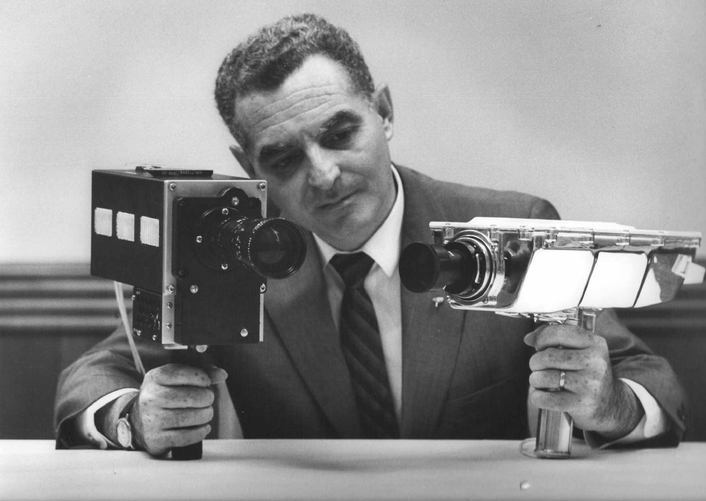 In order to capture those images, it was necessary to create a special zoom lens that was small, light, easy to operate and compatible with the Westinghouse camera equipped with a 25mm sensor. Angénieux transformed the back of the 6 x 12.5 lens into 6 x 25, and adapted it to specific conditions. Angénieux was able to develop a special mechanical lubrication process, as the standard lubrication would evaporate in the void and cover the lenses in fine spray. It was also necessary to develop a new way of treating optical surfaces while protecting all the equipment from solar radiation. 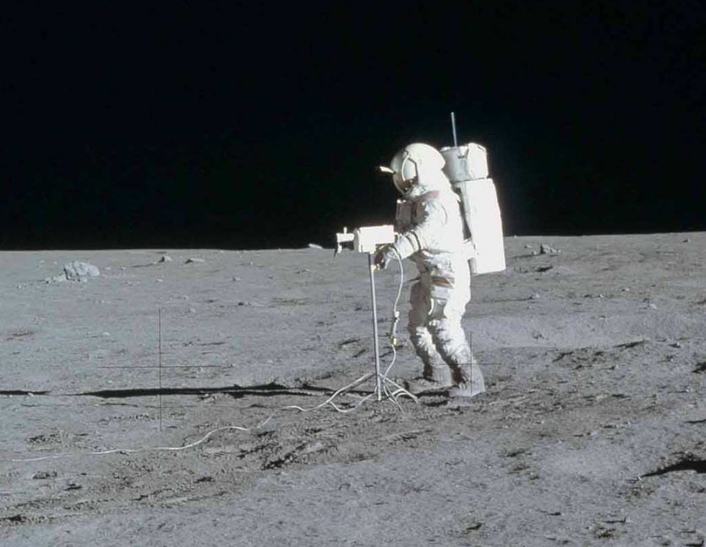 In November 1969 the Westinghouse TV color camera was set on the moon surface during the Apollo 12 mission but was never used due to technical failure after being exposed to the sun. The first color video images were sent from the moon surface, taken through the Angenieux 6x25mm zoom, in January 1971 during Apollo 14 mission.

Video that NASA released at the time of the Ranger 7 flight, showing a time-lapse of the images shot by Ranger. The frames in the video are all from the wide-angle “Fa” camera fitted with Angenieux 25mm f0.95 lens. None of the narrow-angle images are shown.

About Thales Angénieux
Thales Angénieux, a Thales subsidiary, is a world-renowned manufacturer of high-tech optical and optronic systems. Awarded three times by the Academy of Motion Picture Arts and Sciences in 1964, 1989 and 2008, and by the Society of Camera Operators in 2012, Angenieux lenses are utilized all around the world by the most demanding image professionals for the production of features, commercials, dramas, documentaries, music videos, sports or cultural First image of the Moon taken by Ranger 7 with an Angenieux 25mm f : 0.95 lens on July 31, 1964