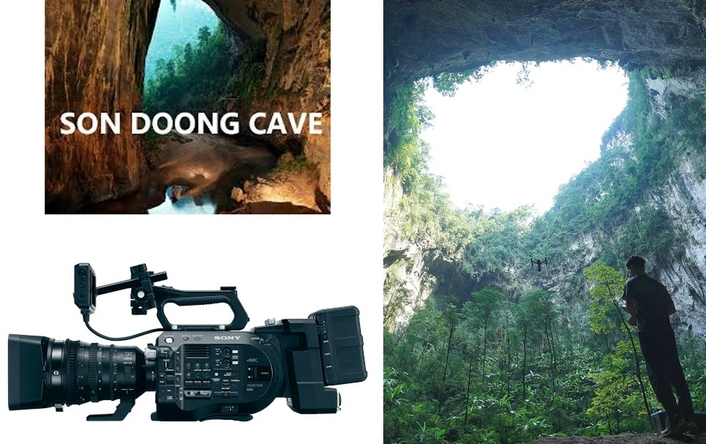 Vietnam’s Sơn Đoòng Cave is the world’s largest at over 5km long, 150m wide and, at its tallest, over 200m high – able to accommodate the Statue of Liberty twice over. Estimated to be 2-5 million years old with a fast flowing subterranean river, it only became internationally known in 2009. It’s the perfect subject for WOWOW Inc’s 4K documentary series with an experimental 8K broadcast. For the documentary, Sony’s FS7 II Super 35 camcorder was the production’s first choice. Able to shoot high quality 4K at a cinematic 23.98P, the FS7 II is also robust enough to withstand the harshest conditions and has an ergonomic design ideal for shooting on uneven terrain. Alongside the FS7 II, an α7S II was used for shooting in ultra-low light conditions. We talked to production director Sota Koshino and camera operator Masahiro Hariu about their impressions of the FS7 II.

An opportunity realized after 7 long years

Koshino: The locations selected for this collaboration with WOWOW are mainly those never before captured on film. Our aim is to portray these places using state-of-the-art equipment and each episode actually features the filming crew as protagonists. Our first documentary was to reproduce the famous “Earth is blue“ quote. To do this we visited NASA in Florida and flew jet fighters into the stratosphere. And since we went up last time, it made sense to go down and shoot a cave. I first found out about Sơn Đoòng Cave in 2010. I was amazed and began talking with our writer about shooting there. It took 7 years, but we were finally able to realize this dream with a crew of 70 in March 2017. 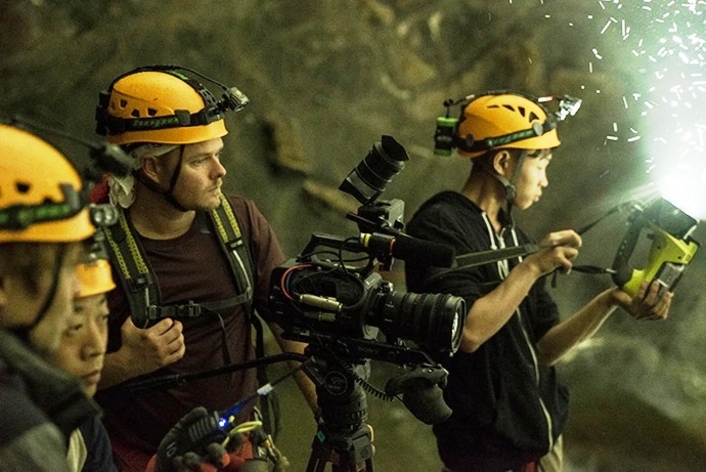 I felt that a camera like the FS7 II, that is capable of filming both cinema and documentaries due to its exceptional flexibility, is the best choice.

Koshino: The entrance of the Sơn Đoòng Cave is a large vertical cavity that resembles a giant chimney approximately 70m deep and a large amount of vapour is spewed from the cave along with cold wind. The crew had to descend this chimney in pitch black and then faced a hike of about 10km – to reach the end of the cave system and return. Filming took a total of 10 days including preparations and we camped within the cave for four days to film enough material for the documentary. 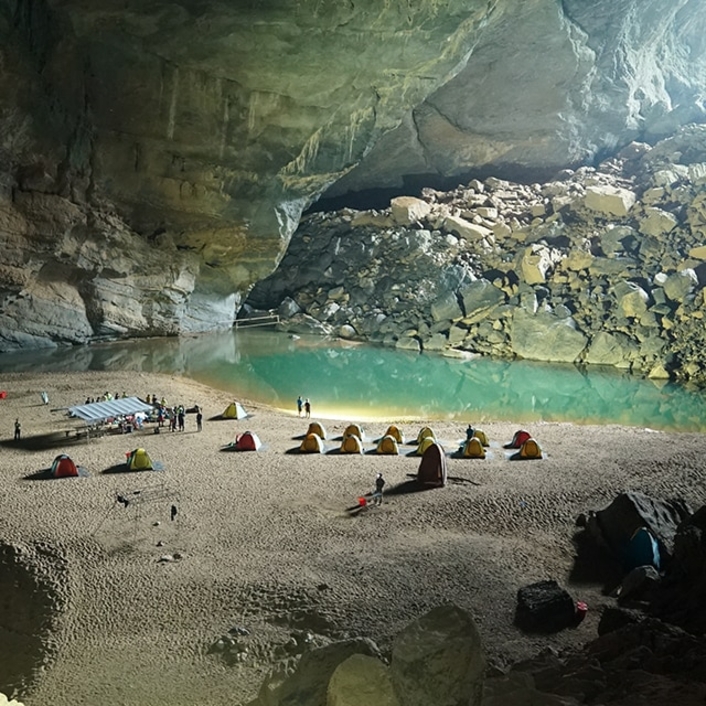 Koshino: We also had to be very careful where we stood – due to wildlife conservation there were many restricted areas. Fortunately, the local Vietnamese staff we hired were familiar with this and carrying equipment in these kinds of environments. Transportation of the equipment was split across four people; one person each for equipment including tripods, lens, cameras, and batteries.

Choosing a camera for challenging conditions

Koshino: Humidity and temperature difference was a major issue inside the cave. Humidity within the cave was 90 to 100% at all times.

Hariu: We had prepared various methods to keep the equipment dry before departing, but after being in the cave for 4 days, everything became damp. We even took handmade battery powered fans that we thought would keep our lenses and cameras dry, but that didn’t work as we expected. In the end, we just decided to keep everything open and allow the lenses to become accustomed to the environment. If the air outside and pressure are changed abruptly, each lens would become subject to condensation. If this happens, we would need to heat the lenses up for about 20 minutes, so we decided to allow them to be exposed to the outside air.

Koshino: Our choice of equipment was based on whether they could withstand this kind of harsh environment. The location had horrible footing and there was barely any spot that was level, so the ergonomics and robustness of the camera was as important as the image quality. In the end, the FS7 II was the ideal choice.

Koshino: When filming projects like this that require 4K or 8K, cinematography cameras are usually the ideal choice, but when filming documentaries, lightweight cameras with high manoeuvrability are what we need. With this in mind, our immediate choice was the FS7 II. The reason is that we had taken the PXW-FS7 with us as our handheld camera when we went to the stratosphere for our previous project. When entering the stratosphere on a fighter jet, you receive a G-force of about 5 to 6G. Under these circumstances, sensors on consumer cameras malfunctioned, but there were no problems with the FS7. Its toughness and stability in harsh conditions made it extremely reliable. I was actually on the jet filming from my point of view with the FS7 and filmed in RAW format using a wide lens by fixing the PMW-F55 to the dashboard. As the actual time available for filming was limited to 5 to 10 minutes in the stratosphere, we selected a camera with flawless performance that fulfils the quality filming requirement within the limited time. That camera was the FS7. So when we faced another challenging shoot, FS7 II was the obvious choice. 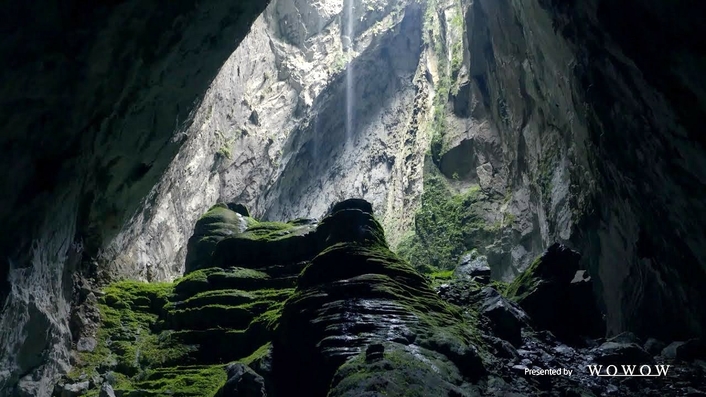 A mix of high mobility and cinematic feel

Koshino: Compared to other cameras, FS7 II is well balanced and easy to handle when used handheld or with its telescoping arm. I believe the camera was really well designed to fit different applications, different users. This was really obvious to me on this shoot when the footing was so often bad, when we needed to react so swiftly to get a fleeting shot. If we’d used a cinematography camera, we may have missed some great moments since most of our time would have been spent in preparation. Using the FS7 II, we were able to film a large quantity of excellent material that gave us lots of good choices in editing. I can honestly say that I was glad we had the FS7 II. Also, due to the sensor size, we were able to achieve a flawless cinematic feel.

Hariu: I particularly like the FS7 II’s electronic variable ND filter which enables you to steplessly change the brightness while keeping the aperture value fixed. When shooting documentaries, it can be quite difficult using filters and a matte box, so I was very grateful to avoid this with FS7 II.

Koshino: During this project, we didn’t have much time to set up the camera due to the environment. There were many instances where we had to get to the next location before the sun went down or by a certain time. There also weren’t too many spots where the tripod could be set within the cave. And to top it off, most locations were too dark to see anything and one filming location was right next to a 50m cliff. Under these circumstances, I felt that a camera like the FS7 II, that is capable of filming both cinema and documentaries due to its exceptional flexibility, is the best choice.

Koshino: A key benefit of XAVC was how it enabled us to film for long periods of time while maintaining quality. Another advantage is that clear filming is possible even in dark and low sensitivity environments using S-Log. This helped with our documentary, of course, but we also create 8K demo content by using 4K images filmed with FS7 II resized to 8K. The difference is detectable if inspected closely, but I feel the image quality is in no way inferior to that of 8K material when used in combination. When inspecting the FS7 II material with our technical lead, we often decided that the imagery was good enough. 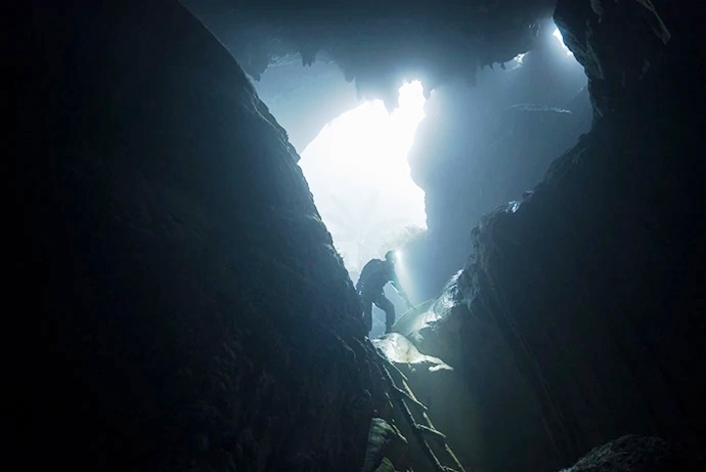 How to faithfully relay images as seen by the eye

Koshino: Our primary objective was to faithfully convey what we actually saw with our eyes. The filming location had little light so we filmed in the base sensitivity ISO2000 using S-Log3.

Hariu: When we used more than one camera, we attempted to balance the tone even if the gamut was different, but since it is impossible to completely match the colours 100%, we accepted the content as is, making adjustments to a reasonable extent on-site to get the best out of the camera we brought with us.

Koshino: We shot at 23.98P so a cinematic LUT was also considered and we experimented with making the picture more vivid, but since this is a documentary we went back to a more naturalistic look. Our objective was to faithfully reproduce the feel of the actual lights and colours we experienced in that environment. Under these circumstances, the wide dynamic range and S-Log of the FS7 II were exactly what we needed. Even if there were segments that exceeded the dynamic range of the camera, we accepted them as they actually looked that way through the naked eye. In the sense that we wanted to faithfully reproduce what we saw, there was absolutely no problem with them. I believe the highly robust FS7 II with its excellent image quality and ergonomic ease of use was the perfect camera for filming within Sơn Đoòng Cave ‘s harsh environment.