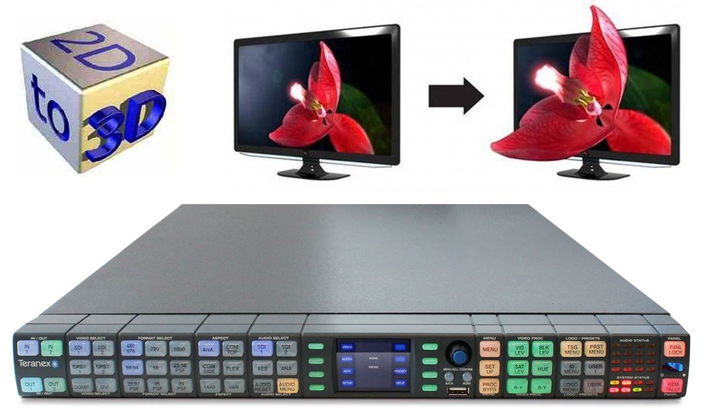 Teranex VC100
Preco reports a positive and enthusiastic reaction to the Teranex VC1-2D-3D stereoscopic image generator which made its UK exhibition debut mid February at Broadcast Video Expo in London. Continuous demonstrations of the system were held throughout the show, led by Teranex General Manager Mike Poirier.

"Every visitor who came to the stand was wowed by the effectiveness of the demonstration, which included 3D renderings of the Apollo 13 mission as well as Hollywood film footage," comments Preco's Director of Engineering and Technology, James Thomas. "Their response to the VC1-2D-3D's capabilities were very encouraging, particularly from network managers considering the introduction of 3D services or already running them. Before long, every television receiver sold will be capable of displaying 3D. The VC1-2D-3D runs on the extremely powerful Teranex VC100 processing platform, programmed to generate real-time depth information from spatial and temporal clues derived from 2D video content. This allows it to deliver credible 3D without the visual distraction seen in less advanced systems. The VC1-2D-3D is ideal for networks who want to include monoscopic source material into their stereoscopic programmes during the transition between 2D and 3D broadcasting. The system has already been chosen by ZDF in Germany for converting selected 2D content into simulated 3D."

"Strong interest was also shown in the Logitek JetStream Mini audio mixing and IP-based networking system," adds Sarah Lenson, Preco's Commercial Manager. "It brings digital audio mixing within reach of educational studios and community-radio stations for whom the majority of existing systems were simply too expensive. The JetStream Mini is designed for use with the Logitek range of control interfaces and can be configured for single or multiple studio operation, handling console functions as well as audio networking duties throughout a facility."