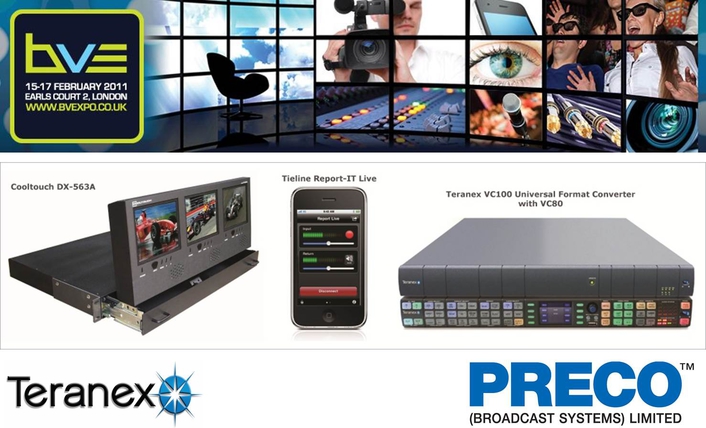 It also offers the ability to insert 3D logos with adjustable horizontal, vertical and depth position. Two encoding/decoding processors are also available. The VC1-3D-ENC encoder converts 3D image content into stereoscopic formats such as side-by-side, top/bottom and checkerboard streams. The VC1-3D-DEC decodes from these formats back into separate right and left image channels.

Recent additions to the Cooltouch range of rack-mounting and stand-alone monitors will be exhibited, including triple and dual screen video/audio systems in 1 U pullout drawers. The Cooltouch DX-563A, with three 5.6 inch LCD screens plus loudspeakers, is one of the most space-efficient monitoring systems on the market.

A revolutionary new development for radio and television news reporters, Tieline's Report-IT Live turns an Apple iPhone into a high quality bidirectional audio codec. Released recently, it has already been embraced by many leading networks. "This is one of the most efficient production tools ever developed for news acquisition," comments James Thomas, Preco's Director of Engineering and Technology. "It turns an iPhone into a wireless IP audio codec and recorder. Report-IT Live allows live two-way interviews between talent and studio without need for additional recording and interface equipment. Audio contributions can also be prerecorded, trimmed and forwarded via FTP direct to the studio via a 3G link or wireless IP. Live content can also be interspersed with pre-captured clips called from a playlist."