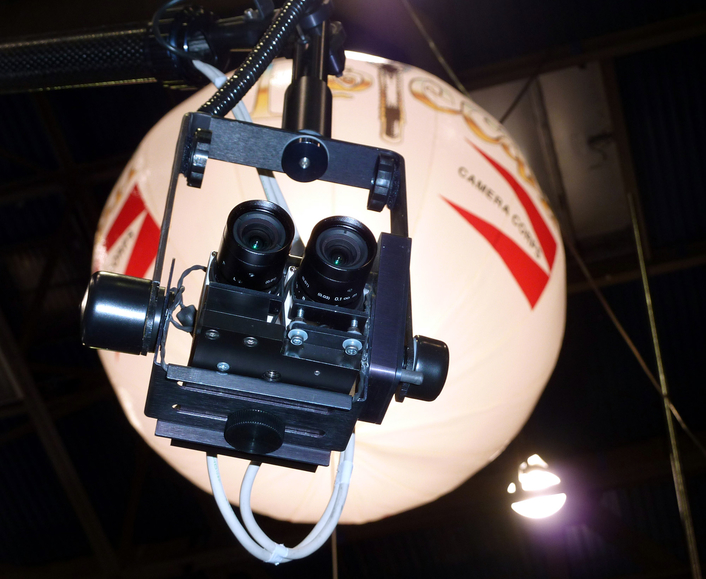 3D Polecam
"You have the best 3D in the entire show," commented visitors to Polecam's demonstrations at the April 2010 NAB Convention in Las Vegas. With many exhibitors navigating through the minefield of shooting 3D through variable-magnification optics, Polecam clearly illustrated the advantages of deploying prime lenses and moving the cameras towards the subject rather than zooming into close-up.

"We turned a lot of heads at NAB by showing how to avoid the most obvious pitfalls of 3D production," details Polecam founder and Managing Director Steffan Hewitt. "Our approach to 3D, developed over several years and already used on-air, follows the KISS principle: Keep it Simple". The Polecam live 3D technique consists of two Toshiba IK-HD1 ultra-compact HD cameras mounted side by side on a 3D Head feeding two camera control units mounted at the base of the rig. Each CCU sends HD-SDI to an Inition StereoBrain creating an integrated 3D signal which is then fed to a stereoscopic display. The monitor employed at NAB was a 46 inch JVC GD-463D10 LCD screen using Xpol circular polarization for natural 3D reproduction. Few other exhibitors came anywhere near the degree of realism we demonstrated. And it really is not complicated. We lock both cameras down and use roll and tilt at the front to achieve the required pixel-to-pixel alignment. When shooting content to recorders, we tend to capture images with the cameras in parallel and adjust in post. For live shooting, the Polecam 3D rig allows adjustable convergence control between takes by the operator. The standard lens aperture range is f2.2 to f16 and a single motor drives the iris on both lenses and the two cameras are genlocked to each other."

"Using prime lenses gives us massive depth of field," adds Greg Salman of Polecam USA. "If 3D producers choose to deploy zoom lenses, these need tracking and racking which in turn requires a much bigger, more complicated and more expensive rig. Using the Polecam system, the boom is the zoom. Our side-by-side system is compact and lightweight, giving great creative freedom. With the cameras spaced at about 40 mm interocular distance, we delivered solid 3D from foreground content right through to the far depths of the Central Hall with no need for intermediate adjustments. We achieved such high realism that you could easily imagine you were looking in a mirror. And the costs we are talking about are way below the competition."

Polecam's 3D-Narrow head attaches directly to all standard Polecam rigs. It is designed for normal studio shooting and close-ups where cameramen need to match normal human eye spacing. Setup is quick and easy, conforming to Polecam's strategy of ensuring high mobility and operational efficiency. An optional variant, the 3D-Wide head allows the distance between cameras to be extended to 'hyperstereo' which increases the 3D effect for more distant subjects. Polecam's 3D-Narrow and 3D-Wide heads both retain the freedom to achieve sweeping 3D HD sequences that, for the viewer, almost amount to flying.

Polecam was established in 1998 by extreme sports cameraman/director Steffan Hewitt. While directing a series of windsurfing kit commercials in Hawaii, he needed to obtain close wide-angle front sequences of a windsurfer in action, shot from a tracking boat or jet ski. Steffan improvized a rig consisting of a miniature camera on a carbon-fibre windsurfing mast. Returning to Britain, he developed a lightweight go-anywhere rig with a remote joystick controlling a high-precision pan and tilt head. Polecam is now supplied in HD and SD versions with a range of additional options including underwater and 3D pan/tilt heads. Polecam Ltd is active globally from its base near Bedford, England. 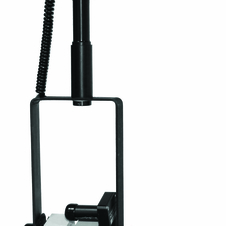 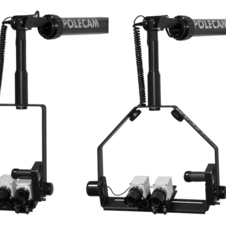