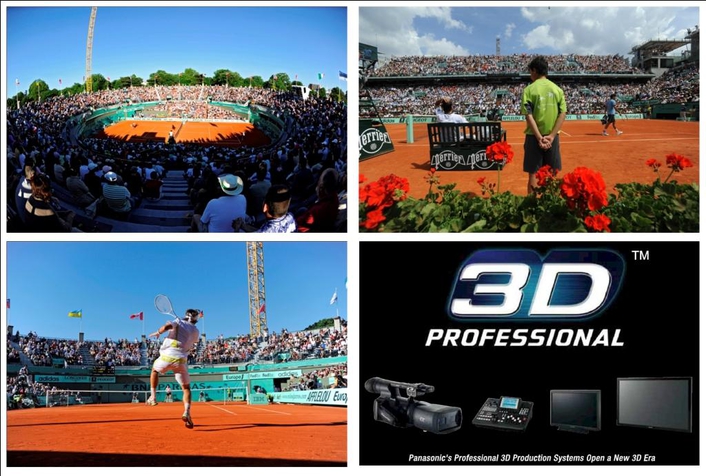 Roland Garros, taking place between May 23rd and June 6th 2010, is one of the most prestigious events in the sporting calendar and is the tennis grand slam with a wide European television audience. Panasonic has formed a joint partnership with the Fédération Française de Tennis (FFT), Orange and Eurosport, to transmit the French Open 2010, Roland Garros, live in high-quality 3D. This will be the first multi-day sporting tournament held in Europe to be broadcast live in 3D. The 3D coverage produced on-site at Roland Garros is broadcasted live via ADSL and fiber to Orange subscribers throughout France, on a dedicated Orange TV channel. Eurosport is receiving the Orange 3D live signal and delivering 3D coverage of the event with the help of GlobeCast via satellite to Panasonic's VT20 3D plasma televisions at about 3000 retail stores in 58 European territories. The signal is uplinked by Eurosport from the stadium to the Astra 1M satellite where it is then downlinked by GlobeCast for delivery to stores via the Eurobird 1. 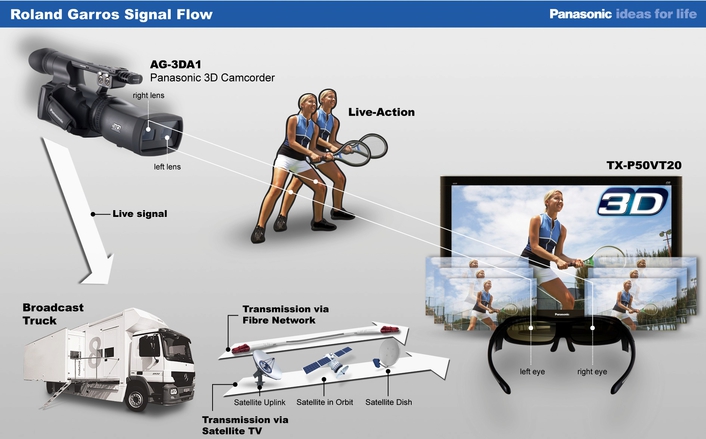 In addition Orange is shooting behind the scenes 3D footage with Panasonic professional Camcorders and create dedicated 3D reports on the field. A special 3D documentary will be produced after the tournament and broadcasted on the Orange TV channel. For Orange, 3D broadcasts represent a huge investment and one that may yield dividends in the long term. But for now, it’s an amazing demonstration of what can be achieved with the technology.

Fabrice Estornel, Product Manager, Panasonic TV Group, commented: “Following the release of our first 3D HD TVs and Blu-ray players, consumers for the first time have the opportunity to enjoy the impact of 3D technology from such a prestigious sporting occasion as the French Open. We really feel that the spectacular live coverage displayed on our TV’s spark the audience’s imagination and viewers enjoy exquisitely beautiful images with an incredibly powerful 3D effect.”

Laurent Eric Le Lay, Chairman & CEO, Eurosport Group explained: “By adding another dimension to live sports broadcasting, the viewing experience of audiences across Europe will be totally enhanced. During the next fortnight, we will bring the immersive experience of being court-side at The French Open directly to television screens. Our collaboration with Panasonic and Orange will set a standard for the future of sports broadcasting.”

Juliet Bayliss, GlobeCast Director of Sales said, “GlobeCast has been delivering HD feeds of the Roland Garros to broadcasters for many years and we are very excited to be working with Panasonic to take this to the next level with such a unique 3D project.”

Ghislaine Le Rhun-Gautier, 3D Project manager for Orange, commented: “Roland Garros is the perfect event for Orange to launch its first dedicated 3D TV service in France, as it is also the place where we’ve first experimented live 3D broadcasting in 2008 and 2009. Our aim is to offer our customers innovations that revolutionize how they explore and access content across all our platforms. With 3D, Orange now takes TV experience to the next level.”

Michel Grach , Media Director of Roland Garros added : “From the early days of sport on television, the Roland Garros tournament has always been at the forefront of innovation, and we are particularly proud that the French Open are the first tennis event to be showcased so extensively in 3D. Our mobile clay surface makes 3D images all the more impressive, and tennis fans throughout the world will experience our sport as they never have before. Bringing together such diverse fields of expertise within the family of tournament partner like Panasonic - with such an exciting common goal - has set new benchmarks in technological cooperation for sport, and shows great promise for future developments and further ground-breaking innovation.”

The market for 3D entertainment has taken off in the last 18 months, with industry analysts anticipating that 2010 will be the breakthrough year for the technology as it becomes available for home-use. An estimated 1.2 million units will be sold this year, according to research unit DisplaySearch, but that figure will rocket to 15 million units in 2013. According to Screen Digest’s research, a quarter of households in major Western economies will have a 3D capable TV in the home by the end of 2014. However this level of consumer penetration is dependent on the availability of high-quality content to influence purchasing decisions. Alongside soccer, American football and golf, Screen Digest expects the live broadcast of major tennis tournaments to be a major driver for the 3D industry.

The Hollywood film studios have been quick to embrace the technology, led by the science-fiction epic Avatar, while Sony has signed a deal with FIFA to record and broadcast as many as 25 matches of the upcoming World Cup in South Africa in 3D.

But in addition to the live 3D broadcast of the UEFA Champions League Final by Sky Sports to pubs and clubs in the UK and Ireland on May 22nd, Roland Garros is the first major sporting event to benefit from the technology during the two weeks tournament.