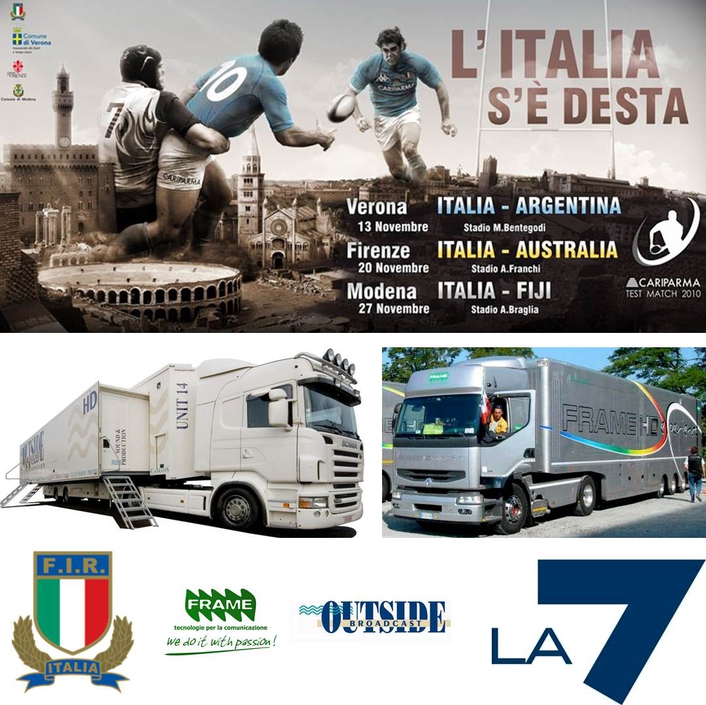 Outside Broadcast NV will deploy its Unit 14 in 3D, equipped with the latest 3D state-of –the –art material : 1 side-by-side camera and 5 3D cameras on mirror-rigs (swissRig). Our experienced 3D team consists of a stereographer, cameramen, convergence operators, vision engineers etc.

In 2009, the first 3D transmissions were done by Outside Broadcast NV at the Golden League Athletics in Brussels. After several successful 3D-football games, Outside Broadcast NV was chosen to produce the Final of the Champions League in Madrid. With these excellent references, Frame Italia chose to work with this Belgian partner for these spectacular sport events.

The 3D content will be broadcasted live in Italy at “La7”. In Italy is it the first time such an event is broadcasted live and for free. A remarkable 3D-broadcast to several Italian cinemas will be held on Saturday, November 20th. The 3 test matches will be played each time at 3PM and can be watched in Italy live in 3D at channel 527 at La7. Italy- Argentina (Verona-Nov 13th), Italy- Australia (Firenze, Nov 20th) and Italy-Fiji Islands (Modena, Nov 27th).

About Outside Broadcast NV- Belgium

Founded in 1989, Outside Broadcast NV started to build its reputation of a first class service provider in a variety of work, from small daily soap productions to large music or sporting events. In 2002, Outside Broadcast NV believed that High Definition would be the standard for the next decade, and invested in a full blown HD Truck. As a European pioneer in HDTV facilities, Outside Broadcast started to produce European-wide for broadcasters all over the world.

As HD have gained ground within just a few years, Outside Broadcast NV was confident that 3D would be the near future and reinforced its early adaptor position by launching in 2009 the 3D-converted Unit 14, which features state-of-the-art 3D production equipment.

Outside Broadcast’ OB-Trucks are built by the people who operate it! Design and furniture, engineering, cabling and system integration are done entirely in-house. Outside Broadcast believes that this unique approach results in reliability and comfortable working areas for all production staff involved in outside broadcasts. Today, all units & equipment is multi-format, capable of all high definition & 3D formats.With a fleet of HD and 3D-capable OB trucks, Outside Broadcast NV has the capability to cover any event. With an unquestionable track record in high-quality live productions and more than 20 years of experience, some of the biggest music, sports and entertainment events are among Outside Broadcast’s NV credits.