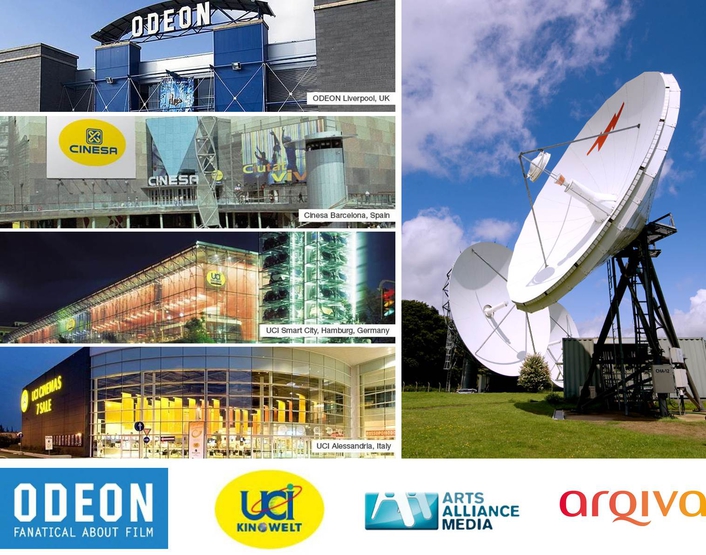 Barrie Woolston, Commercial Director at Arqiva Broadcast & Media, said: “Odeon UCI’s decision is a massive endorsement of our Digital Cinema Satellite System both conceptually and technically. Its deployment across close to 100 Odeon UCI cinemas represents a considerable growth of our network and greatly reinforces our presence in key European markets – especially Spain and Italy. Indeed the ever growing momentum of our roll out leaves little doubt that Arqiva’s Digital Cinema Satellite System is the preferred electronic delivery method for European exhibitors - including leading names like Odeon UCI.”

Drew Kaza, Executive Vice President of Digital Development for ODEON and UCI Cinemas, added: “Our decision to deploy Arqiva’s Digital Cinema Satellite System helps keep our cinema circuit at the cutting edge of cinema distribution. We believe that electronic delivery by satellite brings us key benefits and is the way forward for cinema distribution – and that Arqiva is an ideal technology partner for Odeon UCI.”

• Arqiva, on behalf of Arts Alliance Media, has provided Outside Broadcasts and satellite services for a live cinema event ‘Chasing Legends’

• Deluxe Digital London in agreement with Arqiva to use their European Digital Cinema Platform for the electronic delivery of Digital Cinema Packages (DCPs) from international studios to cinemas across Europe.

• Arqiva has signed a partnership with Italian Digital Cinema distributor Microcinema to use Arqiva’s Digital Cinema platform on the Intelsat IS905 satellite to deliver live alternative content to its network of around 100 cinemas in Italy.