Six 3D rigs capture rock opera from Paris stadium for Korean broadcaster
A thrilling show, which has been wowing audiences in Paris since the beginning of November, is set to captivate an international audience thanks to 3ality Digital and ARRI Media. Mozart l’opéra rock (Mozart – the rock opera) was shot in stereoscopic 3D by SK Telecom from Korea, first for cinemas across Europe then for global release.

The show was staged in the massive Palais des Sports in Paris in front of 4500 spectators each night. To capture the scale and excitement of this modern French musical SK Telecom was using six 3ality Digital camera rigs and stereo processors, some supplied from London by 3ality partner ARRI Media, the rest from 21 Digital in Korea. Euromedia France was providing its 3D-layered outside broadcast truck XXL3. 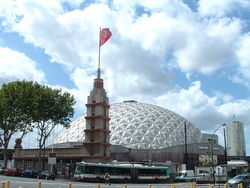 The crew shoot the performance on 21 December in the Palais des Sports, which is on the edge of Paris at Porte de Versailles. Apart from an orchestral rehearsal that afternoon the team had only one chance to get it right, so need to rely completely on the excellent performance of the technology.

Bill Lovell of ARRI Media added “We expect to see increasing numbers of projects like this, where live events can be seen by much larger audiences through 3D digital cinemas, and through television. Recently we supplied a 3ality 3D system and ARRI Alexa cameras for another shoot in London, featuring the dance group Diversity, which was seen on the Sky 3D channel in the UK over Christmas.”