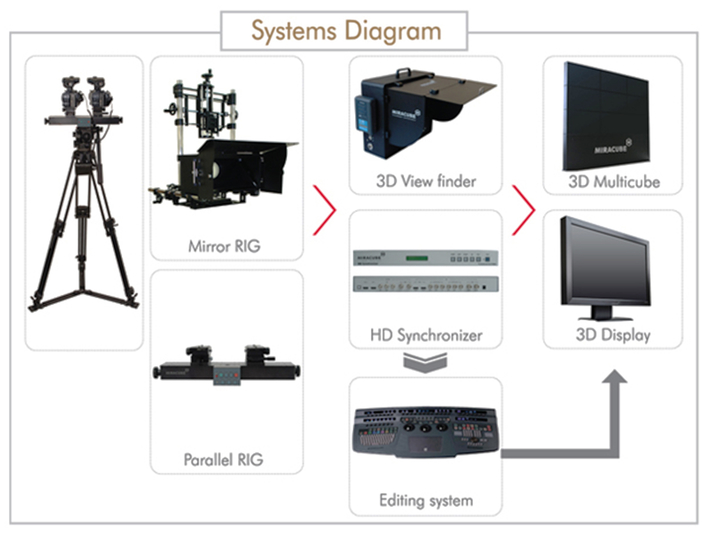 Stereoscopic 3D Studio System by MIRACUBE
MIRACUBE, an emerging leader in the 3D stereoscopic industry, announced today that they will introduce “3D ViewFinder Box” which is the first product of its kind in 3D market. The product is equipped with a synchronizer that converts 2 inputs into 3D formats and a 15.2 inch 3D monitor all in one body. “It will be the most convenient mobile 3D visualization tool for DP’s for field uses especially with its easy carry handle,” says Craig Lutzer, Director at Miracube Inc.

MIRACUBE is featuring its 3D Studio Systems at NAB Show 2010 in Las Vegas from April 12–15, 2010 (South Upper Hall Booth#SU2424). A 3D Camera Mount, a 3D ViewFinder Box and a 3D Monitor will form a studio system that will enable one to create 3D contents easily. The side by side 3D Camera Mount is operated easily by motor and its LANC controller will synchronize the two cameras. The 3D ViewFinder Box receives HD-SDI inputs from the cameras and does the conversion to display on the monitor.

Miracube 3D LCD Displays feature a wide range of user options that make 3D viewing as easy and enjoyable as never before. All displays can be switched between 2D and 3D, and incorporate a special 3D Formatter technology that is compatible with the major 3D content formats. Also, the 3D Display is completely flicker-free and keeps a high resolution image. The viewers can also move around the screen without any restrictions.

At NAB Show 2010, MIRACUBE will introduce its latest technological development, a new 3D Display technology that will bring further improvement in brightness, viewing angles, viewing distance and simplicity of the manufacturing process. Unique MIRACUBE WGP (Wire Grid Polarizer) display technology eliminates any limitations regarding the viewing angles, allowing the viewers to see a perfect 3D result. It also eliminates any limitations for the viewing distance in order to allow the viewers to receive the same great quality even from very close range. 3D Wire Grid Polarizer LCD will also revolutionize the manufacturing process of 3D displays, making them easily affordable for a mass consumer market.

With 3D feature film and animation production taking off and the increased informational value being recognized in fields from CAD design to medical imaging, 3D is the exciting next step in the evolution of display technology.

Currently, the company has partnerships with Assimilate, 1Beyond, Iridas, Vision Research and Teranex at NAB 2010 with its 3D displays.