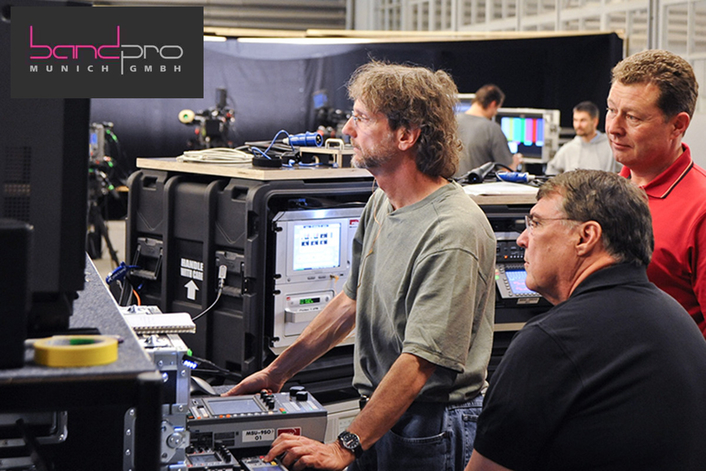 Fred Meyers flanked by Band Pro’s Jeff Cree, and Ralph Herzog, of FGV Schmidle
In a stunning turn of events, Northern California native and acknowledged production engineering expert Fred Meyers, who recently worked on George Lucas’s independent feature Red Tails, is joining the Band Pro team. Meyers will serve as Director of Production Engineering for Band Pro Munich, and be available for on-set consultation or to create workflow for productions that require his expertise.

In technical production since 1969, Meyers is known for innovative work and developments that helped grow ILM into the state-of-the-art production/post production facility it is today. After leaving ILM in 2006, Meyers began to see a disturbing trend in the industry. “As the required amount of time to do the engineering work for projects is reduced, it becomes more difficult to get technical information for testing and good recommendations from people who do the production engineering work,” Meyers says. “There is a compromise for how well things can be done.”

“A good production engineer translates the creative needs of a project into technical requirements and interfaces with the facilities to complete the process as smoothly as possible. A producer or creative team needs someone to walk them through the process and make recommendations on what equipment and facilities to use and where to get the equipment. I looked at the way things are becoming for independent production and it makes sense to me that some of that production engineering work could be done independently of the production itself. A company like Band Pro can offer some of those services alongside their equipment.”

Meyers sites Band Pro’s access to cutting-edge technology provided by top equipment manufacturers as one reason the company is in demand. “Band Pro is able to provide consulting, evaluation, testing, integration and ideas that can be a real benefit to any project,” he explains. “They also work with manufacturers to tell them what they need to do to make their equipment more usable and user-friendly. In this way we can help the manufactures make better products and provide our customers with more information and support. What could be better for the whole production workflow?”

Band Pro’s clients can now take advantage of Meyers’ years of experience in developing a consistent and supportive workflow, which includes pioneering high-end 2D and 3D graphics for video-post-production in the Bay Area through the San Francisco Production Group. He was a main force in building the video engineering department, designing electronic dailies and digital editorial systems for Industrial Light & Magic. While at ILM he expanded their production engineering department, combined editorial, video and production software groups to service the computer graphics and digital productions and then went on to create history-making images in such films as Terminator 2 and Jurassic Park. He also led special projects at ILM and Lucasfilm, including development of 24P high definition video workflow that enabled Star Wars II Attack of the Clones to be the first major motion picture shot, posted, mastered and released using an HD pipeline. He also led pipeline refinements by introducing 4:4:4 camera and recording systems on Star Wars Episode III.

Since Meyers left ILM he has pursued projects that embraced digital and 3D cinematography, including Journey to the Center of the Earth 3D. He has also provided HD and engineering supervision and consultancy on Speed Racer, Yogi Bear (3D) and most recently Lucasfilms’ Red Tails. Meyers will be based out of Band Pro’s new production/post production satellite facility in Prague, Czech.

Band Pro Film & Digital, Inc. specializes in products and solutions for professional filmmakers and videographers. From their offices in Burbank, CA; New York City, NY; Munich, Germany; and Tel Aviv, Israel, Band Pro offers the highest level of knowledge and expertise along with the finest equipment and accessories available. The company’s research and development protocol allows product lines to expand toward the newest technologies so clients can focus on the art and craft of cinematography. With close relationships in Hollywood and worldwide, and long-standing partnerships with camera and lens makers, Band Pro has remained at the forefront of the newest developments in digital cinema.