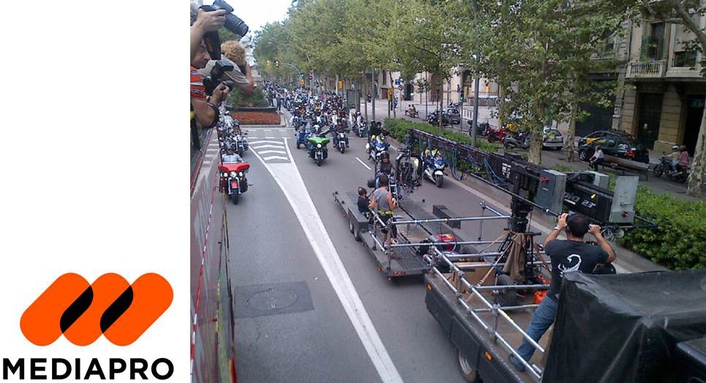 "BCN3D" is filmed with 3D technology, transmedia techniques and is directed by Manuel Huerga
Barcelona from head-to- toe in never before seen scenes in 3D, this is the ambitious objective of the feature-length documentary that Mediapro is currently filming in the city. Directed by Manuel Huerga and written by Lluís Arcarazo, the filming of “BCN3D” has taken place in two of the city’s big events in recent weeks: the Harley Davidson meet with 15,000 motorbikes attending the event and the launch of the Grec summer festival.

The resources available to Manuel Huerga for “BCN3D” are at the cutting edge of audiovisual technology and include EPIC network cameras (used in super-productions such as “The hobbit” by Peter Jackson), Technocrane, steadycams, Segways, helicopters, spydercams and computer-generated images: an impressive display hitherto unseen here in Spain for the capture of spectacular images for the documentary.

“BCN3D” is also using the latest stereoscopic technology, as well as transmedia techniques to maximize the project’s impact both on cinema screens as well as TV, Internet, social networking sites, mobile telephones and even videogames via enhanced reality images as well as reaching the target audience via more traditional means (a 3D book or the film in 3DBluRay format).

Mediapro has invested heavily in innovation and technology in the audiovisual industry. It was a pioneer in Europe in the adoption of high definition and is currently one of the leading companies in the use of HD technology.