MEDIAPRO produced HD and 3D Signals of the Barça-Madrid Match (5:0) 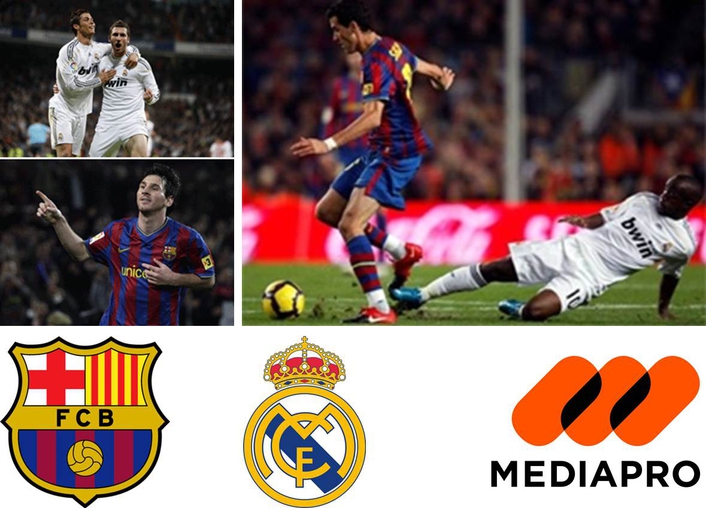 The football match between FC Barcelona-Real Madrid has gone global. The Monday night game has not only seen an increase in demand but for the first time was broadcasted in nearly every country around the globe. The world-wide broadcast was made possible as a consequence of the agreement reached by MEDIAPRO and international channels. The TV audiences were bigger than the ones achieved with previous matches as TV viewing is typically higher on Mondays than at the weekends.

MEDIAPRO had prepared an impressive technical and human deployment and provided best match coverage. More than 300 staff and 32 cameras in the stadium, 16 at pitch-side, two SuperSlowMotion cameras, a Steadicam and two beauty cameras for panoramic shots of the stadium. 6 HD OBVans guaranteed the high quality coverage of the Barcelona - Real Madrid match on Monday 29th November. MEDIAPRO provided services for CANAL + France, BSKYB, ESPN, GOL TV USA and Al Jazeera for its unilateral signal. GOL TELEVISIÓN had additional 6 cameras at offering its subscribers exclusive images of the match. MEDIAPRO and GOL TELEVISIÓN will be providing all their technical and personnel skills for the very best coverage of one of the most exciting matches of recent years. Match production was carried out by Óscar A. Tomàs, one of Spain’s most accomplished producers of sporting events.

MEDIAPRO also produced the signal in 3D to a host of international channels. The signal of eight 3D cameras supplied six international channels: B Sky B (England), Sky Italy, NTV Plus (Russia), WOWOW (Japan) and channels in Hong Kong and Poland. The event also was watched in 3D at the Spanish Parliament in Madrid. This event was organised by Media Sports Marketing and sponsored by SEAT, MAHOU and Liga BBVA.

Media Sports Marketing will organise 3D screenings of the best matches of the BBVA League in cinema-like event conditions. All the 3D matches will be carried out at strategic spots. The first broadcast will be sponsored by Seat, Mahou and BBVA. Over the course of the 2010/11 season, Media Sports Marketing will organise the 3D broadcasts of the most attractive matches from the BBVA League under cinema-like conditions and with commercial sponsors.

The top match always will be screened in the visiting team’s city. The 3D match yesterday took place at the Congress building in Madrid. The 3D broadcast is an ideal public relation event with high added value for the guests of the sponsoring companies. A digital cinema projector with an 80m² screen and Dolby 5.1 sound and special 3D re-useable glasses for the up to 500 event attendees will create an impressive viewing experience.

The sponsors will have additional space for the welcoming of their guests and for catering services and other promotional activities.

All the 3D productions will be carried out with technology developed by MEDIAPRO, Medialuso and Kronomav’s R+D department. MEDIAPRO will deploy eight 3D camera pairs for all the matches and the transmission will be carried out in HD side-by-side format. The 3D production is one of the biggest challenges for the MEDIAPRO R+D department. The technology developed include tools such as the calibration system and the analysis and automatic correction of 3D stereoscopic camera signals in real time. 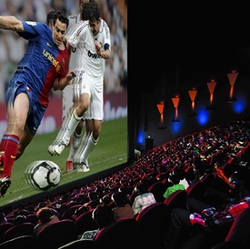 Monday saw the start of the cinema football season. The Cinesa, Yelmo, Kinépolis, Vircas, Dreams Palacio de Hielo, ACEC, Circusa and Arinco chains will show one match per week in their cinemas around Spain: a total of 73 cinemas, with 81 screens and 25,000 seats available. The High Definition signal will be projected on a giant screen with Dolby Digital sound offerering superb viewing and listening quality. On all the subsequent match-days, the cinemas will be able to choose a match for their cinemas.

The HD cinema projection allows viewers to enjoy all the excitement of the match on a giant screen with impressive picture quality. In addition, the Dolby Digital sound without commentary allows viewers to hear sounds such as the football being kicked, an impossibility even from the stands. All of this makes it a tremendous viewing experience with the feeling of being part of the action.