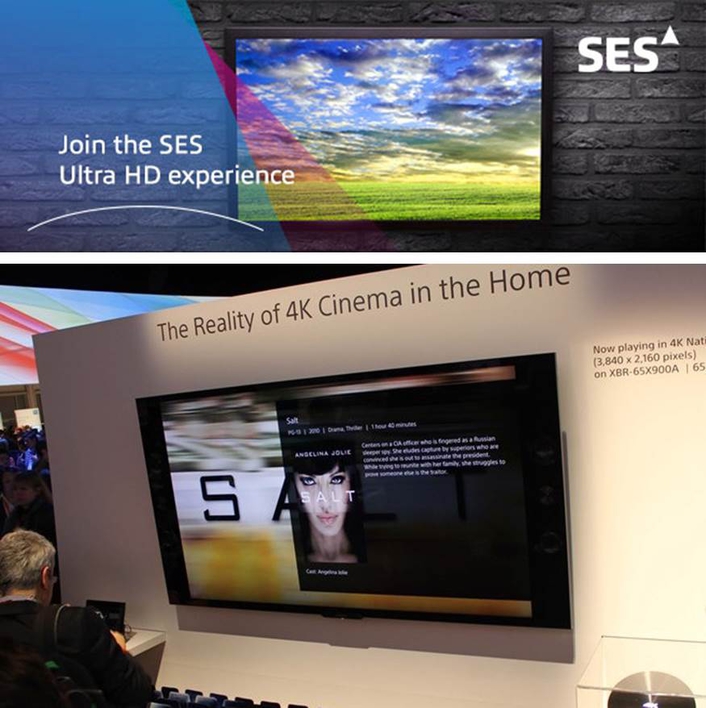 .
Annual conferences that are key to the TV and broadcast industries saw UltraHD as the “talk of the shows” and the stage by which to unveil key developments. A number of announcements were made, but the most important in NSR’s view in terms of impact for the satellite industry are the following:

•    Intel unveiled its next-generation Thunderbolt technology, which raises the data rate from 10 Gbps to 20 Gbps in both directions; this addresses the issue of distribution and bandwidth constraints specifically in getting 4K content to operate with existing workflows. 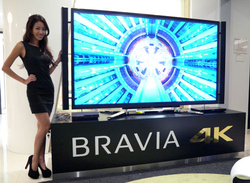 These announcements are likely to generate highly positive impact in terms of the UltraHD ecosystem. Sony’s price points should lead to even lower price offerings when the UltraHD market begins around the 2015 timeframe.  Competition from Samsung and other TV manufacturers could lead to below $1,000 UltraHD TV sets, enabling mass market adoption within five years.  Intel’s chip enables enhanced processing, which aids in the content generation and distribution aspects.

These non-satellite industry initiatives will positively impact the satellite industry as UltraHD content needs to be distributed to video headends as well as support DTH offerings.  Seeing the initiatives, the satellite industry anted-up as well:
•    SES announced the launch of its "SES Ultra HD Experience" initiative, which invites content providers and broadcasters to work with SES to support the development of the UltraHD value chain. SES aims to support content providers and broadcasters in testing their UltraHD footage and distributing their content before UltraHD becomes a commercial reality. It is worth noting that competitor Eutelsat introduced a demo UltraHD channel in January.

Developments in compression, which remains key to help complete the picture, are likewise taking place. High-Efficiency Video Coding (or HEVC or H.265) is the next-generation video-compression standard that was standardized by MPEG in January. It is likely to play a major role in the delivery of 4K as it could reduce the bandwidth necessary to deliver video by up to 50%. Moreover, more-efficient transmission technology is in the works as well where DVB is setting the new satellite terrestrial standard that improves DVB-S2 satellite-transmission technology, which could add 20%-25% increase in efficiency. If HEVC and DVB-S2 are utilized in the delivery of 4K, a compelling business case in terms of cost could be justified.

The UltraHD industry and satellite push are still coming from Western Europe as well as East Asia. However, the entrance of Intel from the United States may be a strong signal that the ecosystem in North America will develop at a faster pace.

Bottom Line
According to NSR’s recently released UltraHD via Satellite, developments in the UltraHD ecosystem are proceeding where market realization by 2015 seems on pace.  Of all the announcements made thus far in 2013, Sony’s recently released UltraHD TV price points, compression standards and transmission will generate the most impact affecting both the supply side and demand side of the industry. 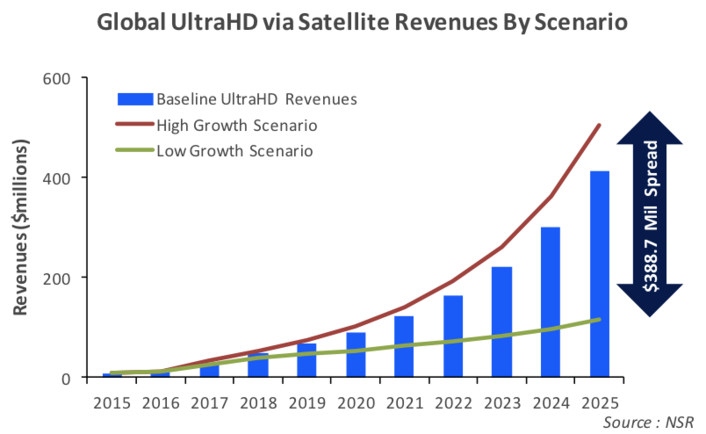 Lower costs in TV sets and set-top boxes on the consumer side as well lower operational costs due to efficiency from the service providers’ perspective should usher in a compelling ROI model and competitive strategy for provisioning UltraHD.  In NSR’s view, the latest announcements improve UltraHD via satellite’s prospects from the Baseline forecast to the High Growth Scenario.  Further developments as significant as the Sony announcement may enlarge or improve market prospects.

Compression, an area where the satellite industry can actively participate through the initiatives of SES, Eutelsat and Hispasat where test broadcasts can be undertaken, should likewise contribute to hastening market development.