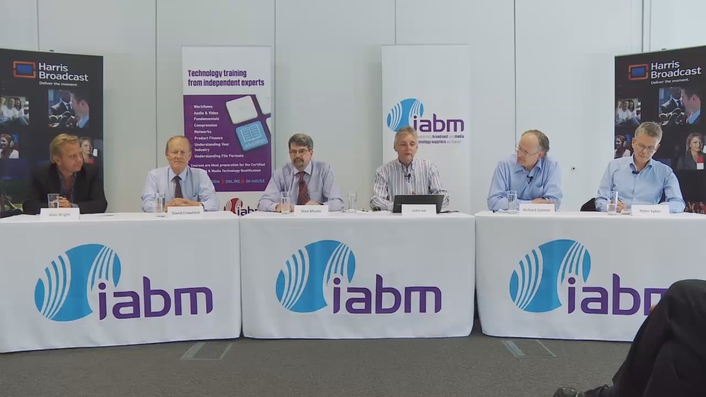 .
The IABM (International Association of Broadcasting Manufacturers) today announced the success of the latest IABM Technology Event, a panel titled "Higher Resolution — Do We Need It?". Hosted June 6 by IABM Director of Business Development and Technology John Ive, the expert panel addressed how resolutions beyond HD have caught the imagination of professionals and consumers, as well as the benefits and limitations that such resolutions present from acquisition to production to delivery. IABM members can view complete video of the panel discussion on the IABM website.

"There is no doubt that high resolution beyond HD was the most talked-about topic at NAB this year, but away from the hype of the industry's largest trade show, we will be discussing the issues that matter," said Ive, introducing the topic and panel. "It's a controversial topic, coming close on the heels of HD and potentially requiring even more end-user investment. Are we on the curve of diminishing perceived quality benefit? Do consumers really care about quality? These questions and many more make higher resolution far from a done deal."

Bright agreed with fellow panelists that sports and "vanity projects" were the leaders in HD and again a sweet spot for the use of higher resolutions. He noted both similarities and differences in the shift to 4K and other high-resolution formats. "There is the issue of acquiring the best quality for future-proofing an archive, which is what we experienced before with the upgrade to HD, but unfortunately, 4K is much more limiting than when we moved to HD," Bright said. "Factors such as how to acquire it and how to record it, frame rates, depth of field — these sorts of issues are very restrictive at the moment and are not allowing the progression to be the same as it was from SD to HD."

"For me, it's that excitement of a new technology, combined with a commitment to a huge existing customer base," added Sony's Sykes, stressing a recognition to support broadcasters who are currently evaluating technology for 4K services, and those that are looking to utilize new 4K production tools to future-proof and add excitement to existing HD services. "For a manufacturer, the important thing is to allow a step-by-step migration to a new technology at the customer's own pace."

"As we take a look at television and it starts to move a little bit more towards 4K and even 8K, I think there will be a convergence because, ultimately, it allows television people to start doing film-type productions, and vice versa," said Moote, discussing the shift of both film and broadcast industries toward higher resolutions. "As far as equipment manufacturers go, this is a very important aspect to think about because it actually opens up new markets."

About the IABM
The IABM, the International Association of Broadcasting Manufacturers, is the authoritative voice of the broadcast and media technology supply industry worldwide. Its wide range of services to members encompasses market research and intelligence, training, expert representation at standards bodies and broadcasting unions, executive networking opportunities, and preferential purchasing. A presence at every major broadcast tradeshow, the IABM also provides a valuable channel for communication among broadcast manufacturers, government, and regulatory bodies. Additional IABM activities include awards programs for innovation and scholarships designed to stimulate the development of the broadcast and electronic media industries on an international basis.