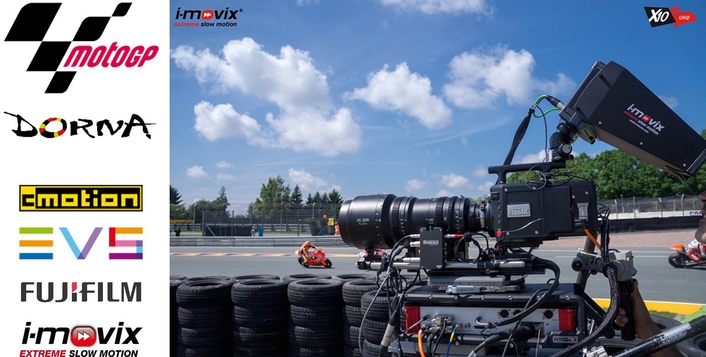 .
Ultra slow motion took a major step forward as a live broadcast production tool, with the world-first use of 4K continuous super motion at the eni Motorrad Grand Prix in Germany. I-MOVIX’s  X10 UHD was used in a variety of innovative ways to explore the system’s potential in both 4K and HD coverage.

“The image quality of the high frame-rate 4K shots was astonishing and a real breakthrough. High frame-rate 4K footage provides image detail and sharpness you can’t get any other way, and it’s clearly a must for capturing new levels of detail in fast-moving sports action such as motorcycle racing,” said Manel Arroyo, Managing Director at Dorna Sports S.L. “With the continuous 10x super slow motion mode in HD at 500fps, the availability of every second of coverage for high-quality super slow motion instant replay opens up lots of new potential for analysis and insight.”

“This was a particularly exciting event not only because it marked two broadcast firsts, but also because Dorna Sports really explored a lot of the creative potential of 4K and HD ultra slow motion in a range of different ways,” said Laurent Renard, CEO of I-MOVIX. “The gorgeous and dramatic images the X10 UHD produces can be used to bring unprecedented richness and sophistication to live sports production.”

Combining the core X10 ultra-motion technology with Vision Research’s Phantom® Flex4K camera, the I-MOVIX X10 UHD supports operation in a range of modes to meet differing production requirements, and can be instantly re-configured for new 4K or HD shooting scenarios.

The Dorna Sports production team tested X10 UHD, combined with an EVS XT3 server and the EVS Epsio zoom solution to explore yet another creative way to use 4K ultra motion in both high frame-rate and continuous modes. Zooming in 4K was used to show very close details on the bikes, or reframe when a crash happened. The combination of the X10 UHD and the Digital HD extraction is also a very attractive proposition for HD productions, either to provide exceptionally beautiful and detailed downscaled HD pictures, or for zooming in without losing HD image quality.

For very high-frame rate ultra-slow motion in 4K sports coverage, the system operates in USM mode to deliver instant replays of up to 1,000fps. For continuous non-stop recording, SSM mode delivers up to 120fps at 2160p60. When operating in HD resolutions (1080p or 1080i) X10 UHD offers up to 600fps in continuous SSM mode, and up to 2,000fps in USM mode. The system can also complement these specialized applications by performing in a conventional live camera role.

X10 UHD’s frames-per-second performance and operational flexibility in a variety of production situations far outstrips the capabilities of other systems on the market today.

X10 UHD delivers all the usability and image quality benefits for which I-MOVIX systems have become renowned. Fully integrated for live broadcast production and easy to operate by any broadcast camera crew, X10 UHD will be specified in an RF version. Optimized for quick setup and efficient operation in exacting production situations, X10 UHD is the most advanced solution with 4K and HD ultra slow and continuous super-slow motion capabilities available for multi-role shooting.

About Dorna Sports
Dorna Sports is an international sports management, marketing and media company, founded in 1988. The organisation has its headquarters in Madrid, with further branch-offices and/or subsidiaries in Barcelona, Rome, Amsterdam and Tokyo. The company’s main shareholders are funds managed by Bridgepoint Capital and The Canadian Pension Plan Investment Board.