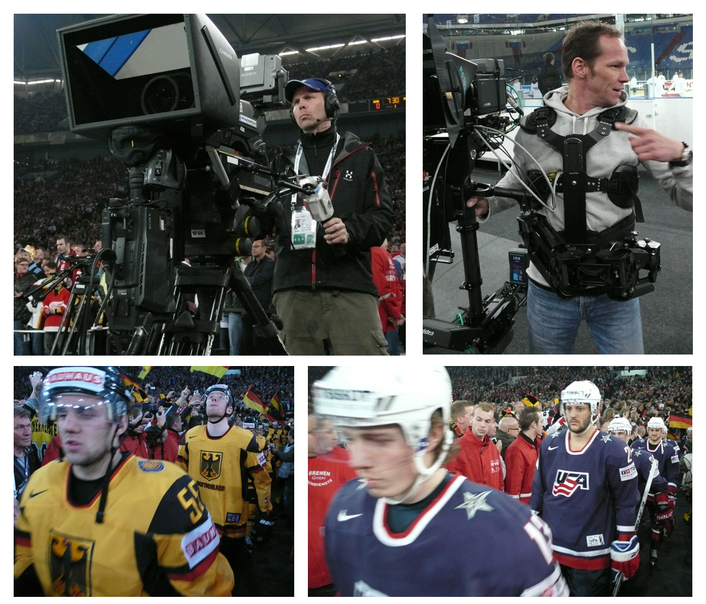 3D Cameras at the Ice Rink
Welcome to the future. The future is now. Gelsenkirchen has put on a show for the ages: A world record 77,803 fans came to watch Germany take on the U.S. at the opening game of the 2010 IIHF World Championship in Gelsenkirchen. Plazamedia produced the game for Constantin Sport Medien with the 3D specialists from TopVision. LIGA total! exclusively delivered the game live via its 50MB ready internet platform to their subscribers on channel 319 on the T-Home Media Receivers.

The IIHF opener follows the New York Rangers-New York Islanders game at Madison Square Garden in March as only the second hockey game ever to be broadcast to homes in 3D, but with one major difference: Plazamedia/TopVision was shooting in a soccer stadium. Veltins Arena, the home of Bundesliga football club Schalke 04 was converted into a hockey arena for the world record event.

Plazemedia together with TopVision has experience in shooting 3D at football stadiums, having produced the UEFA Champions League match between Vfb Stuttgart and FC Barcelona on 23rd February (the first 3D sports production in Germany), but ice hockey is a very different animal.

The Game was Covered with TopVision's HD Ü5

The 3D production was carried out with the HD Ü5 truck from TopVision featuring a Sony MVS-8000G switcher, EVS XT2 Live SloMo systems, Sony HDCAM and HDCAM SR VTRs and a Vizrt 3D HD Trio character Generator. The camera contols were upgraded with Sony's MPE-200. The MPE-200 processor works in conjunction with Sony's MPES-3D01 stereo-image processor software to digitally simulate the adjustments of the camera pairs. This allows stereographic engineers to easily manage multiple camera and rig parameters. True stereoscopic work requires two identical pairs of lenses, cameras and camera processing equipment. The cameras must match perfectly for color, and all imaging parameters must be matched between the two cameras. The MPE-200 processor reduces the error rate in live 3D production, leading to precisely aligned, high-quality 3D images. These perfectly aligned 3D images are giving the production director the creative freedom to edit the live 3D pictures in a similar way as he is used to edit a 2D live production. 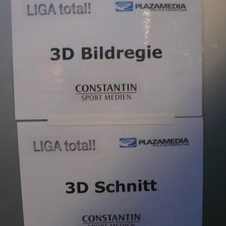 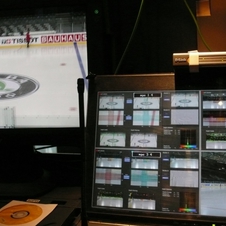 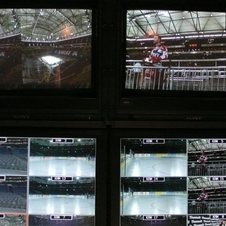 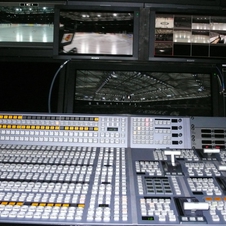 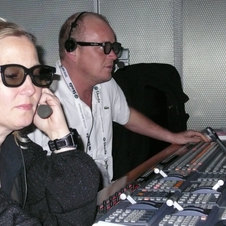 The game was covered with nine camera pairs. The lead camera was positioned high and consisted of two Sony HDC-1000 cameras with carefully aligned DigiSuper 86x HD lenses from Canon. At the left and right corner of the ice rink two HDC-1500’s were fitted on 3D standard rigs from P+S while the Steadicam was working with a P+S Freestyle rig carrying two Sony HDC-P1’s. The Polecam was in operation with two Toshiba IK-HD1H camera heads. The same camera pairs were installed behind the goals, next to the German substitutes and for the beauty shot, covering the whole arena and showing the 77.800 spectators in action around the ice rink.

Out of the nine camera pairs eight were placed on play ground level close to the rink. "The ice hockey game was quite different from our earlier football production because of the speed of the game," Robert Adams, director of OB productions for Plazamedia explained after the game and continued "We captured the action with the cameras and made the viewers feel as if they have been in the stadium. Congratulations to the whole team for delivering stunning 3D pictures of this great ice hockey game." - Oh, and by the way, Germany won the game, 2-1, in overtime no less! 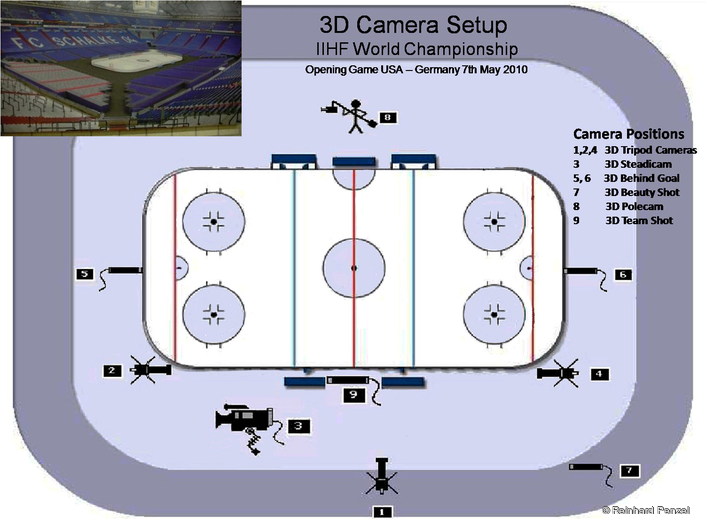 Schematic Drawing of the Ice Rink 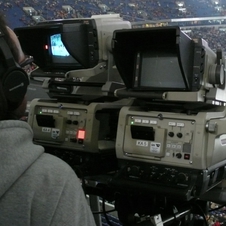 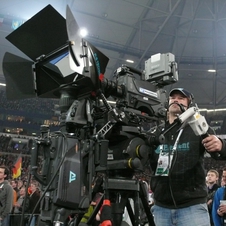 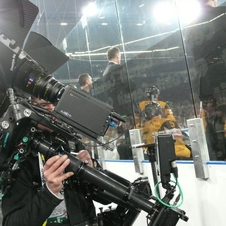 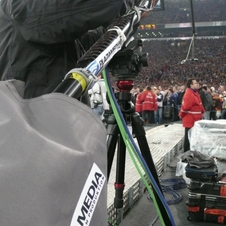 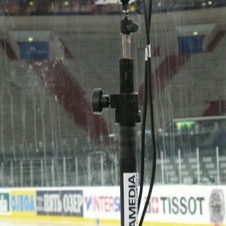 Plazamedia also handled the transmission for the event in conjunction with partner MTI. The game was transmitted along the HD TNTV fiber network and broadcast in 3D via Deutsche Telekom’s Entertain IPTV platform branded LIGA total! on channel 319.


Friday’s IIHF game was a new peak for 3D sports production in Europe, and Plazamedia is already looking toward the next one. According to Robert Adams, the company has conducted tests for handball and basketball and plans to produce tennis and golf in the “near future.” “The 3D tests we did caused the discussions to move beyond technical challenges and to open new creative space for the production directors,” he said. “In the long run, new concepts for the direction of 3D sports need to be developed.” 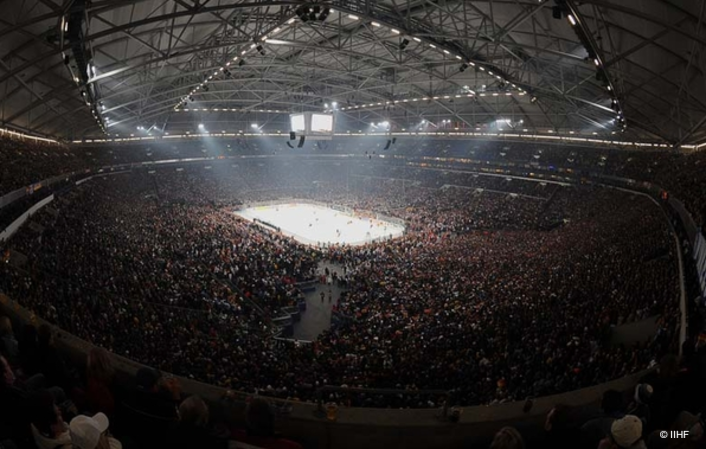 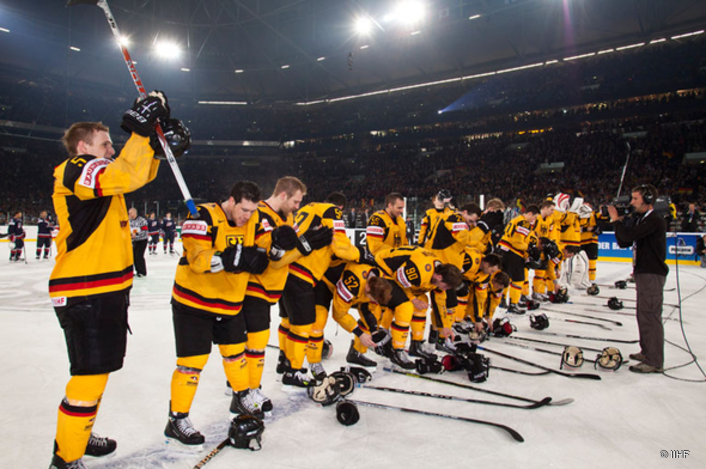 German players thank the crowd for their support