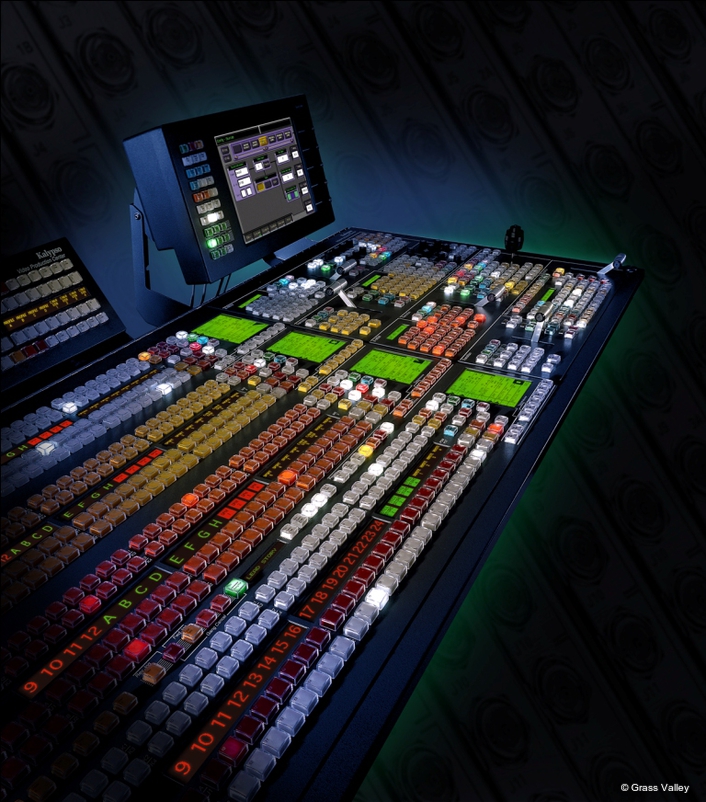 Kalypso
On Wednesday, March 24 a Grass Valley™ Kalypso™ high-definition Video Production Center was used by mobile production company Game Creek Video (based in Hudson, N.H.) to produce a live 3D multi-camera telecast of an NHL Hockey from New York’s Madison Square Garden (MSG). From there, and for the first time, the signal of the game between the New York Rangers and New York Islanders was distributed to Cablevision subscribers throughout the New York metropolitan area with 3D television sets in their homes.

Fans in the Theater at Madison Square Garden were also able to watch the production on a large 3D screen which was provided by RealD using its 3D stereoscopic Cinema Processing System. Several other 3D sporting events have been distributed to large screens in specially equipped theaters have been produced with Kalypso HD switchers in the past, but consumers couldn’t receive the signal. With the advent of the new generation of 3D-capable HD sets, and frame compatible 3D distribution, this long-time goal has become a technical reality.

The 90 input/48 output Grass Valley Kalypso HD switcher was operated on board Game Creek’s Yankee Clipper 53-foot HD production truck. This truck was linked to a second Game Creek “B” unit that housed all of the 3D processing equipment, supplied by 3D specialists 3Ality Digital (Burbank, Calif.). The company also provided its special camera rigs for the production.

The Kalypso HD is switchable between HD (1080i, 720p, and several 1080pSF formats) and SD (525-line and 625-line) formats, making it the perfect choice for production companies like Game Creek that work with a variety of clients with different SD and HD production needs.

The Kalypso HD includes a number of sophisticated technology advancements ideally suited to 3D production, such as Doubletake and bus linking.

Technicolor is a company listed on NYSE Euronext Paris and NYSE stock exchanges, and this press release may contain certain statements that constitute "forward-looking statements" within the meaning of the "safe harbor" of the U.S. Private Securities Litigation Reform Act of 1995. Such forward-looking statements are based on management's current expectations and beliefs and are subject to a number of risks, uncertainties, assumptions and other factors beyond Technicolor’s control that could cause actual results to differ materially from the future results expressed, forecasted or implied by such forward-looking statements due to changes in global economic and business conditions, risks related to its debt restructuring, and risks related to its operations in general. For a more complete list and description of such risks and uncertainties, refer to Technicolor’s Form 20-F (formerly Thomson) and other filings with the U.S. Securities and Exchange Commission and Technicolor’s Rapport Annuel and other filings with the French Autorité des marchés financiers.