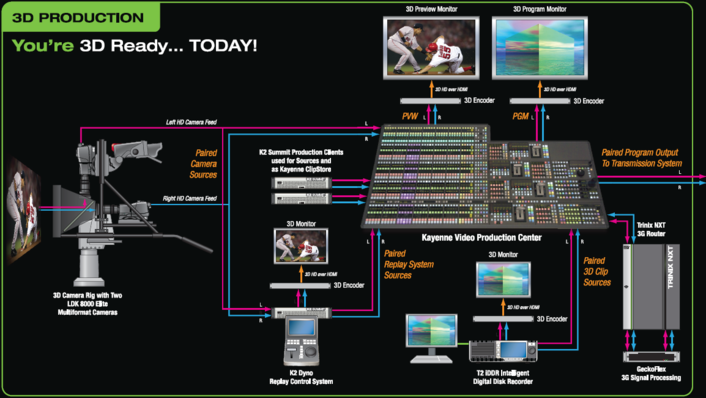 The Kalypso HD and Kayenne switchers both include such features as DoubleTake™, a split M/E mode that allows operators to partition primary and secondary M/E channels to synchronize images to produce true stereoscopic 3-D effects, and Buss Linking. Using these tools first introduced by Grass Valley in the Kalypso, live 3-D production is as straightforward as 2-D production. "The goal for most live 3D productions is to keep the production tools as easy to use as they are for a traditional live broadcast, without adding unnecessary extra costs," said Jeff Rosica, Senior Vice President of Grass Valley. "Both the Kalypso and Kayenne switchers are very capable of producing complex 3-D shows with minimal training today and, have already been used to produce some of the finest 3-D effects we've seen. With newer features yet to come from Grass Valley, we will make this process even easier as more projects are produced in 3D."

Doing a DoubleTake for 3-D

The Kalypso switcher features four keyers per M/E, so for true 3D production, the two additional background busses (Utility 1 and Utility 2) are used in addition to the A and B busses normally used for an M/E effect. This process is made even better on the new Kayenne switcher, that provides an additional half M/E and six keyers on each M/E buss. In this case more M/Es and more keyers mean more resources available for a mix effect and as much layering capability as a typical 2D production. This allows operators to perform a split M/E production for 3-D in which a primary feed and secondary feed are separated without occupying a separate M/E channel for each feed. On other switchers, this process often limits an operator using a four M/E switcher to have access to only two full mix/effects.

With a Grass Valley switcher, you have four full M/Es plus four shadow mix effects, which gives you the left-eye/right-eye feeds in parallel throughout the internal processing of the switcher. The secondary feed shadows the primary feed. This means there are no new production techniques to master, as the user operates the switcher as if they were handling a single feed. Another feature found on Grass Valley switchers is called Buss Linking, which when used in tandem with DoubleTake allows you to track or shadow the primary feed and keeps all of the 3D elements in perfect synchronization. With M/Es split and linked busses, left-eye and right-eye content is automatically switched in parallel, with all resources available. 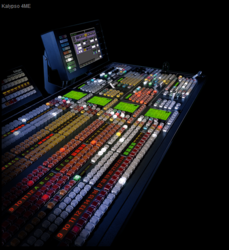 Depending upon the 3-D processing system in use, some of the 3-D productions being done don't need the DoubleTake feature and can be handled as a standard single feed, four M/E production. This was the case in December of 2008, when a live 3-D telecast of a National Football League (NFL) game from San Diego, Calif. was broadcast to theaters in Boston, Los Angeles, and New York using a Grass Valley Kalypso HD switcher on board a Cross Creek Television production truck (HDV8). The telecast was designed and captured by 3Ality Digital, a 3-D specialist in Burbank, Calif. In January, Fox Sports produced its Bowl Championship Series title game in 3-D broadcasting it to a number of movie theaters, as well as to the Consumer Electronics Show in Las Vegas. This production was also done with a Grass Valley Kalypso HD switcher on board the Freedom, a Game Creek Video production truck. In these single-feed 3D productions, freelance technical director Colby Bourgeois was able to use the internal Kalypso DVEs, available on every keyer, to adjust left-eye/right-eye elements to align the stereoscopic graphics elements. "The Kalypso's abundant resources handle these productions in stride" said Bourgeois.