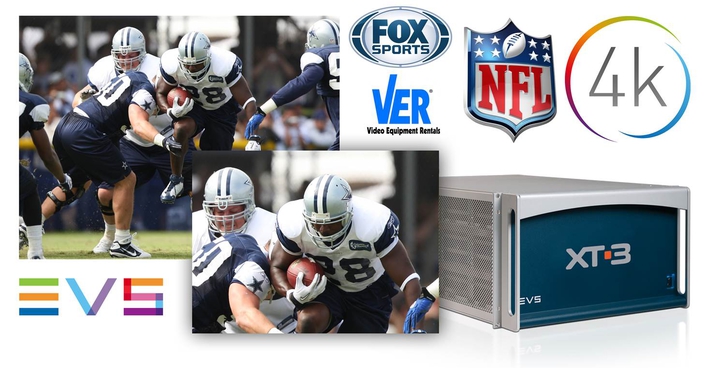 The system was supplied by Video Equipment Rentals (VER), which added the 4K capabilities to one of its existing EVS XT3 servers for a cost-effective upgrade to 4K.

“With EVS’ 4K server, we can take advantage of the higher resolution of 4K to give viewers clearer and highly detailed close-ups of the action,” said Jerry Steinberg, senior vice president, technical operations, FOX Sports. “We also used the 4K XT3 and Epsio Zoom for our recent coverage of the World Series. EVS systems always deliver the performance and reliability we need for our most-watched live sports programs.”

“FOX Sports is embracing the 4K revolution with its coverage of both the 2013 NFL season and the 2013 World Series,” said Frederic Garroy, SVP, The Americas, EVS. “It has demonstrated how 4K can be used to enrich live sports content by giving viewers an even higher quality, more immersive and up-close live viewing experience.”

The award-winning 4K XT3 server manages ingest and live replays of live 4K camera feeds. Existing XT3 customers are able to migrate to 4K with a nominal upgrade to their systems, and its identical user interface to the original XT3 requires no additional training for EVS operators. The 4K XT3 integrates with Epsio Zoom for 4K zooming, allowing customers to scale any 16:9 region within 4K frames to HD in real time.

“With dozens of EVS systems, including 55 XT3 servers, we know that EVS can deliver the speed and reliability that FOX Sports demands for the NFL,” said Howard Rosenthal, director of broadcast, VER. “The production team’s familiarity with the EVS environment, and the ability to simply upgrade one of our existing XT3s, made the 4K XT3 with EPSIO Zoom the obvious choice for FOX.”