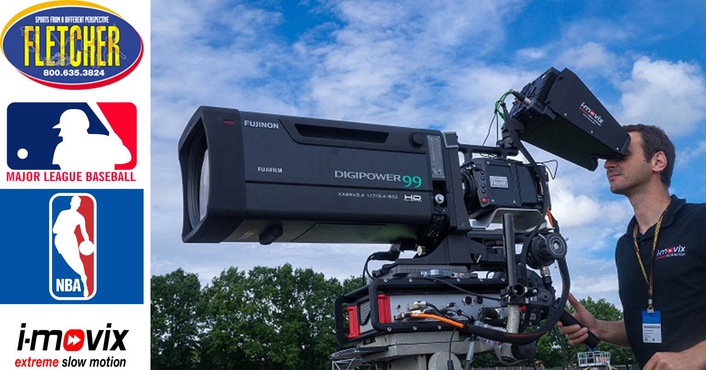 MLB and NBA with I-MOVIX X10 UHD
Chicago-based sports production specialists Fletcher Sports has completed the first season of major league baseball and NBA coverage using the I-MOVIX X10 technology and plan to use its new fleet of X10 UHD systems over the next season to come.

“With  continuous recording in 1080p at up to 600fps, replays really look a lot better than anything you can get with the standard 60fps system, where there's a lot of motion blur,” said Dan Grainge, VP of Fletcher Sports Chicago. “You can tell if a player's over the line, whether he has possession of the ball and so on. Before using the X10 UHD, it was difficult to do that because you didn’t have all the frames to play with. But now you can slow down any action, reducing motion blur to zero.”

While its broadcast customers particularly like zoom and the X10 UHD’s continuous recording capability as an enhancement for broadcasts in 1080p, Fletcher Sports is also scheduled to contribute to the pioneering 4K public broadcasts of major sporting events planned over the next few months.

For very high-frame rate ultra-slow motion in 4K sports coverage, the system operates in USM mode to deliver instant replays of up to 1,000fps. For continuous non-stop recording, SSM mode delivers up to 120fps at 4Kp60. When operating in HD resolutions (1080p or 1080i) X10 UHD offers up to 600fps in continuous SSM mode, and up to 2,000fps in USM mode. The system can also complement these specialized applications by performing in a conventional live camera role.

X10 UHD’s frames-per-second performance and operational flexibility in a variety of production situations far outstrip the capabilities of other systems on the market today.

X10 UHD delivers all the usability and image quality benefits for which I-MOVIX systems have become renowned. Fully integrated for live broadcast production and easy to operate by any broadcast camera crew, X10 UHD will be specified in an RF version. Optimized for quick setup and efficient operation in exacting production situations, X10 UHD is the most advanced solution with 4K and HD ultra-slow and continuous super-slow motion capabilities available for multi-role shooting.