Comprehensive Support for the First Olympic Games to be Broadcast in 3D
Panasonic Corporation announced that it has reached an agreement with Olympic Broadcasting Services (OBS), the host broadcaster of the XXXth Olympiad, which begin on July 27, 2012, in London, UK, on the use of its AG-3DP1 and AG-3DA1 professional integrated twin-lens 3D camera recorders for 3D broadcasts of the event.

As the Official Worldwide Olympic Partner of the London 2012 Olympic Games, Panasonic will provide comprehensive support for first 3D broadcast of the Games, enabling viewers to experience the full excitement in their living rooms with a new level of immediacy. The partnership will produce the first HD 3D live broadcast in Olympic history, and will allow audiences around the globe to witness the world’s greatest sporting event in immersive 3D. 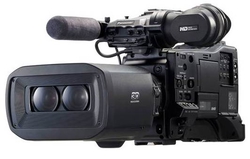 The 3D broadcast will include major events such as the Opening and Closing Ceremonies, athletics, gymnastics, diving and swimming, and will be produced and delivered to participating rights-holding broadcasters around the world.  OBS will be in charge of producing more than 200 hours of 3D coverage during the London 2012 Olympic Games by utilising Panasonic’s state-of-art 3D production technologies including the AG-3DP1, a P2HD professional fully-integrated twin-lens Full-HD 3D camera recorder.

Continuing a tradition that began with the Barcelona Olympic Games in 1992, the London Olympic Games will be the 10th Olympic Games for which Panasonic’s professional audio and video equipment technology has supported the broadcasting of the Olympic Games. At International Broadcast Centre (IBC) in Olympic Park in London in July 2012, all international images will be produced and distributed in HD format (1080/50i). And the participating rights-holding broadcasters who are planning to broadcast in 3D will be supported by Panasonic 3D technologies and equipment to distribute high-quality Full-HD 3D image. The world audience will be able to enjoy the Olympics Games, the world’s largest sporting event with 640 sessions in 300 categories in 26 events over 19 days, with a new level of immediacy made possible by the superior picture and sound quality.

“The use of Panasonic integrated twin-lens 3D camera recorders at the London 2012 Olympic Games, the first to be broadcast in 3D, will enable us to contribute to bringing a new level of immediacy to viewers throughout the world through high-quality Full-HD 3D image. New AG-3DP1 is the first P2HD based Full-HD 3D camera recorder and P2HD’s ruggedness has been proved during the past Olympic Games. P2HD file based workflow has been accepted very well by many broadcasters and it will support quickly and steadily broadcasting at the London Olympic Games, too.” said Kunihiko Miyagi, Director of the Professional AV Business Unit of the Business Solutions Business Group at AVC Networks Company, which handles the development of broadcast equipment for Panasonic.

“For the past two decades, Panasonic has been a valued partner of the Olympic Movement and of the Host Broadcasting organisation,” said Manolo Romero, Managing Director of OBS. “We are now proud to announce this partnership to realise the first ever live 3D Olympic Games, and we are confident that this unprecedented broadcast will be a great success in no small part due to the 3D technologies provided by Panasonic. Ultimately, we believe this production of the first live 3D Olympic Games will make the London 2012 Olympic Games one of the most significant in the history of broadcasting technology.”

The Olympic Games has always been a pioneer in the development of TV broadcasting technologies, and has been on the cusp of innovation since the first live over-the-air broadcast was introduced in London 1948.  Panasonic has been proud to support the Olympic Host Broadcaster since the first digital broadcast in Barcelona 1992, right through to the first HD broadcast in Beijing 2008. Now we are proud to announce the partnership with the IOC and OBS to create another successful era in Olympic broadcasting with the first live 3D Olympic Games at London 2012. There is no doubt that the Olympic Games will provide some of the best content for the 3D market in the future, and that 3D TV will drastically change the way we experience this great sporting event in our living rooms,” said Takumi Kajisha, Managing Executive Officer of Panasonic.