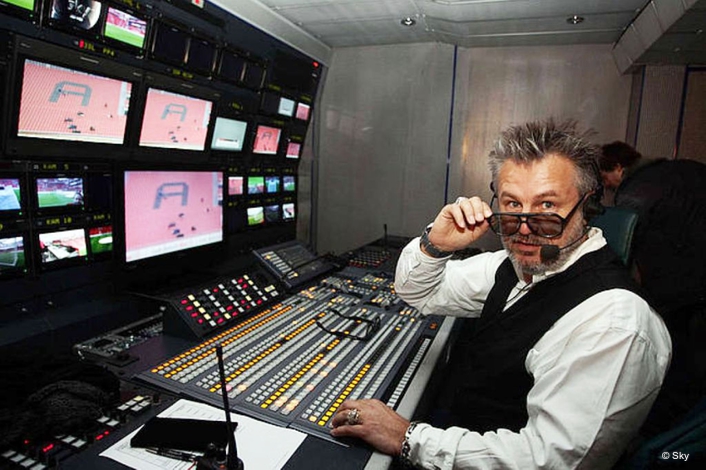 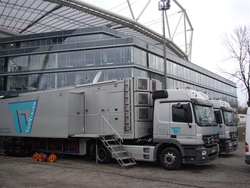 On 14th March 2010 Sky Germany has shown the Bundesliga top-game between Leverkusen and Hamburg to a selected audience in 3D HD. After the first successful 3D HD trials at the Champions League Game Stuttgart – Barcelona on 23rd February the production on 14tn March again was carried out by TopVision. The 3D HD signal was produced with nine 3D HD camera pairs. Only the camera pair one was positioned high, all other camera pairs were positioned at play ground level and have delivered stunning pictures of the actions between the teams of Bayer Leverkusen and Hamburger SV. 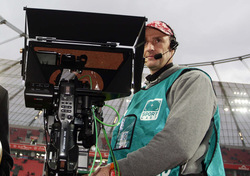 TopVision was using 3D HD camera rigs from P+S Technik (standard ones for the tripod mounting of three HDC-1500 pairs and freestyle ones mounted on Steadicams for the two EX3 pairs) and the SwissRig from Imartis AG for tripod mounting of one HDC-1500 camera pair. The HDC-1000 camera pair (camera position one) weas mounted on a rig created by TopVision. Engineered and manufactured to very high specifications, the tripod mounted rigs from P+S Technik provided proper parallel camera offsetting for screen perfect stereo images at distances from macro to faraway. The rigs were simple to use and the setup time for a rig took as little as 5 minutes. Designed for constant equilibration, the P+S freestyle rig always kept the camera weights in perfect balance. Integrated motors for stereo base and angulations adjustment optimized the weight and were compatible with available wireless remote control systems. The cameras on the Steadicam were EX3 cameras which carefully were matched to the HDC-1500 cameras. A pair of HDC-1000 cameras with 25x Canon lenses did the job on position one and was the only camera positioned high. Four HDC-1500 pairs were operated at play ground level and were shooting with 11x and 22x Canon lenses. Canon supported the 3D HD production by delivering specially selected lenses. The 3D HD SloMo playback was carried out via EVS XT² servers. Finally the two 3D HD goal cameras were built with HD 1100 remote camera pairs from LuxMediaPlan. The 2/3 inch, 2,1 megapixel high end CMOS sensors guaranteed a progressive resolution of up to 1080p/60fsp and the remote control panel offered full studio control functions. In addition a 3D HD camera from Astro (SHVC-03SG) was positioned next to the commentator place to cover the opening statement of Kai Dittmann who was presenting the game by using 3D glasses sitting in front of a carefully aligned Sony 3G capable LMD-2451TD 3D monitor (24“ Full HD Monitor with 1920x1200 pixels, ChromaTRU and 10bit Processing). 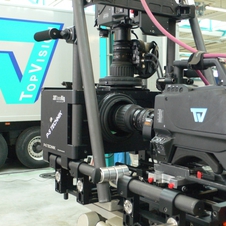 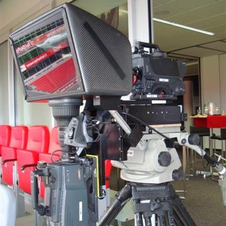 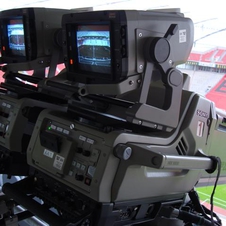 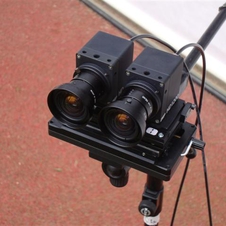 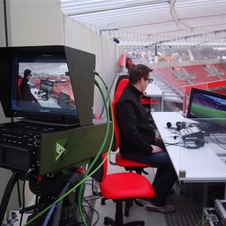 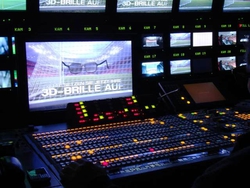 To greatly simplify the 3D HD shooting workflow, a Sony MPE-200 multi-image processor with MPES-3D01 stereo image processor software was on location. The combination of the MPE-200 with MPES-3D01 software enabled the production crew to analyze the 3D HD images and make fine adjustments, e.g. 50% mix, above/below, anaglyph, difference, and side-by-side comparison were provided. The mixing of the 3D HD camera signals was carried out on the MVS-8000G production switcher. The installation of a 3D HD software update enabled the switcher to handle 3D HD signals easily without complex link settings. Cross point assignment for the right and the left eye signals were set as a pair of signals, however the parallax value of the signals could be adjusted independently. For the 3D HD graphics a VizRT 3D HD Engine character generator with software V3.2 was operated by TopVision. On the output of the switcher the right eye and the left eye images were streamed in full HD 1920 x 1080 to a 3D HD monitor from Hyundai which was temporally installed in front of the production mixer in TopVison’s HD OBVan Ü4. The Hyundai monitor incorporates a micro-polarizer screen attached to the LCD panel and was supplied with passive glasses. Thanks to these lightweight circular polarizer 3D system glasses, production director Volker Weicker could do the live edit of the 3D HD images with less stress. The 3D HD signal was distributed to a suite at the stadium in Leverkusen where various people had the chance to get an impression of the 3D HD pictures first hand, again on an Hyundai 3D HD display. The responsibility for the satellite transmission was with HD Sat Communications, providing an uplink van in Leverkusen and a downlink van in Munich to show the 3D HD signal of the game to about 120 VIPs invited by Sky to the “Füllhorn Halle”.

The presentation and the viewing experience 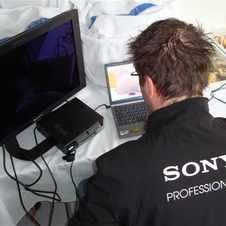 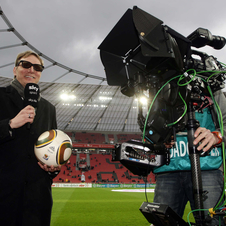 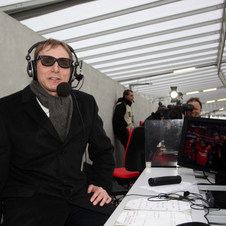 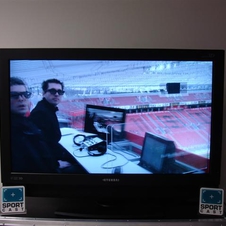 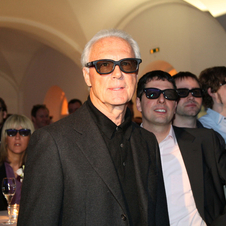 A Statement from Achim Jendges

After the successful production and transmission Achim Jendges, Managing Director of TopVision stated: „The future of HD is 3D. We learned a lot and we have now a clear vision of how to get prepared for the next 3D productions. We will definitely go forward in investing and developing all the necessary customized LIVE Sport 3D cameras and broadcast equipment with all our 3D partners. The 3D HD show must go on! It is the best thing I ever have seen since television got colored!

A 3:30min Video on 3D HD production (in German language) can be found on the following link.