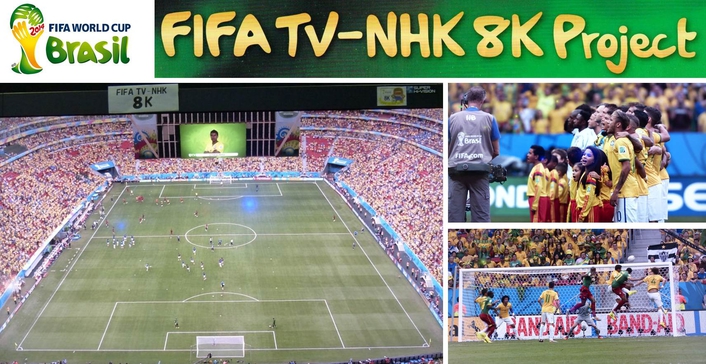 8K Display at the IBC at Riocentro
FIFA TV has a proud legacy of pioneering new television technology at FIFA tournaments to ensure that football fans around the world can enjoy the best quality sports coverage on offer.

The 2014 FIFA World Cup Brazil is no different with the very latest in visual technology either being used in the broadcast production of key matches and events or being tested for use in future competitions. 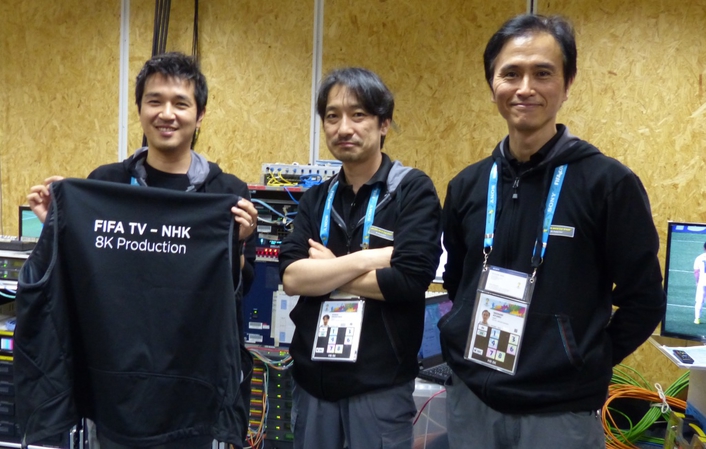 FIFA TV NHK 8K Production: Masataka Kawai and his team at the IBC

While many of the world’s broadcasters are still looking for the next stage of TV standard, NHK is making a huge show in Brazil of its ultimate plan, which is to see 8K Super Hi-Vision start broadcasting in 2020. 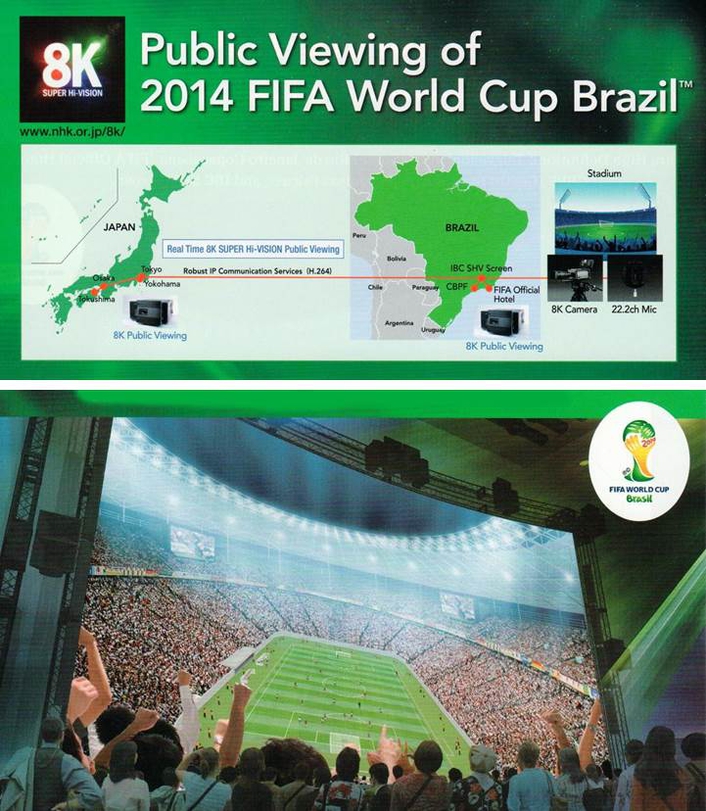 In addition to the presentation at the three viewing sites in Brazil NHK is beaming the nine FIFA World Cup matches in 8K back to. NHK is travelling with its SHC-01 8K OBVan from Receife (Coast of Ivory – Japan), to Natal (Ghana – USA and Japan - Greece), to Brasilia (Cameron – Brazil) to Belo Horizonte (Chile – Brazil) back to Brasilia (France – Nigeria and one Quarter Final) further on again to Belo Horizonte for one Half Final and finally to Rio de Janeiro for the 2014 FIFA World Cup Final.  These nine matches were and will be shown in Japan in Tokyo, Yokohama, Osaka and Tokushima on giant screens. 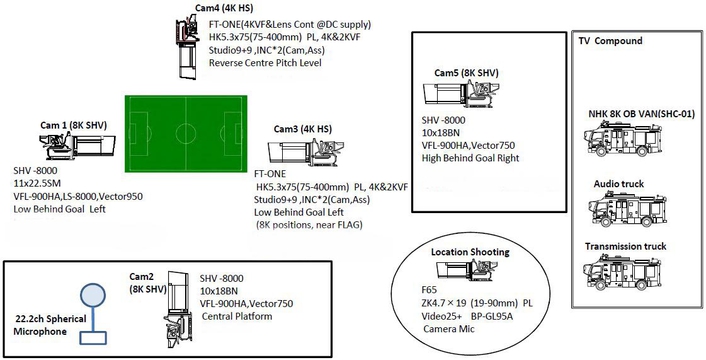 The 8K camera plan for the nine matches

The signal of the nine matches is generated by three Ikegami SHV-8000 8K cameras, two FOR.A FT-ONE high speed cameras (up converted from 4K to 8K) and one Sony F-65 camera for location shooting. The signals of the FT-ONEs are recorded on EVS XT3 Servers and plyed back in SlowMotion via the LSM Operator interface. The 8K OBVan is travelling together with an audio truck for the recording of 22.2 surround sound on a Lawo mc²66 MKII console, a transmission truck and an equipment truck. The Brazilian tour of the four trucks is more than 4,200km long. 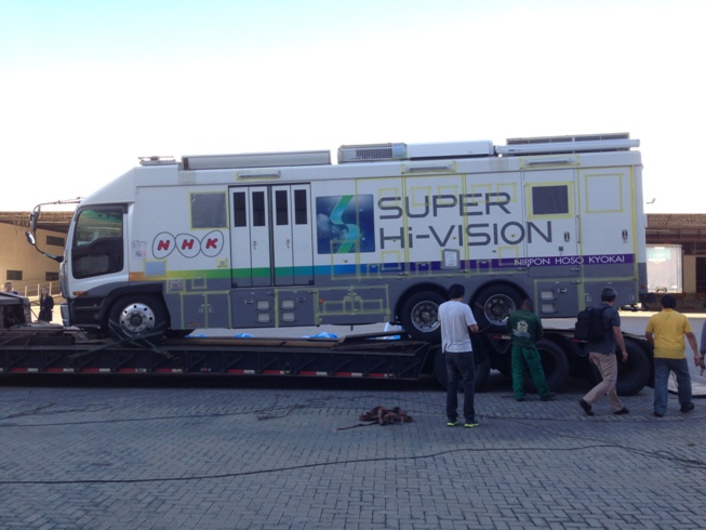 The NHK 8K OBVan on its journey across Brazil 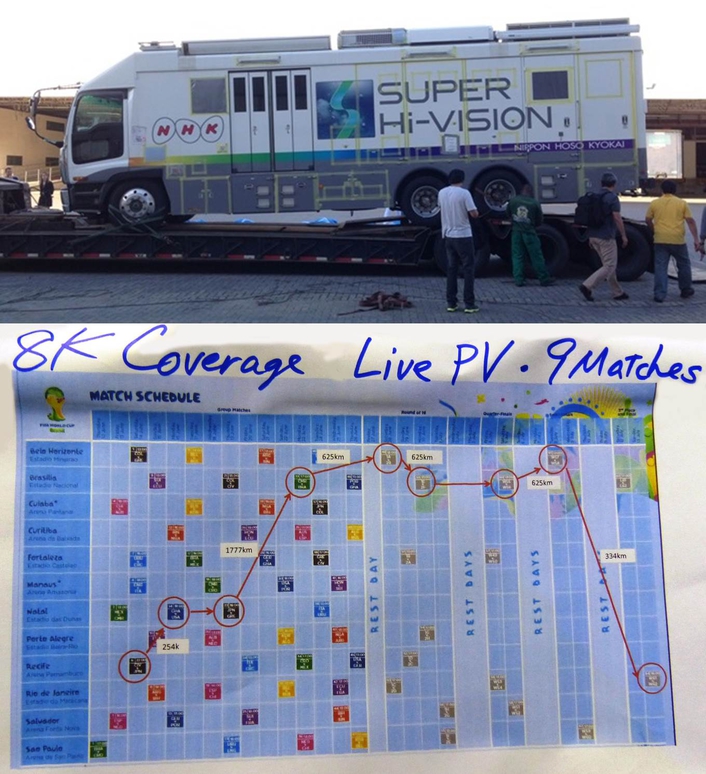 The NHK 8K OBVan on its journey in Brazil

The signals from the nine matches are transmitted to Tokyo via CBPF for Public Viewing.They are also down-converted to 4K at the IBC in order for FIFA TV-SONY 4K Production.

Director of FIFA TV Niclas Ericson said: “With ultra HD technology, such as 4K and 8K, we are exploring imagery that is truly at the cutting edge of TV production. We are proud to be able to innovate in this way to improve the viewing experience for football fans around the world. The new technologies also include ground breaking standards in sound quality, bringing the viewer almost ‘into the stadium’.” 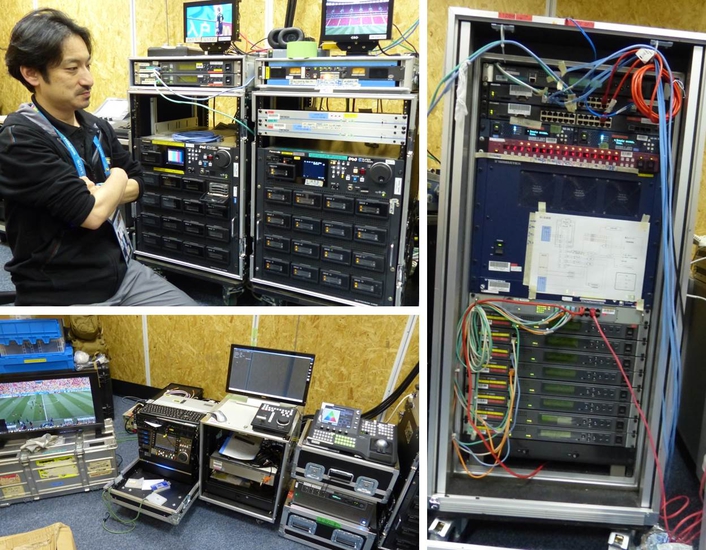 Japan is concentrating on Brazil, not just because of the soccer, but because the nation is a user of the Japanese-developed digital terrestrial broadcasting system, ISDB, and is consequently seen as a prime candidate for adopting the advanced technology. Brazil’s 2016 hosting of the Olympic Games will provide another test-bed for trialing the systems. 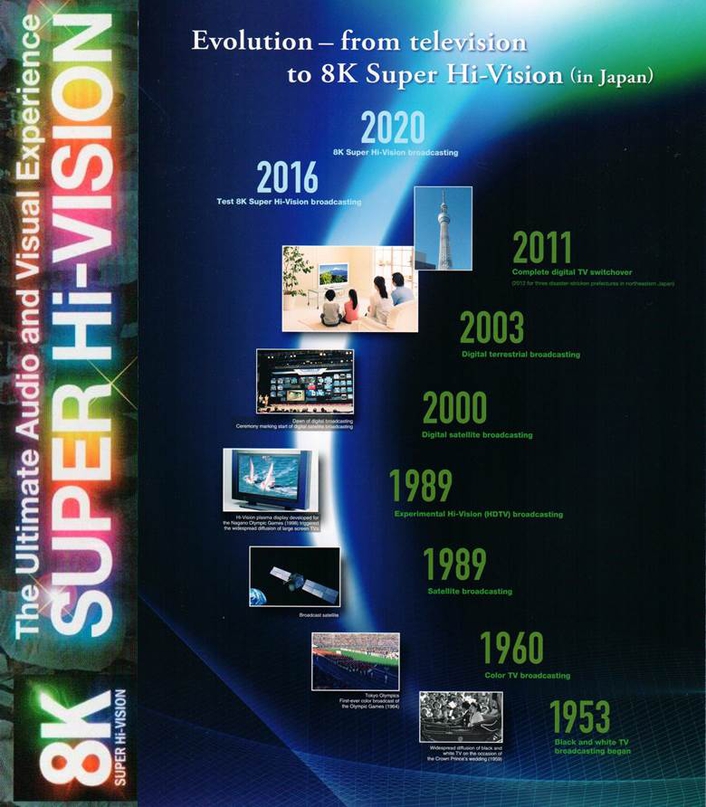