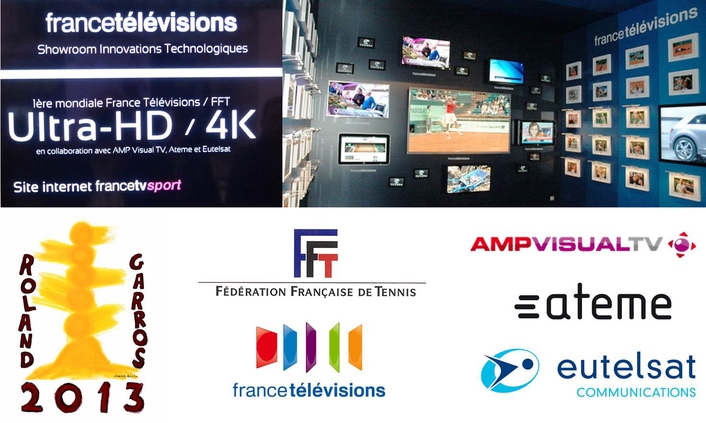 World Premiere of New Technology at Roland-Garros 2013 Tennis Tournament
The French Tennis Federation (FFT) and France Télévisions, the official broadcaster and executive producer of the Roland-Garros Tennis Tournament, are pleased to jointly inaugurate the new “Ultra High Definition” television format during this 2013 edition of the French open.

Ultra High Definition
In its 26th year as official Roland Garros broadcaster, France Télévisions has chosen to join forces with the French Tennis Federation and invite tournament visitors to discover a myriad of digital innovations from today and tomorrow. This gives spectators a fantastic opportunity to get a preview of the breathtaking image quality of Ultra High Definition.

This new format, also called ’4K’, delivers an image four times superior to the current high definition TV. As was the case seven years ago for High Definition, it is again at Roland-Garros that this “world first” will take place during the second week of the tournament, with the live multi-camera capture of the competition on the Philippe Chatrier court.

This innovation, a major step for live television production, will be visible in a showroom of France Télévisions, located on the ground floor of the Philippe Chatrier court in the RG LAB. RG LAB visitors will be able to experience the quality of 4K images in either live viewing or replay. Experts will be available on site to answer questions from the public about this new technology.

Always committed to innovation, the FFT and France Télévisions are very proud to be once again presenting the latest technological developments in television on the occasion of the Roland-Garros tournament. For this project, the FFT and France Télévisions have joined forces with AMP VISUAL TV for image capture, ATEME for the digital compression of the signal and EUTELSAT for satellite broadcasting.

About the French Tennis Federation
With over 1.1 million federation members, tennis is by far France’s most practised individual sport, and the French Tennis Federation has the second highest number of members out of all of the country’s federations. Founded in 1920, the FFT is recognised as promoting public interest. This “association loi 1901” (non-profit, voluntary association) has been given the mission of promoting, organising and developing tennis in France.
The French Tennis Federation is the only sports federation in France to organise a global-scale event every year: the Roland-Garros tournament, one of the four Grand Slams. The FFT has: 1.1 million members; 5 million players; 8,500 clubs in France; 400,000 competitors, 2 million official matches and 100,000 voluntary directors.

About France Télévisions
France Télévisions is France’s number one audiovisual group with five national channels (France 2, France 3, France 4, France 5 and France Ô), plus a strong regional and overseas network. As the core French TV offering, it captures more than one-third of the audience in France. Boasting a range of complementary, distinctive channels, the group offers a diverse range of programming, allowing viewers to choose from satellite, DTT, ADSL, Internet, mobile phones, tablets, smart TV, etc. In this fast-changing environment, the number of different media is constantly increasing together with different types of usage. France Télévisions anticipates and adapts to new technologies in order to better satisfy viewers’ expectations and needs. 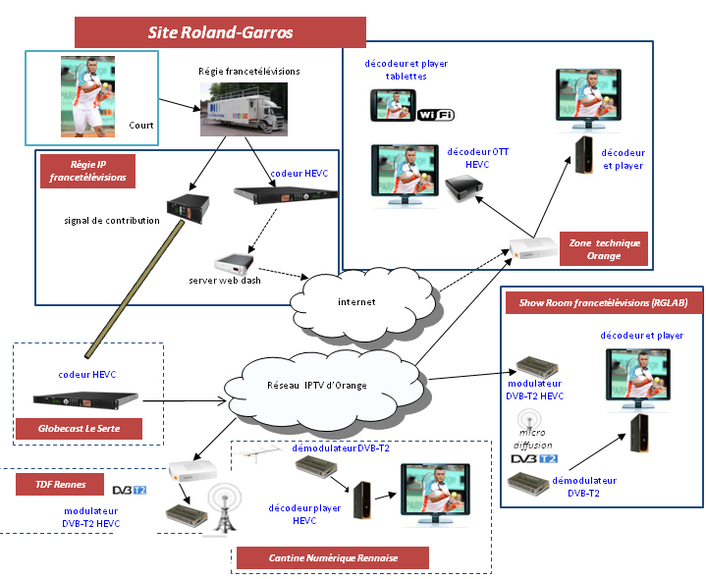 About AMP Visual TV
AMP VISUAL TV provides technical services for TV filming in outside locations (video-mobile resources) or in studios. As a specialist in High Definition filming, RF broadcasting and 3D filming, the Group is acknowledged for its expertise in the fields of sports, live shows, reports, special operations as well as variety, games or entertainment shows. With 20 studios, 22 Outside Broadcast vans – one of the largest fleets in Europe – and 6 “flight case” studios, AMP Visual TV’s more than 400 employees produced 14,500 hours of content last year.

About Eutelsat Communications
With capacity commercialised on 31 satellites delivering reach of Europe, the Middle East, Africa, Asia, significant parts of the Americas and the Asia-Pacific, Eutelsat Communications is one of the world’s leading satellite operators. As of 31 March 2013, Eutelsat’s satellites were broadcasting more than 4,600 television channels to over 200 million cable and satellite homes in Europe, the Middle East and Africa. The Group’s satellites also provide a wide range of services for TV contribution, corporate networks and fixed and mobile broadband markets. Headquartered in Paris, Eutelsat and its subsidiaries employ over 780 commercial, technical and operational professionals from 30 countries.