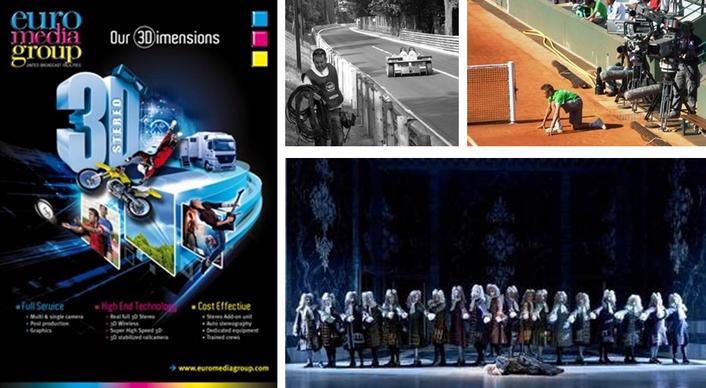 Dimension 3 - Opéra Comique - French Open - 70th Pau Grand Prix
After being one of the firsts to develop HD recording and broadcasting, Euro Media France  now offers broadcasting in 3D of the most important artistic, cultural and sporting events. The wide-ranging experience of the group in terms of multi- and single camera recording have allowed it to develop universally acknowledged expertise in the field of 3D broadcasting.

Euro Media Group was exhibiting from 24 to 26 May at the International 3D Forum : Dimension3 It was an opportunity for Euro Media Group to display its expertise in 3D and to present its forthcoming 3D projects (to come in particular is the marriage of Prince Albert of Monaco in 3D).The Forum was held at the Pullman & Haussmann Docks in Plaine Saint-Denis.

Atys at the Opéra Comique

The 9 Sony HDC-1500 cameras with Hypergamma (to provide in particular more natural colour reproduction, greater dynamic range and more rapid adjustments) included 6 heavy cameras, 2 light cameras (including one on a Polyscope) and 1 camera with wide angle.

On Thursday 19th May, Euro Media France filmed the opera using 11 HDCAM video recorders, and on Saturday 21st May we held an additional performance for the live showing at 19:30 on Mezzo, the TV channel dedicated to music.Some more information about Atys – this opera in five acts, created at the court of Louis XIV and nicknamed “the King’s opera” - was the first French tragedy to allow its hero to die on stage.This production is a recreation of the event shown in France in 1987; the production is by Jean-Marie Villégier and the musical direction by William Christie.

Euro Media France was at the Roland Garros tennis tournament from 23rd to 26th May to broadcast from courts 3 and 6 in OB truck XXL2, whose capacity allowed a double production.EMF also provided a team of technicians for the France Television visuals, and the inescapable HF camera which followed Daniel Lauclair every day.

The 70th Pau Grand Prix took place this weekend with three days of races. Like the 20,000 spectators who came to cheer on the drivers, Euro Media France made the trip with OB truck XL4 and 16 cameras. To complete this equipment installed on behalf of Peter Auto were 4 mounted HF cameras (which required the installation of an AVID room and accommodation for the WEB TV) and 5 LSMs. This Grand Prix, directed by Antoine Ghérardt, was broadcast on Motors TV.