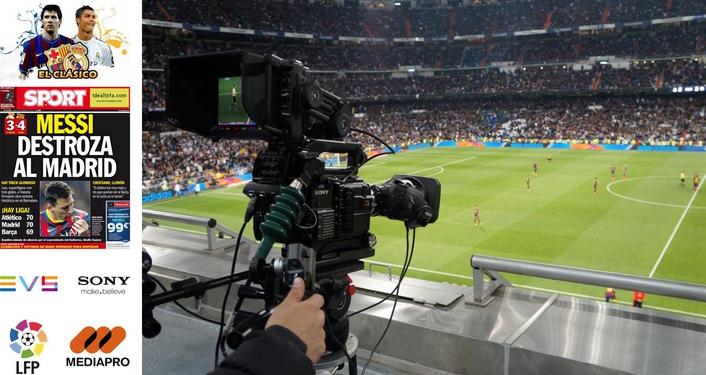 Arguably the world's greatest rivalry, Real Madrid vs. Barcelona didn't even come close to disappointing—at least if you're a neutral fan—at the Bernabeu on Sunday night. The visitors eventually escaped with an epic 4-3 victory on the back of a Lionel Messi hat-trick, climbing to within one point of both Atletico Madrid and Real Madrid atop the La Liga table.

Unfortunately, for as breathless and scintillating as the always-legendary match turned out to be, it was draped in just as much controversy. Referee Alberto Undiano Mallenco sent off Sergio Ramos in the 63rd minute and handed out three penalties, including two in the final half-hour that helped Barcelona erase a 3-2 deficit.

Mediapro produced El Clásico with 4K technology. The equipment consisted of two Sony PMW-F55 cameras, with footage monitored on two PVM-X300 displays. This equipment together with EVS XT3 servers offered SuperZoom capability and the shooting of some highly detailed sequences of the match. Currently MediaPro is producing the match's highlights in 4K for its customers and will upload the best moments to YouTube.

Spain's La Liga has chosen a match with a worldwide audience to present its new 4K project. El Clásico, between two of the best football teams in the world and the always-special rivalry between Cristiano Ronaldo and Lionel Messi, is followed all around the world and broadcast by the main international networks. From Fox Australia to DirecTV and ESPN for the Americas, the match will be also broadcast by Canal+ (including Africa), beIN Sports, Sky Sports, CCTV 5 in China and Wowow in Japan, among many others.

“The introduction of this new standard of resolution underscores Mediapro’s commitment to spearhead developments in digital television and to offer viewers the utmost in picture resolution. This step represents a global project by Mediapro designed to bolster broadcast quality which will be formalised in the Spanish BBVA Liga next season”, said the company in a statement.

The recording of El Clásico in 4K at the Santiago Bernabeu Stadium in Madrid is the first step of Spain’s LFP (Liga de Fútbol Profesional) to become the first football league in the world to regularly broadcast in Ultra HD with the start of the 2014/2015 season.

The Barcelona-Madrid trial follows Sony’s tests of 4K during the Confederations Cup in Brazil last year and ahead of its returning to Brazil during the summer for the World Cup, where the final match will be shot in the 4K format.