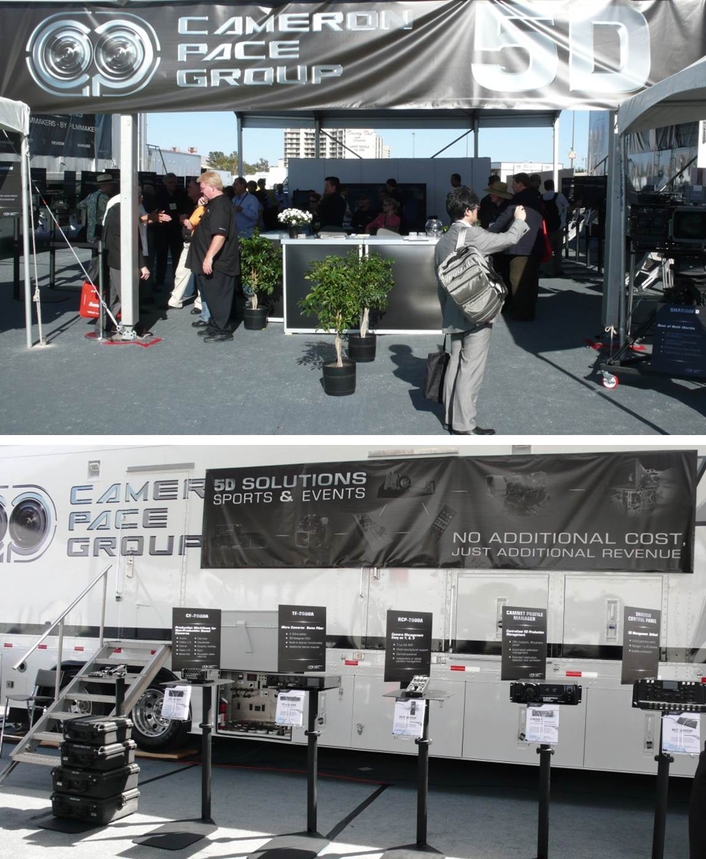 The CPG Booth at NAB 2012
CAMERON PACE Group (CPG) unveiled its latest solutions to make 3D profitable for broadcasters and filmmakers. ShadowCam, FrameLinking, Smart Rigs, and ShadowVision are all proven technology products where the need for additional personnel is significantly reduced. As a solution provider, CPG creates integrated products that work seamlessly with the 2D production.

Led by co-founders James Cameron and Vince Pace, CPG is creating a methodology for world-class 3D by developing products, solutions, and creative tools for use across all media channels. Supporting networks, studios, broadcasters, filmmakers, and creative teams globally, the company’s unparalleled expertise helps content producers realize the full potential of 3D as a powerful and immersive storytelling medium.

At CPG's NAB booth "Zero Delta" was the term of the show. But the zero delta, or the point at which producing a 3D telecast adds no additional cost or disrupts none of the traditional workflows in the 2D production, is not just a hollow marketing term. CPG Co-Chairman Vince Pace believes it is a true possibility and is essential to the maturation of the 3D-production business.

“The zero delta reaches two areas: the financial and the workflow impact,” Pace said. “If we are changing the way you do business as producer, director, or cameraman, then it’s not zero delta even if it’s free. For me, zero delta means we have no impact on your traditional production approaches and no gain in your cost. And you’re truly seeing solutions from us going in that direction.” 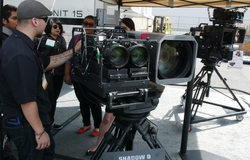 The solutions the Cameron Pace Group employees at the booth were explaining fit into the 5D production model used by ESPN 3D, in which a single truck housing a single crew produces both the 2D and 3D shows. Each camera position deploys one of three techniques: a Shadow D rig (incorporating a 3D rig and a 2D camera), the 2D show taking the left-eye feed, or a 2D camera slightly offset to create the illusion of a 3D image.

The company’s Emmy Award-winning Shadow technology enables 5D productions at about the cost of traditional 2D productions. Critically, there are no disruptions from standard production methods–no new camera crew or added camera positions. Broadcasters capture their events the way they always have–but now in 2D and 3D at the same time, thanks to CPG’s patented technology.

The CPG Shadow Caster
Long known for its 3D camera rigs, production gear, and Shadow 3D B units, CPG was making waves this year with the introduction of two Shadow Caster mobile-production units. Although many mobile-production vendors view these trucks as potential competition in the 3D market, Pace asserts that they create new business opportunities for the entire industry. 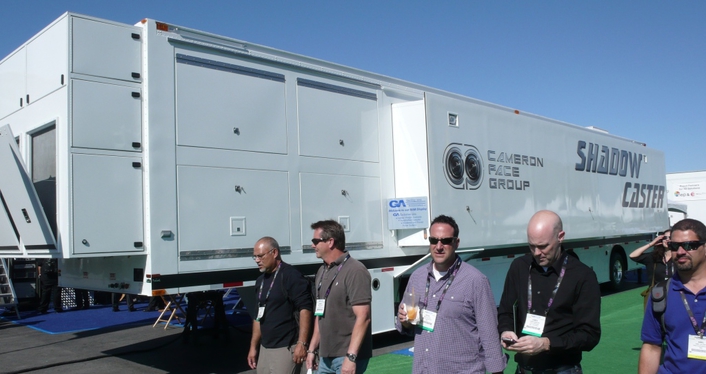 Both ShadowCaster 1 and the yet-to-be-built-out trailer for ShadowCaster 2 were on display at the NAB Show . Built by Gerling & Associates, the 53-ft. double-expando features a large, two-bench audio area geared toward the live concert work CPG hopes to attract with the new truck. With full areas for production, replay, and audio, ShadowCaster can function as a standalone mobile-production unit.

“Coming out of the gate for us, we are trying to show that this is the best methodology for 3D production,” says Pace. “Once that gets traction, I have every intention of selling or leasing that methodology to any mobile-unit provider that has a current relationship with a customer.

CPG expects the ShadowCaster units to get regular work in both the sports and entertainment fields. The company is coming off a groundbreaking 32-camera production at the Masters golf tournament (which was not a true 5D production and had separate 2D and 3D trucks) and will gear up even further for one of its favorite events of the year: ESPN’s Summer X Games.

“Winter X Games in January was a huge leap ahead in terms of 5D, and we will definitely continue that at Summer X,” Pace explaines. “We are no longer constrained by this ‘less is more’ philosophy. It is now a matter of ‘what do we need to get the job done.’ At X Games, it will be all about ‘make it more and make it easier,’ meaning get more 3D camera angles and make those angles easier to get.”