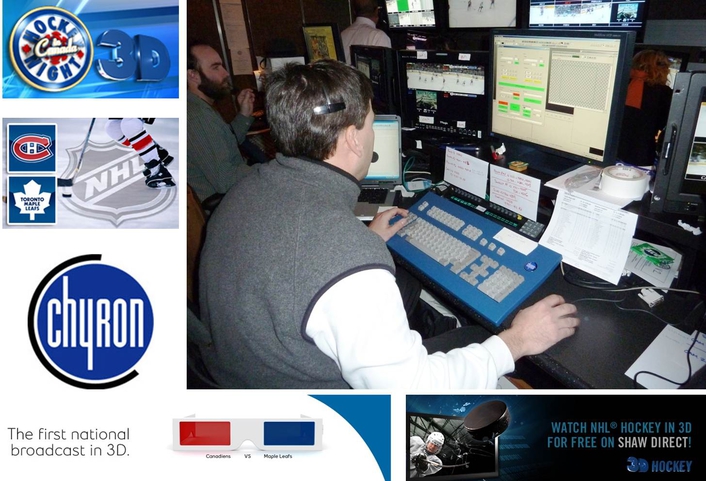 HyperX3 Adds Graphical Flare to Landmark 3D Broadcast of Canadiens vs Maple Leafs
Chyron today announced that two HyperX3 on-air graphics systems were used in Canada's first 3D hockey broadcast, a matchup between longtime rivals, the Montreal Canadiens and the Toronto Maple Leafs, on CBC's Hockey Night in Canada. During the Dec. 11th game at Toronto's Air Canada Centre, the Chyron systems allowed for use of a dynamic 3D score bug and other graphics with 3D objects and animation in this landmark broadcast.

"CBC's Hockey Night in Canada has led hockey coverage in Canada for close to six decades," said Trevor Pilling, executive producer of CBC's Hockey Night in Canada. "We were the first to introduce hockey in HD in 2003, and we've continued that spirit of innovation with Canada's first 3D hockey broadcast. Working with Chyron systems, we were able to package our hockey graphics for the 3D environment and successfully integrate them into our broadcast workflow to provide a visually striking 3D viewing experience."

Chyron's flagship on-air graphics system, HyperX3, features seamless creation-to-playout capability, real-time 2D/3D animation, and a host of hardware and software features. The system is scalable to two independent channels and the 3D stereoscopic capability is a standard feature with the Lyric PRO 8 advanced creation and playout package. The power of HyperX3 and Lyric PRO 8 made it possible for CBC Sports to adapt some of its 2D images for 3D objects and animations that really stood out for those across Canada watching the hockey broadcast in 3D.

Leveraging the versatility of the HyperX3 and its integrated Lyric PRO 8 software, CBC Sports used a system capable of facilitating a new 3D score bug. During the game, the new score-generation system provided the game clock, penalties, and out-of-town scores.

"Being a former CBC Sports employee who used to use Chyron graphics for hockey games, I can greatly appreciate the work put into the production of such a prestigious Canadian event," said Phil Carmichael, vice president, product marketing at Chyron. "It was a real honor for Chyron to be involved in this history-making hockey telecast."

As the pioneer of graphics as a service for all digital video media, Chyron (NASDAQ: CHYR) continues to define the world of digital and broadcast graphics with Web, mobile, HD, 3D, and newsroom integration solutions. Winner of numerous awards, including two Emmy® Awards, Chyron has proved itself as the undisputed leader in the industry with sophisticated graphics offerings that include Chyron's AXIS Graphics online content creation software, on-air graphics systems, clip servers, channel branding and graphics asset management solutions.