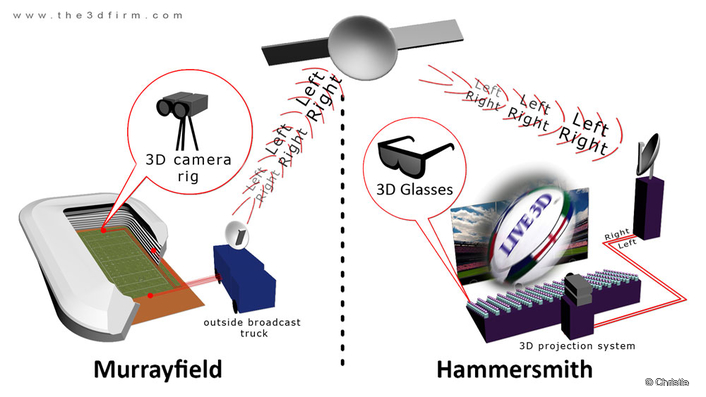 In February last year the National Basketball Association “transmitted” the first-ever live sports event in 3D HD during its All Stars weekend from the Mandalay Bay Hotel; however, the event used fibre-optic cable to relay images to an adjacent theatre. 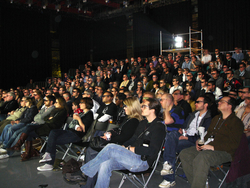 This time an invited audience of 300 mainly media industry VIPs, assembled in a purpose-built “immersive” theatre at Hammersmith’s Riverside Studios and were treated to a satellite stereoscopic feed relayed to a pair of Christie HD8K projectors, firing onto a passive projection silver Harkness Hall screen.

The test screening of the RBS Six Nations rugby match in 3D HDTV was a joint initiative between BBC Sport and The3DFirm, a consortium comprising media communications firm, Can Communicate, 3D specialist company, Inition and hire and post production house, Axis Films). The coverage was organised in conjunction with BBC Resources. 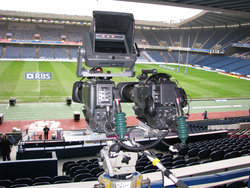 The BBC transmissions saw three pairs of Sony 950 HD cameras with carefully matched lenses mounted on a special rig providing stereoscopic images (2 x HDTV) that, from a dedicated OB truck, were beamed via a Telenor satellite to the audience in London.

The broadcast signal comprised two dedicated feeds (representing the left and right eyes) from each pair of linked cameras. The downlinked feeds from the satellite were then decoded back to two HD-SDI outputs onto the 8m x 4.5m Harkness Hall passive silver cinema screen via the two Christie HD8K projectors, (and viewed using conventional 3D glasses). 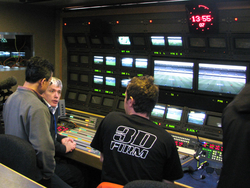 The three fixed camera positions meant that while image panning was possible there were no zooms, no action replays, no Slo-Mo touch-line action, but “the very best seat in the house,” as Aashish Chandarana, BBC Sport Innovations Executive, put it. “We wanted to do something no-one's tried before and bounce dual HD signals around and re-encode them as a 3D experience. Editorially it was not to be a fast-cut TV experience but more the experience you’d get if you were at the ground.”

The 3D feed ran standalone and did not cut into BBC Sport's live host broadcast on BBC One. The superb images were accompanied by an audio commentary from BBC Radio Scotland, and Rhys Edwards, son of legendary Welsh rugby star Gareth Edwards, directed the event in Scotland. The Murrayfield (Edinburgh) ground was chosen for the experiment as the facilities made it easier for the camera riggers to handle given there is a running track around the rugby pitch. 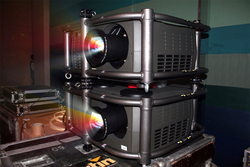 BBC Research & Development at Kingswood Warren was also involved, with the unit working on test 3D transmissions using in part funding from the EBU’s 3D Initiative.

The3DFirm had spent six months testing 3D live with BBC Resources, and having successfully delivered satellite broadcast of a stereo signal, the next step was to do it at a live event.

David Wooster of The3DFirm commented: “Premium sporting events, where demand for tickets outstrips supply, lend themselves perfectly to live 3D transmission. 3D creates an immersive, ‘almost as good as being there’ experience. Unlike traditional television coverage, 3D ‘places’ the audience in the stadium, as if they were actually there, giving a heightened sense of reality.”

Stuart Cupit, managing director of Inition, added that Christie had been “an obvious place to start” when considering technology partners. “We have worked successfully with them for many years. In this case we wanted passive projection but high power, as the audience size was an issue — and the HD8K’s produced very bright resolution. The feedback we have had to these projectors from an essentially industry audience has been amazing — it surpassed people’s expectations.”

In fact he was delighted with the overall sense of immersion — the combination 3D imagery and 5.1 surround, with the ambient sound feed mixed in with that of the radio commentary.

The Inition director added that the Riverside had also been extremely supportive. “This is the first international sporting event transmitted by satellite in stereo with multiple camera positions. In delivering an end-to-end solution we have proved the concept works and in terms of broadcasting similar events in the future this is highly significant.”

Summarised Aashish Chandarana, " This exciting event has been part of broadcasting history, and shows BBC’s commitment to explore new technologies with a view to bringing maximum enjoyment to audiences."