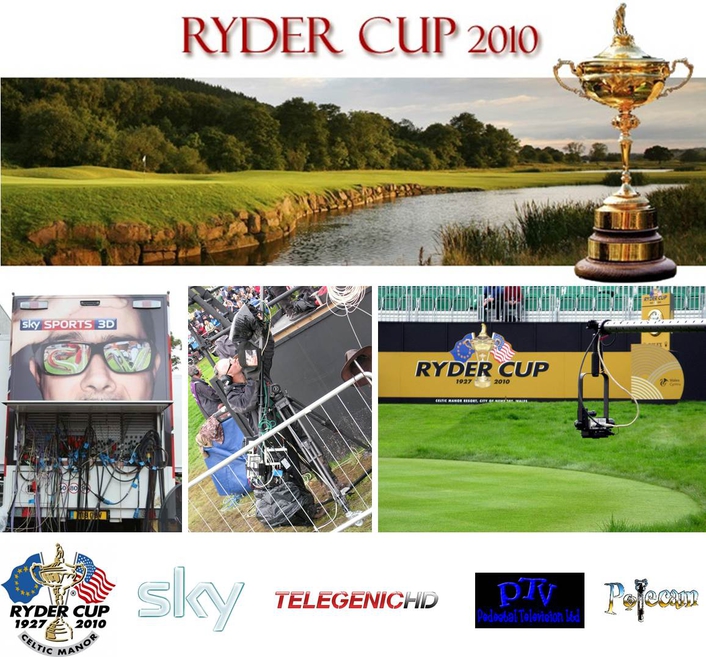 "The 2010 Ryder Cup held at Celtic Manor was covered by BSkyB in 3D using 21 stereoscopic camera rigs," comments Robin Broomfield, 3D Development Manager, BSkyB. "One of these rigs was a 3D Polecam supplied by Chris Taber of Pedestal TV. The Polecam was located on the first tee and gave spectacular 3D shots of the crowd in the stands and the players teeing off. This was the first time a 3D Polecam has been used by BSkyB on one of the 3D sport events but has given a new dimension to the otherwise low angles that look so good in 3D."

"Two Toshiba IK-HD1 cameras were attached to the new Polecam 3D mounting plate," adds Chris Taber. "This allowed easy adjustments of convergence and roll to be made at the head while final adjustments were handled in a Telegenic truck via a Sony 3D convergence unit. Left and right HD-SDI signals were converted to fibre for a run of nearly 2 kilometres back to the outside broadcast compound. Data from and to the Polecam remote control panel was also sent via fibre and allowed the engineers full control of the cameras: a vital requirement for 3D.

"The quality of the two Toshibas allowed the pictures to cut in seamlessly with the main cameras, thrilling producers and audiences alike. The simplicity of the 3D setup allows the Polecam to retain all the benefits it offers 2D users. The only crane currently available to carry a full 3D rig is costly and requires several people to operate. Polecam stays head and shoulders above the rest as a single-operator system that can offer shots other cameras can't get.

"Sky 3D went live on October 1 after six months of test transmissions," adds Polecam founder and Managing Director Steffan Hewitt. "We are delighted that Chris Taber's rig was chosen to play a part on such a historical day and for the duration of the Ryder Cup. We have been developing 3D additions to our product range since mid 2007 following initial overtures from customers. Working with Chris and other 3D specialists such as Keith Harding (TX-2) in Britain, Matthias Gollmer (Polevision) and Mathias Loew (Kamtek) in Germany, and John Gillan in the US, we have refined the system to the point where we can genuinely say Polecam is fully 3D ready."

The 38th Ryder Cup matches were held October 1-4 at the Celtic Manor resort in Newport, south Wales. With the USA as the defending cup holder, the event was played on a newly constructed Twenty 10 course. The team captains were Colin Montgomerie for Europe and Corey Pavin for the USA. Team Europe won the competition by a score of 141/2 to 131/2.

Based at Llangynidr, Powys, Pedestal Television Ltd provides a range of broadcast-quality mobile production services centred on the Polecam rig. These include HD and SD in 2D or 3D, on dry land or under water. Chris Taber of Pedestal Television is a cameraman with 20 years of experience. He has been a Polecam operator for over nine years, working on a wide range of programmes including motor racing, field sports and music festivals.

Polecam provides complete HD/SD broadcast production solutions for a wide range of applications, based on the company's world-leading truly-portable single-operator jib arm and miniature HD and SD camera systems. The Polecam system delivers the freedom to place a long-reach jib anywhere a cameraman can go, eliminating the restrictions associated with heavy multi-operator cranes. Combined with an ultra-compact camera head and choice of recorders, Polecam jibs permit new and unique angles that would be difficult any other way. Polecam rigs operate from a standard tripod and dolly or from the Polecam body harness, enabling smooth shots in the studio or on location. Rig and de-rig are fast and easy, requiring no tools. Polecam systems can operate underwater with a fully submersible pan-and-tilt head. Polecam stocks a wide range of lenses, recorders, power options, remote control and multiplex equipment. It also offers the simplest 3D system in the market.