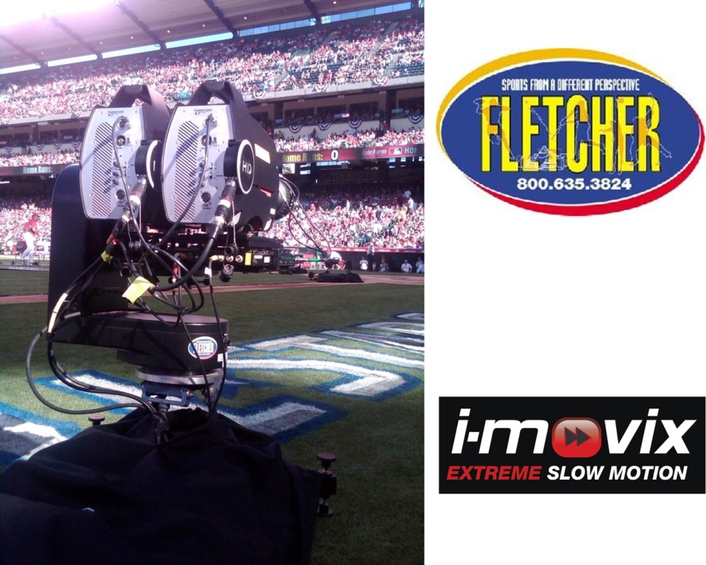 Using twin SprintCam Vvs HD systems with a PACE 3-D rig, Fletcher's crew delivered a head-to-toe shot of the batter striking the ball. At 1,000 fps and in 3-D, every detail was presented with stunning vividness — even down to compression and deformation of the bat and ball as they made contact.

"It was the shot everyone talked about — the 'wow' shot, and people could not believe that 3-D could be delivered at 1,000 fps," said Dan Grainge, vice president, Fletcher Chicago Inc. "To see the ball compress and the bat bend and feel that they are so close you could be hit by them — that created a huge buzz, and viewers were really taken aback by what they saw."

The ESPN Home Run Derby is a made-for-television event and one of the broadcaster's highest-rated live programs of the year. In addition to this event, Fletcher Sports has a full schedule of upcoming sports events to cover using the I-MOVIX SprintCam Vvs HD system, including NHL, NBA, MLB, and NFL telecasts later this year.

"We are very excited to be using the I-MOVIX solution," added Grainge. "I-MOVIX has made a complete package based on single-chip, high-speed cameras. The system makes operation of extreme slow motion familiar to anyone in the broadcast industry, and it incorporates a hand-held camera body with integrated viewfinder, tally and intercom, all running down a single SMPTE fiber to a CCU in the truck. These developments increase reliability and picture quality while greatly reducing setup and training."

Featuring the renowned quality and usability of I-MOVIX's award-winning SprintCam technology, the Phantom®-powered SprintCam Vvs HD operates at frame rates up to 2,700 fps in 1080i50 or up to 5,800 fps in 720p60 (up to 100 times slower than live action), and provides instant replay at native HD resolution and image quality.

Specially designed for live broadcast use, SprintCam Vvs HD can be specified in a standard camera version or optimized for shoulder-mounted portable shooting, providing an outstanding level of convenience and creativity in ultra-slow-motion action. Some of the new features include a dual output to allow a camera operator to shoot and record at the same time, segmented memory, a replay vary-speed function, and integration of both live- and replay-view on the viewfinder.

"SNY was the first network in the U.S. to utilize the I-MOVIX ultra-slow-motion camera system from Fletcher," said Curt Gowdy, Jr., senior vice president and executive producer for SNY. "This camera truly brings dynamic visuals that catch the viewer's eye immediately with stunning clarity and a variable selection of high-speed slow motion, and also serves as an excellent educational tool that complements our announcer's analysis from the booth."

(21/04/2011) Fletcher Camera & Lenses has continued its investment in I-MOVIX’s SprintCam Vvs HD technology by placing orders for two additional SprintCam Vvs HD 32 Gb systems that will be deployed in the U.S. for major sports telecasts“.

We, at Fletcher Camera & Lenses, are happy to continue investing in the latest I-MOVIX solution, following the interest we raised in the United States among broadcasters,” says Dan Grainge, VP Sports at Fletcher Camera & Lenses. “Within less than a year, Fletcher managed to establish the technology as a standard and to make the SprintCam used by well known US broadcasters such as ESPN, NBC, SNY, Yes Network, just to give a few examples.

“We just took delivery of 2 more SprintCam Vvs HD cameras,” continues Grainge. “The flexibility and willingness to learn about the US broadcast market allowed I-MOVIX to have its technology introduced and extensively used by senior broadcasters.”

Laurent Renard, C.E.O. of I-MOVIX adds: “The year 2010 was marked by the introduction of our technology in the US. This was done very effectively and quickly thanks to the great work done by both Fletcher and our team. Fletcher Camera & Lenses is a key partner for I-MOVIX, helping us to provide our customers and end-users with solutions that are perfectly in line with their needs. We will keep on investing in customer-oriented research & development in the future as we did with Fletcher by developing for them devices that match the requirements of U.S. broadcasters and facilities”.

The last deal between I-MOVIX and Fletcher was made at the 2011 NAB show, in the presence of the Minister President of the Walloon Region (the French speaking part of Belgium), Mr. Rudy Demotte.