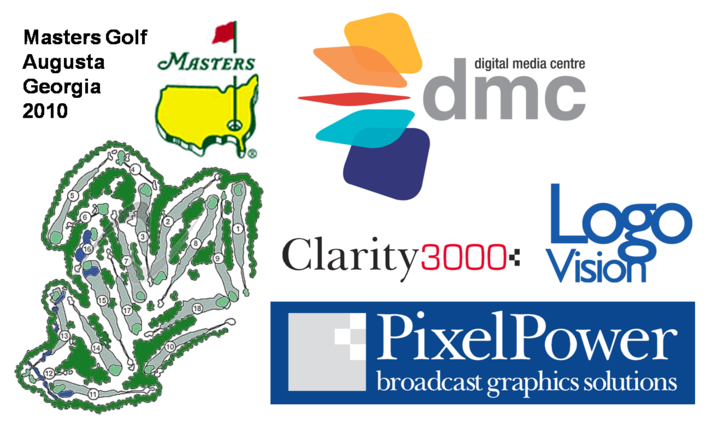 Masters Golf in 3D
Pixel Power, a leading supplier of broadcast graphics systems, has today announced its partnership with the Digital Media Centre (DMC), one of Europe’s most advanced digital media facilities, for the delivery of 3D coverage of the Masters Golf, from Augusta, Georgia, which took place this month.

The DMC – Chellomedia’s digital media facility – provided 3D coverage for select carriage on UPC in The Netherlands and via satellite to Cablecom in Switzerland. A simultaneous feed was received from the US, local branding graphics inserted and then the feed distributed to the two cable networks. Each of the four rounds benefitted from two hours of 3D coverage, filmed by a separate crew from the 2D variant.

The DMC has been a longstanding Pixel Power customer, using both Clarity™ and LogoVision™ graphics technology at its Netherlands centre, where it originates 60 channels as well as VOD content to platform and mobile operators throughout Europe.

“Once the market-leading decision was taken to provide the Masters Golf in 3D, we had to work quickly to put the playout chain in place,” explains Jean-Louis Lods, Director of Proposals and Projects, DMC. “In this instance, Pixel Power created the 3D branding graphics for us – one for live and one for recorded – supplied them to us and we then played them out from a LogoVision™ unit. Time was absolutely of the essence with this project as well as providing an optimum viewing experience.”

To widespread visitor acclaim, Pixel Power demonstrated a solution for adding stereoscopic 3D branding graphics to broadcast channels at NAB 2010. The demonstration used Pixel Power’s standard Clarity™ 3000 graphics hardware with a preview of an enhanced version of the Clarity 3D software option to add 3D channel branding graphics to incoming video. The software upgrade for Stereoscopic 3D – which was hailed by all those who saw it for its impressive results - will be available for all 3D-capable Clarity, LogoVision and BrandMaster™ systems from Pixel Power. It will integrate with the existing 3D object creation and timeline editing tools provided as part of Clarity 3D.

James Gilbert, Joint Managing Director of Pixel Power, says, “We are delighted to be able to assist an existing customer so promptly in using our technology to generate a genuinely revolutionary viewing experience. Stereoscopic 3D is very much an evolving landscape and we are excited to be at the cutting edge of that evolution.”

Pixel Power is a leader in the development and production of SD and HD broadcast graphics systems, news production workflow tools and live interactive content with more than 2,000 system installations worldwide. With a local presence around the world, the company’s award-winning solutions provide broadcasters, post-production houses and outside broadcast trucks of all sizes with distinctive, professional, reliable and cost-effective on-air graphics.