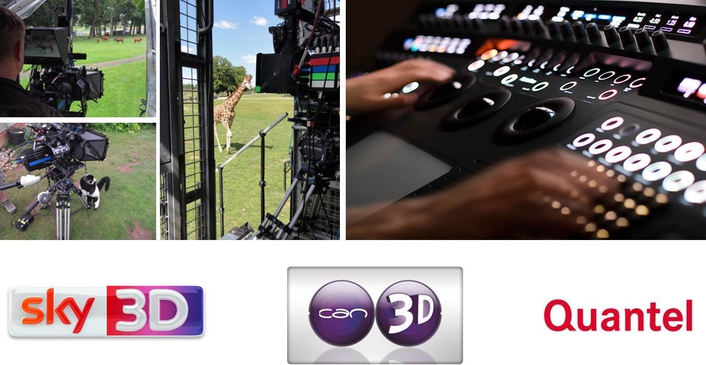 Can Communicate has pushed the boundaries of 3D television content. The company operates on two Quantel Pablos, sharing workflow via a GenePool, assisted by its recent investment in a Neo grading panel. ‘Safari Park Adventure’, filmed at Woburn Safari Park, follows the day-to-day activities of the park’s keepers and animals. The series was shot on Sony P1s with Canon HJ22 lenses, producing over 300 hours of footage for the ten part documentary.

Production Director at Can Communicate, David Wooster said, “‘Safari Park Adventure’ was a huge challenge, particularly as we had to deliver the first six, one hour episodes weekly, so we were working two systems 24/7. Our Pablos and Neo panel held up really well throughout the process. The key thing for us is that we couldn’t afford a technical failure in the first phase, reliability was crucial in this project – there just wasn’t time for problems! We had upgraded all of our systems to the latest software prior to doing all the fixing which really helped. We could not have graded the series without the Neo panel and the overall quality of what we were able to produce in such a short time is something that we are very proud of. Our Quantel systems bring reliability and a good set of 3D tools that ensure we can deliver great results. We have pushed this system on a number of jobs now and it has always delivered.”

David Wooster continues, “‘Safari Park Adventure’ was a first for us in terms of length and timescale, pushing the team and systems to new levels. If we are thrown a challenge we always look to find ways to achieve it.  I remember Alan Hayling, the Executive Producer for Renegade on ‘Safari Park Adventure’ saying we have a ‘can do’ attitude and that is probably our ethos. In every 3D project we have worked on so far we have been required to find new solutions. We have a fantastic team who have a wide range of 3D experience in feature films, live OB’s, commercials, promos and documentaries. The most important thing is to aim for the highest standard possible with each project. 3D is not particularly forgiving so delivering high quality content is important to us. We also have our own 3D filming kit and our own post facilities.  This means we can manage entire projects and guarantee a level of quality which importantly is cost-effective. We are also fun to work with, a combination that builds good long standing relationships.

“Our Pablos were workhorses, working 24/7 over four months. I couldn’t have asked the systems to do any more on ‘Safari Park Adventure’. Pablo has many features that make it ideal for us.  Firstly, having a dual-stream timeline allows us to treat left and right eye clips independently and so flexibly. Given the sheer amount of rushes we were looking at handling for ‘Safari Park Adventure’, we needed to be able to handle a manageable amount of data. So we used 100Mb per second for both offline and online, and due to costs we only had a limited recording capacity. Only the left eye was provided to the offline, so we needed to be able to conform the eyes independently using the EDL. We certainly wouldn’t have been able to use Cineform clips, even at a lower resolution. As we only had a week to online each episode, importing clips one by one and creating stereo pairs, as in other systems, would have taken far too long. Pablo is a massively intuitive system to learn, compared to its competitors, which is very handy for training assistants for large projects such as ‘Safari Park Adventure’. Secondly, we love the Stereo Tab. It’s so handy that we can auto balance and fix all stereo clips in one tab. The fact that as a stereo fixer you can see what you are doing in 3D as you are doing it is brilliant. Thirdly the text tab allows us to overlay text on a 3D clip which is a great time saver.

“Having the Quantel systems allows us to do what we need to do. If someone wants a ten hour 3D series within a short period of time, we have very capable staff and very capable systems. The Quantel systems mean we can deliver it. We are also using the Quantel Neo grading panel at our facility. The Neo has a very slick interface, it’s very easy to work with, and is again intuitive. It may seem superficial, but the effect it has on the client’s eyes also helps. While you could probably customise it to your heart’s content, it has everything you need right away.

“Also, Quantel’s support is essential. You don’t have a million internet forums to search if you’re having trouble with something. In the time it takes to get an answer to another system’s problem online, you could have phoned up, had someone remotely log into your system, explain the issue, and solve it. If it’s a bug, chances are it will be addressed in the next issue. The nature of current 3D work means that new codecs, new cameras, new software are being released so fast; having essentially an open line to the R&D team is a great help. We were working round the clock for ‘Safari Adventure’ and while it’s always nice to be able to say ‘I’ve been using this program for 25 years, I know it inside out’, these days it’s just unrealistic. The ability to adapt and overcome problems is a much greater skill – if you’ve got an assistant here at midnight, faced with a hardware glitch, who has exhausted their ideas, having a 24 hour phone support service can mean the difference between two and ten hours work. Our editors have no excuse for not working now!

“It is difficult to predict what’s next for 3D - it seems that every prediction about 3D has happened sooner than anticipated. The game changer for me is when 3D can be viewed in the same way as 2D. As 3D tablets, phones and computers become readily available then hunger for content is going to grow quickly. The other big advance is going to be glassless TVs; this will dramatically change the viewing experience and make 3D television attractive to a wider audience. The tablets and phones are on their way and I don’t think the TVs are that far behind. In terms of predicting new 3D genres, it’s very hard. The landmark type, high budget shows are working well on TV. However, I would like to see more series and longer running formats in entertainment and factual that can be produced at a lower price point. I would also like to see a feature film produced that is really immersive but not action and CG led and is definitely not a horror flick!

“We are currently in post on two 3D productions, one a co-production with Touch Productions about the Human Body and another for National Geographic. We have the live coverage of Wimbledon coming up later in the year and there are several live and documentary projects that are very close to being green lit. We are particularly interested in factual entertainment which can be quite a challenge in 3D, particularly delivering to realistic budgets. Our experience on recent projects such as ‘Safari Park Adventure’ has really helped us refine the entire 3D shooting and post process.

“I see the Quantel relationship more as a partnership than client and supplier. We have great lines of communication and at all times feel like we are collaborating. When we started working out the workflow for ‘Safari Park Adventure’ we had many conversations with Quantel about how to get the best results. This makes a huge difference and gives us further confidence when taking on new projects.”

CAN Serves up Wimbledon in 3D to much Applause
3D Production – Wimbledon 2011
Agile Developments Boost ...blo and Power up Pablo PA