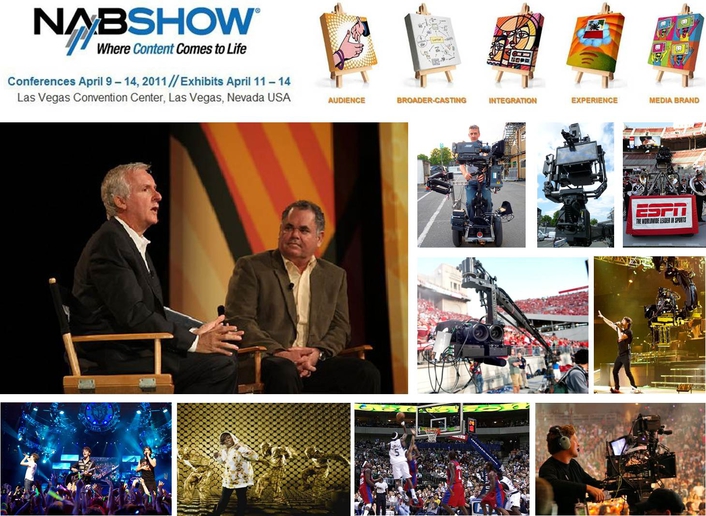 The director known for championing 3D technology told an overflow crowd at the NAB Show in Las Vegas that 3D won't work on TV if production companies can't utilize the talent they already have.

“There are a lot of myths about barriers of entry into the world of 3D,” Cameron said. “Myths like how much it costs, the need for a whole separate crew, the whole methodology is different, all the technology is different, you’re going to have to start over from scratch in territory you don’t understand. We believe exactly the opposite.”

Let People Do what They Do

“People can't completely reinvent how they do things," Cameron said. “It costs too much to hire separate crews to produce the same content in 3D and 2D, and separate 3D productions lose the expertise that comes from directors and producers who have filmed for years in 2D,” and he continued, "to grow this market rapidly and correctly with high quality 3D, let people do what they do."

Cameron said that when he began adopting 3D technologies into his own filmmaking, he didn't want to use heavy rigs that would take away his opportunities to shoot hand-held or use other techniques. "I approached that as a director saying, 'Well, I don't want to change the way I make movies,'" he said. "I think the language of cinema is what it is, different people have different styles and so on, but I don't want to be denied my normal tool set."

Cameron and his business partner, Vince Pace, spoke to open the show for media and entertainment professionals. Cameron and Pace announced the formation of their own company on Monday, the Cameron-Pace Group. They described the business as an end-to-end company helping broadcasters work in 3D.

Cameron pointed out that early attempts at 3D in sports didn't work as well as they could have because the 3D and 2D productions were separated, with the 2D producers getting better personnel and camera positions. "They were sort of treated as a red-headed stepchild, and then everybody cried that it was costing them too much because there were two entire crews, instead, there's going to be one combined 3D/2D production,” Cameron said.

Six of the 18 3D rigs used by CBS Sports at the Masters golf tournament last week were Shadow rigs. According to Pace, who was on hand as he is for many major 3D sports productions, the 3D coverage was extremely well-received.

“People were amazed by how the Shadow rigs were able to cover the ball in flight, but that’s because it was the same 2D operator who has been doing it for the last 30 years,” said Pace. “In the past, we had been given operators who had only done some golf and were suddenly tasked with capturing the perfect golf shot. We need to be on the A-list — whether it’s a director, camera position, or production gear. The way we’re going to get there is by integrating the 2D process into the 3D process.”

Paces explained that viewers have gotten beyond the prettiness of 3D and need the technology to take a back seat to the creative elements, brought by traditional directors and producers, that make entertainment work. "What they're bringing to the table is the whole foundation of the whole presentation, the whole basis of the entertainment," he said, “I believe that passive 3D sets will become widely adopted. The next threshold beyond that, which is two to three years or as much as four to five years out, is high-quality, full HD-resolution large screens that have multiple viewing angles that don’t have glasses at all. That is the point where the curve will go ballistic. Broadcasters, however, should make sure they're ready for 3D. It's inevitable that the technology will be universally adopted.”

Cameron thinks a big rush in 3D will come if technology to watch 3D without glasses becomes easier to put in TV sets. "At that point, I think the people who are first and foremost as leaders of 3D content creation are going to be the winners in the overall marketplace, the overall broadcast market," Cameron explained. "That's my own personal prediction. A lot of people would say that I've just kind of drunk my own Kool-Aid, but everything we've predicted about 3D has come true and, for the most part, ahead of schedule."

James Cameron is paving the path for 3D television to dominate the small screen within five years. The director, who set a worldwide box office record at $2.7 billion through his 3D film "Avatar", has predicted that the technology would be used in a lot of television programing, be it "sports, episodic drama, scripted and unscripted". 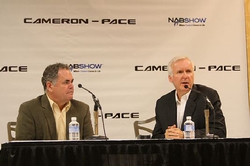 During the NAB, Cameron and his "Avatar" cameraman Vince Pace also announced a new venture which goal is to spread the use of 3D as a creative and powerful storytelling and live broadcast medium. "We haven't seen anything yet that doesn't have a great degree of value added by being in 3D," Cameron stated. Indeed electronic juggernauts Sony and Mitsubishi have been racing to promote the sale of 3D TV which has risen about 8 percent since September last year. Although there are obstacles such as cost and the need to wear 3D glasses, Cameron believes 3D TV would mirror the way 3D movies grew. Theater operators and filmmakers doubted 3D six years ago, but more films are coming in the technology nowadays.

"We overcame that hurdle because we were getting constant positive feedback from the audience, and we are seeing the same thing in the broadcast model. Everything has been moving at two or three times the pace than we would have predicted a few years ago," Cameron said. In a bid to lower the cost, the Cameron-Pace Group plans to develop a new generation of camera systems, services and creative tools. Instead of making separate and expensive 2D and 3D versions of the same film or show, filmmakers will be taught how to shoot the programs in 3D and extract a 2D feed.

A Study carried out by Futuresource Consulting, a British market research firm, mentions 4 million units of 3D TV being sold in 2010. As per their projection 5 million units are to be sold this year in the US alone and a total of 8 million units worldwide.