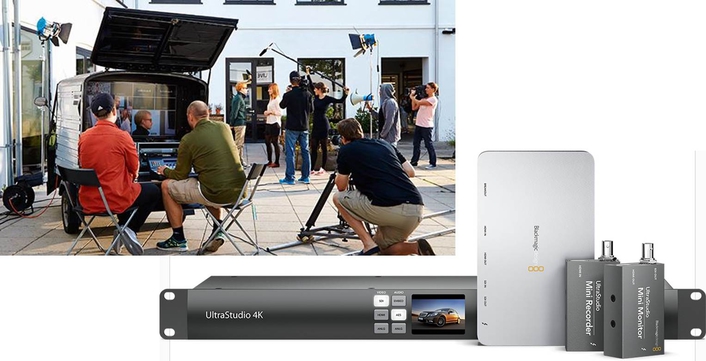 The award winning UltraStudio 4K, is an attractively designed rack mount capture and playback device based on Thunderbolt 2 technology developed by Intel® with collaboration from Apple®. Featuring a machined aluminum front panel with an integrated color LCD as well as fast to use video and audio input buttons. UltraStudio 4K is attractive so it’s perfect for desktop as well as rack mount use. The rear panel includes virtually every type of video and audio connection that exists including 6G-SDI, HDMI 4K, analog component/s-video/composite, as well as balanced analog and AES/EBU digital audio. That means customers can connect to all decks, cameras, monitors and more.

Now with the incredible 20 Gb/s speed of Thunderbolt 2, UltraStudio 4K has even more bandwidth to work with higher quality video and frame rates. Now customers will be able to capture and playback Ultra HD 4K YUV video at 60 frames per second and Ultra HD 4K RGB video at 30 frames per second via the advanced 6G-SDI video connections. The Thunderbolt loop thru allows connection of up to 6 devices, so customers can connect fast disk arrays for massive amounts of video storage with a single Thunderbolt connection to their computer.

UltraStudio 4K handles virtually every television format, featuring 6G-SDI connections that instantly switch between SD, HD, Ultra HD and 4K making it the ideal solution for all post production and broadcast users when working on design, editing, paint, color correction and visual effects tasks. UltraStudio 4K is also perfect for 3D workflow as it features both interleaved/side by side and dual stream capture and playback. Interleaved 3D allows the left and right eye to be interleaved as fields into a single video connection and file, so customers can edit using current editing software.

UltraStudio 4K customers will be able to take advantage of the forthcoming Desktop Video 10 release. The new Desktop Video 10 driver architecture is a major new software update designed from the ground up to be optimized for high speed computers and the new emerging Ultra HD television formats that require massive data speeds. DaVinci Resolve 10 customers will benefit from the simultaneous capture and playback support that lets them capture direct from cameras on set and grade the live video with multiple nodes of color correction for live onset monitoring. This makes lighting a film set easy and allows DOP’s, directors and colorists to work together to optimize the film’s look on set.

"The speed of the new Thunderbolt 2 is mind blowing!" said Grant Petty, CEO, Blackmagic Design." We are incredibly excited to deliver the worlds first video capture and playback solution that features this amazing technology and includes almost every video and audio connection available! Now with faster more powerful Thunderbolt 2 computers on the way, video professionals will be able to work with multiple streams of 4K and get more layers of realtime effects and color correction than ever before."

UltraStudio 4K Key Features
• Dual Link 6G-SDI compatible with SD, HD-SDI and 3G-SDI,  to support SD, HD, Ultra HD up to 60p and 4K.
• Compatible with Mac OS X computers with Thunderbolt™ 2 and Thunderbolt.
• SDI inputs include full SDI re-clocking for capture from poor quality SDI sources.
• HDMI in and out, supports SD and HD formats up to 1080p60, frame packing 3D and 4K.
• Component analog in and out.
• Component analog switches to s-video and composite.
• 2 channel balanced analog audio in and out. Additional RCA HiFi audio in.
• 2 channel AES/EBU unbalanced audio in and out.
• Timecode in and out on XLR connectors
• Genlock/tri-sync input. 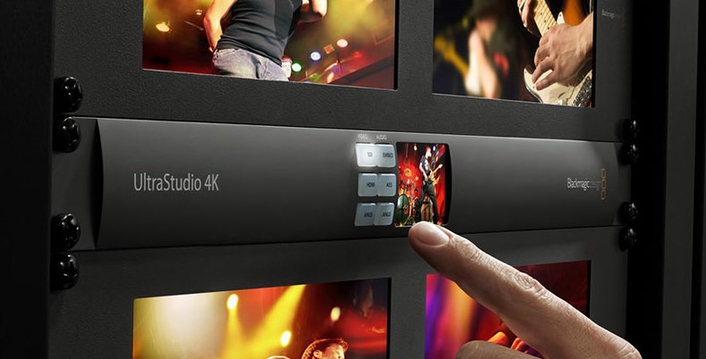