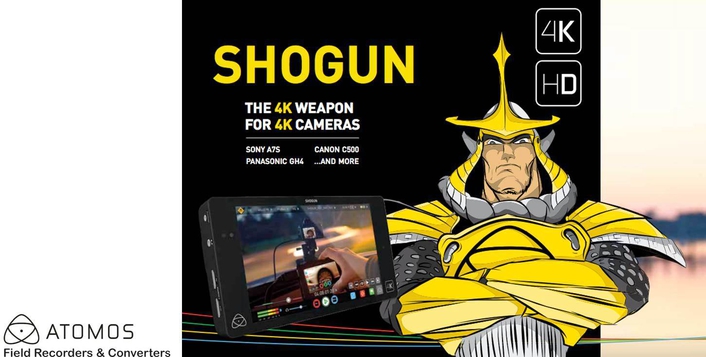 Atomos Prepared to Ship the Pioneering Shogun 4K/HD HDMI and 12G/6G/3G SDI Monitor/Recorder/Deck after IBC
Atomos, creator of award winning camera-mounted recorders and recording accessories presented the shipping version of the highly decorated 4K Shogun at IBC2014. The new Shogun is due to begin its first production run to be ready to ship to the reseller channel to meet pre-orders.

2014 has been the break out year for 4K. This was started, in the first half of 2014, with the release of the game changing Mirrorless DSLR cameras from Sony (A7s) and Panasonic (GH4). With the release of the Atomos Shogun in the 2H 2014 we now see the 4K workflow complete & transformed from a new complex and costly niche category, to a mainstream simplified and affordable solution for every creative professional from DOP's through to events and Post Production.

"The response to Shogun has been overwhelming, vindicating our strategy of backing the best sensors and cameras from the top Japanese makers and enhancing their functionality. Leading the charge is the A7S from Sony and the GH4 from Panasonic." said Jeromy Young, CEO and Founder of Atomos. "The Shogun is truly exceptional, the screen is world class and it has expansive functionality, however this means nothing unless recording media is affordable. 4K recording now costs the same as HD, fast tracking 4K adoption."

It features a stunning 1920x1200 SuperAtom IPS 7" touchscreen at 325 PPI and 178 degree viewing. 400nit brightness and multi-frequency (48/50/60Hz) operation, depending on video input, gives super-smooth monitoring and playback. The Shogun also has genlock-in for synced recording and playout. The included Lemo breakout cable for XLR Audio gives balanced audio, mic and Phantom power, taking the Shogun to the highest level of audio capability.

Like the Samurai and Ninja Blade, Shogun allows you to set up the shot with waveform and monitor assist tools, record pristine 422 10-bit images in 4K or HD straight from the camera sensor directly, all to inexpensive single SSDs, RAIDed HDD's or CFast media.

Atomos has an established reputation for ground breaking functionality of recording, monitoring and playback devices. At the heart of the system is the highly acclaimed AtomOS which seamlessly combines hardware control with software speed and flexibility. Shogun moves to AtomOS 6, Atomos's slickest OS to date. Users get new free functionality improvements and fixes as time goes on, continuing to add to the 57 releases previously done to the OS over the last 4 years. AtomOS 6 is only available for Shogun customers.

Pricing and Availability
The Atomos Shogun will ship end of October in customer's hands for their productions in November. Pricing is 1495 EUR, 1220 GBP, 1995 USD and will be available through the Atomos Worldwide reseller network.

About Atomos
Atomos designs and manufactures creative production weapons: affordable, easy-to-use field monitor/recorders, converters, power management, C-Fast cards and HDMI Cables that save video professionals time and money, reducing complexity without sacrificing quality. Atomos is based in Australia with offices in the USA, Japan, China and Germany and has a worldwide distribution partner network.