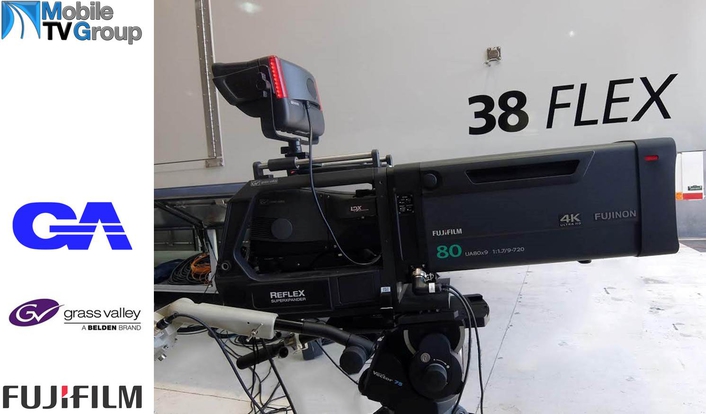 Flagship Lens from FUJINON 4K Ultra HD Series Part of First 4K Mobile Unit Demo at NABShow2015
At the 2015 NABShow2015, Mobile TV Group (MTVG), operators of one of the country’s largest fleets of mobile production units, will demonstrate the industry’s first 4K sports mobile unit with 2/3-inch cameras - the 38 FLEX - with FUJINON’s new UA80x9 4K Ultra HD lens on a Grass Valley LDX 81 4K camera. The 53’ expando will be capable of sports and entertainment productions with up to 12 4K cameras.

“We’re thrilled to showcase our 4K truck at NAB this year,” said Philip Garvin, Co-Owner and GM of MTVG. “And we’re proud to include a lens with the optical performance and quality of FUJINON’s UA80x9 on the Grass Valley LDX 81. The performance of the camera and lens on our new 4K truck will be vital in demonstrating the production possibilities of 4K for live broadcast today. They represent what this truck can do in the best possible light.”

The NAB Show runs from April 13-16 at the Las Vegas Convention Center. The MTVG 38 FLEX truck will be in the Gerling and Associates booth (#OE601) in the outside exhibit area. The Optical Devices Division of FUJIFILM will exhibit in Booth #C7025.

“The time has come for a true 4K mobile unit, and we’re thrilled we get to show this off at NAB,” Garvin added. “Walk into any electronics retailer and you’ll see 4K sets everywhere. Our new truck will help fill those screens with stunning images. With this and future 4K trucks, we’ll make it routine to produce in 4K.”

Designed for a 2/3-inch sensor, the new FUJINON UA80X9 has an 80x zoom and optical image stabilization, making it ideal for coverage of large-scale live events, such as concerts and sports. In addition to its advanced optical performance, the lens covers focal lengths ranging from 9mm in wide angle to 720mm in telephoto. Designed using the latest proprietary optical simulation software, the UA80x9 offers exceptional optical performance in the center of the image through to the corners of the frame. The digital servo’s 16-bit encoding assures operators that all lens data output—including the position of the zoom, iris, and focus—is extremely accurate. It can be linked with other systems, such as a virtual studio system for combining CG images with live action.

FUJIFILM Holdings Corporation, Tokyo, Japan brings continuous innovation and leading-edge products to a broad spectrum of industries, including: healthcare, with medical systems, pharmaceuticals and cosmetics; graphic systems; highly functional materials, such as flat panel display materials; optical devices, such as broadcast and cinema lenses; digital imaging; and document products. These are based on a vast portfolio of chemical, mechanical, optical, electronic, software and production technologies. In the year ended March 31, 2014, the company had global revenues of $23.9 billion, at an exchange rate of 102 yen to the dollar. Fujifilm is committed to environmental stewardship and good corporate citizenship