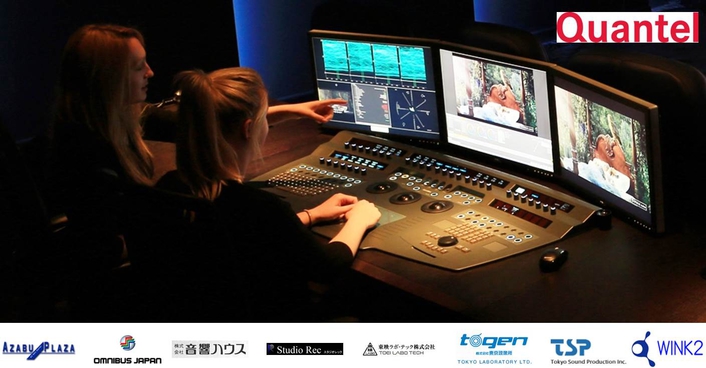 The move to 4K is being boosted by the Japanese government which is targeting widespread delivery of 4K to homes throughout Japan by 2016 in time for the Olympic Games in Brazil. Japanese post houses need to be able to offer fast and creative 4K to their customers.  As a result of the 4K boom many of Japan’s leading post houses have purchased Quantel Pablo Rio 4K color and finishing software and in some cases Genetic Engineering 2 shared workspace systems. These are:

Omnibus Japan, Tokyo
“We have adopted Pablo Rio for handling every aspect of the 4K projects we do - it is essential to have uncompressed 4K 60p playback for our jobs. Currently we are using Pablo Rio to finish the 4K movie ‘Patlabor, the next generation’, which is produced by the Omnibus Group,” said Rintaro Doke, General Manager – Technical Services, Post Production Center. http://www.omnibusjp.com/

Toei Lab Tech (Toei Digital Lab), Tokyo
“We produce many TV programs every day and Pablo Rio’s integrated editing, finishing and color correction toolset saves us a tremendous amount of time. We think Quantel has produced a unique and very advanced post production technology which we can trust and use to the full,” said Toshihiro Shiota, Manager, Post Production. http://www.toeilab.co.jp/

Tokyo Laboratory
“Tokyo Laboratory has a long and distinguished history in film scanning and DI and we were the first company in Japan to adopt Pablo Rio. We have chosen Pablo Rio 4K HFR to cope with ever-increasing demand for 4K; its file handling is fast and easy and it has all the creative tools we need,” said Katsuji Nishino, General Manager, Image Media Department. http://www.tokyolab.co.jp/

Tokyo Sound Production
“We have a strong demand for 4K finishing from one of our leading clients – a key commercial TV station in Tokyo. Pablo Rio gives us the ability we need to handle 4K 60p uncompressed RGB,” said Sei Takahashi, Sales Director. http://www.tsp.co.jp/

“Japan is moving ahead rapidly with 4K, with the world’s first regular 4K broadcasts already under way and an increasing demand for 4K post for both movies and TV production,” said Martin Mulligan, Quantel Sales Director. “However, handling 4K 60p in realtime remains a challenge for many systems; not so Pablo Rio, which is why it is the system of choice in Japan and the rest of the world for 4K HFR post.”