3D Production of the "Fallas" Festival in Valencia 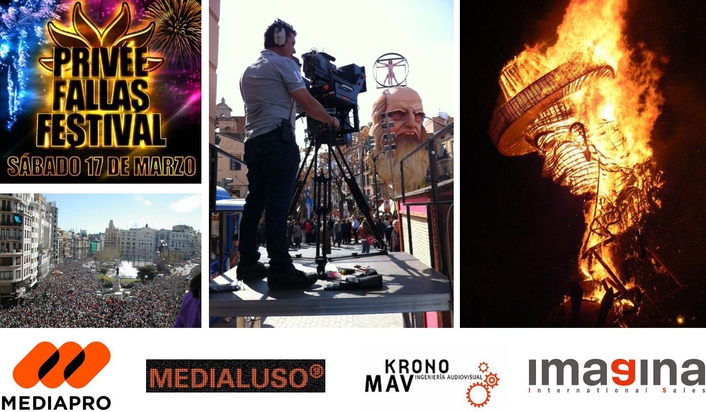 Mediapro taking part in the production of a documentary in 3D about the “fallas” festival
Mediapro / Medialuso, together with Kronomav, were taking part in the Glauka Films project to make a film documentary about the “fallas” festival. The documentary is targeting a global market as well as Spanish viewers. It sets out to explain the festival to people who’ve never seen it, who’s behind it, why they do it, what its significance is as well as showcasing the 3D technology.

Each neighbourhood of the city has an organized group of people, the Casal faller, that works all year long holding fundraising parties and dinners, usually featuring the famous specialty paella. Each casal faller produces a construction known as a falla which is eventually burnt.

Falles and ninots
Formerly, much time would be spent by the Casal faller preparing the ninots (Valencian for puppets or dolls). The ninots and their falles are constructed according to an agreed theme that has traditionally been, and continuesly is, a satirical jab at anything or anyone who draws the attention of the critical eyes of the falleros – the celebrants themselves. In modern times, the whole two week long festival has spawned a huge local industry, to the point that an entire suburban area has been designated the City of Falles – Ciutat fallera. Here, crews of artists and artisans, sculptors, painters, and many others all spend months producing elaborate constructions of paper and wax, wood and styrofoam tableaux towering up to five stories, composed of fanciful figures in outrageous poses arranged in gravity-defying architecture, each produced at the direction of the many individual neighbourhood Casals faller who vie with each other to attract the best artists, and then to create the most outrageous monument to their target. There are more than 500 different falles in Valencia, including those of other towns in the Valencian Community.

Although the Falles is a very traditional event and many participants dress in medieval clothing, the ninots for 2005 included such modern characters as Shrek and George W. Bush, and the 2012 Falles included characters like Barack Obama and Lady Gaga.

La Cremà
On the final night of Falles, around midnight on March 19, these falles are burnt as huge bonfires. This is known as the cremà (the burning), and this is of course the climax of the whole event, and the reason why the constructions are called falles ("torches"). Traditionally, the falla in the Plaça de l'Ajuntament is burned last. 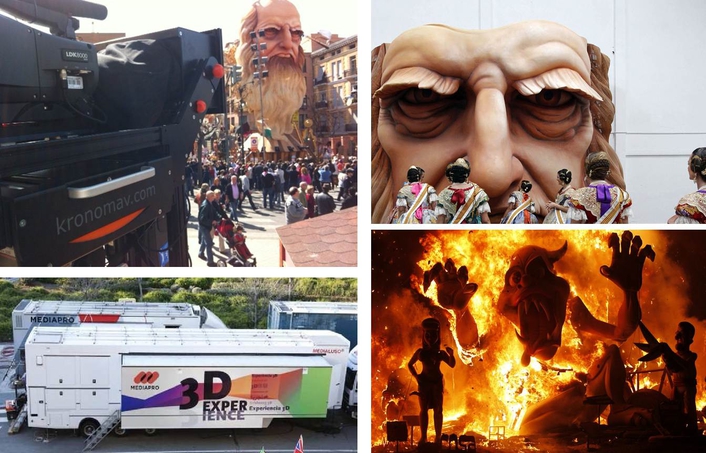 History
There are different speculations regarding the origin of the Falles festival. One suggests that the Falles started in the Middle Ages, when artisans disposed of the broken artifacts and pieces of wood they saved during the winter by burning them to celebrate the spring equinox. Valencian carpenters used planks of wood called parots to hang their candles on during the winter, as these were needed to provide light for the carpenters to work by. With the coming of the spring, they were no longer necessary, so they were burned. Over time, and with the intervention of the Church, the date of the burning of these parots was made to coincide with the celebration of the festival of Saint Joseph, the patron saint of carpenters.

Until the beginning of the twentieth century, the falles were tall boxes with three or four wax dolls dressed in fabric clothing. This changed when the creators began to use cardboard. The fabrication of the falles continues to evolve in modern times, when the largest displays are made of polystyrene and soft cork easily molded with hot saws. These techniques have allowed the creation of falles over 30 metres high.

During the early 20th century and especially during the Spanish Civil War, the monuments became more anti-clerical in nature and were often highly critical of the local or national governments, which in fact tried to ban the Falles many times, without success. Under the dictatorship of Franco the celebration lost much of its satirical nature because of government censorship, but the monuments were among the few fervent public expressions allowed then, and they could be made freely in Valencia. During this period, many religious customs such as the offering of flowers to Our Lady of the Forsaken were taken up, which today are essential parts of the festival, even though unrelated to the original purpose of the celebration, and somewhat antithetical in spirit.

With the restoration of democracy and the end of government censorship, the critical falles reappeared, and obscene satirical ones with them. Despite thirty years of freedom of expression, the world view of the fallero can still be socially conservative, is often sexist and may involve some of the amoralism of Valencian politics. This has sometimes led to criticism by certain cultural critics, environmentalists, and progressives. Yet there are celebrants of all ideologies and factions, and they have different interpretations of the spirit of the celebration. In fact, recent initiatives such as the pilota championships, literary competitions and other events show a culturally vibrant city that yet relies on its ancient traditions to express its singular identity, even those as seemingly frivolous as the Falles festival.