The 3D Live Test of Sportcast in Berlin 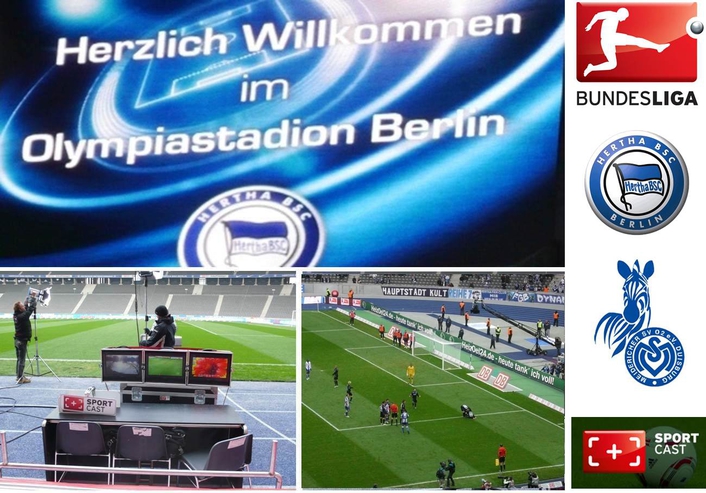 Together with its partners WIGE Media AG, Studio Berlin Adlershof and 3ALITY, Sportcast carried out another 3D test
Sportcast is one of the largest producers of live sports in HD worldwide. And as a subsidiary of DFL Deutsche Fußball Liga GmbH, Sportcast is the host broadcaster of the Bundesliga and 2. Bundesliga in Germany. In addition, Sportcast produces all DFB cup matches and provides advice on productions in various media formats to further associations and leagues as a competent contact partner. After the two DFB cup matches on 26 and 27 October Sportcast produced another 3D Bundesliga match on 27 November in Berlin. 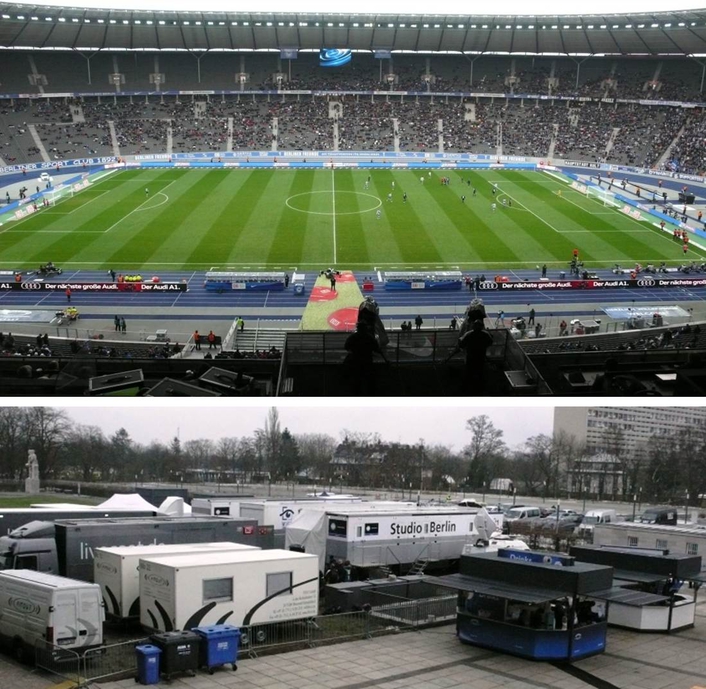 The Olympia Stadion in Berlin and the Broadcast Compound

With the start of the second half of the Bundesliga season 2010/11 Sky and Telekom will show one match per match day in 3D. In an interview with “Werben & Verkaufen” last week, DFL managing director Tom Bender stated: “We see the 3D production of the Bundesliga first as a test and try to cover the costs. To generate additional money with the match coverage in 3D the market has to grow. But even if the TV manufactures would only sell 3D devices from now on, it would take some time to become a viable business. Nevertheless for the product and the brand Bundesliga 3D plays an important role,” and he continued, “the quality of our product is not only decisive for the German market, but also abroad. We deliver technically the best quality currently available. This includes the production in HD and also selected matches in 3D.” 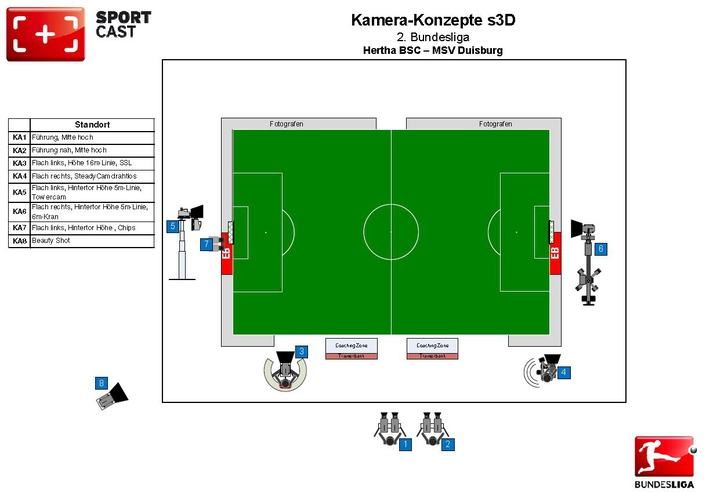 Following these guidelines Sportcast has carried out another 3D test production: The 2. Bundesliga match Herta BSC Berlin – MSV Duisburg (0:2) on 27 November, was produced with WIGE Media AG. Together with its US partner 3ALITY Digital and its German partner Studio Berlin Adlershof (SBA) the 3D setup and the production at the Olympia Stadion in Berlin was executed with eight stereo camera pairs at temperatures around freezing point. Camera pairs #1 and #2 were Grass Valley LDK-8000’s mounted on 3ALITY TS-4 side-by-side rigs positioned on lower main camera shooting platforms (compared to 2D productions). All other camera platforms (except the Beauty Shot) were positione at ground level. 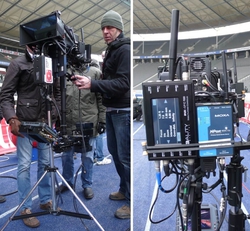 Camera pair #3 was a premiere in Germany: Two Grass Valley LDK-8300 cameras were mounted on a 3ALITY TS-2 mirror rig and the 3D signals were recorded on EVS XT2+ servers for smooth replays of highlights in 3D super slow motion. Another premiere was camera pair #4: Two Sony HDC-P1 cameras were mounted on a 3ALITY wireless controlled TS-5 mirror rig. Also the video signals were transmitted wireless via two Link L1500 transmitters (MPEG2, 19Mbit/channel). In addition the camera shading and matching via the Sony RCP-1500 (X/Y and rotation, intraocular and conversion) in the OB truck was carried out with a proprietary wireless link. The whole system was mounted on a Sachtler Artemis EFP/SE via a GPI-Pro spring arm. Camera pair #5 (2x LDK-8000 on TS-2 mirror rig) was mounted on an MAT Tower, while camera pair #6 (2x LDK-8000 on TS-2 mirror rig) was fixed on an MAT Crane. Camera pairs #7 (InGoal) and #8 (Beauty) were Cunima MCU mounted on Stereotec rigs. 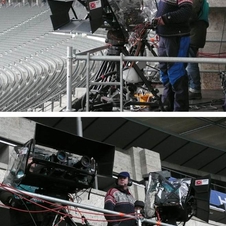 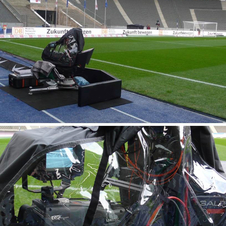 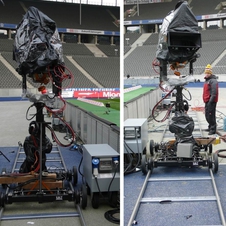 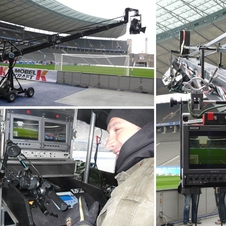 All LDK-8000/LDK-8300 cameras were equipped with 22x Fujinon zoom lenses and could be used across the whole zoom range without any limitations. Camera #2 operated with a 2x zoom extender delivering a zoom range of ~340mm. All the cameramen appreciated the unrestrained zoom range not limiting their creative image capturing. 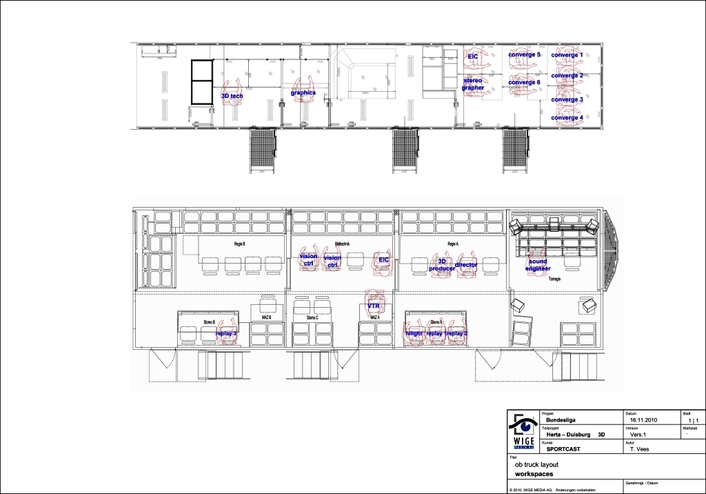 At the broadcast compound in front of the stadium the SBA HD1 truck with 3D layer was parked next to the WIGE 3D production unit (which is a new member of the WIGE OB fleet). The WIGE 3D production unit houses the convergence area with six workspaces for  convergence operators, one desk for the stereographer and the workspace for the 3D technicians to control the 3D rigs. The work of the convergence operators was supported by 3ALITY’s SIP 2900 stereoscopic image processor. The SIP 2900 can control up to eight cameras simultaneously. Using integrated web-based software, engineers can monitor, assess, adjust and control the cameras from one, powerful, rack mounted control center. During the rip preparations prior to the match the convergence operators used the SIP 2900 to align the lenses ensuring near pixel-perfect tracking during even the most complex zooms. During the match the stereographer referred to the SIP 2900’s multitude of viewing modes and analysis tools to monitor, assess and optimize 3D – on the fly. In the graphics area WIGE was using a Brainstorm system for the production in Berlin. Brainstorm enables the creation, preview and playout of real-time graphics and statistics during live 3D sports events. A single operator can control the system. The system offers refraction and distortion effects which are shown in real time. Calibration of the 3D graphics is done by just viewing a straight line in the set and adjusting the distortion to match a similar line in the scene. 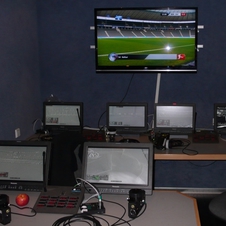 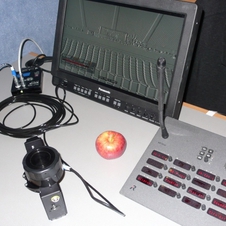 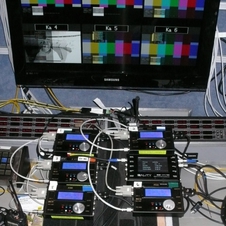 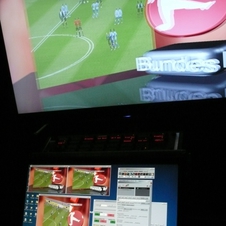 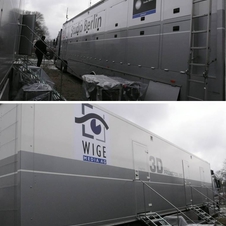 As usual the camera shading was done in the vision control area in the SBA HD1 truck. The Grass Valley RCPs were software updated to enable the control of one camera pair with one RCP. All the 3D camera signals were visible on the monitor wall in the production area. The live editing of the 3D program was carried out on a Grass Valley Kayenne including the replay of the super slomo signals from the EVS XT2+. The 5.1 surround sound was mixed on a Lawo mc²66 console. In total 21 staff including the director and the 3D producer were working in the two trucks delivering an excellent 3D signal of the match.

To train the 3D skills of more than one director the first half of the game was directed by Knut Fleischmann while the second half was directed by Jürgen Schmitz. The technical leadership for the 3D production was with Tobias Vees, the 3D Producer was Jens Wolf (both WIGE) and the 3D Stereographer was Nicholas Brown (3ALITY).

3D Infrastucture in the SBA HD1 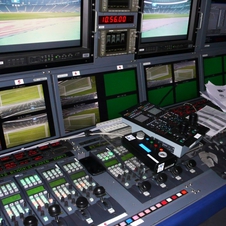 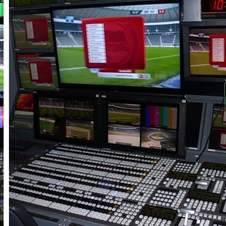 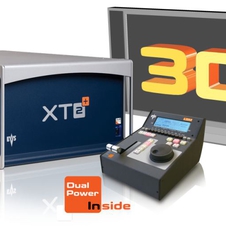 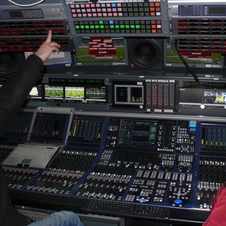 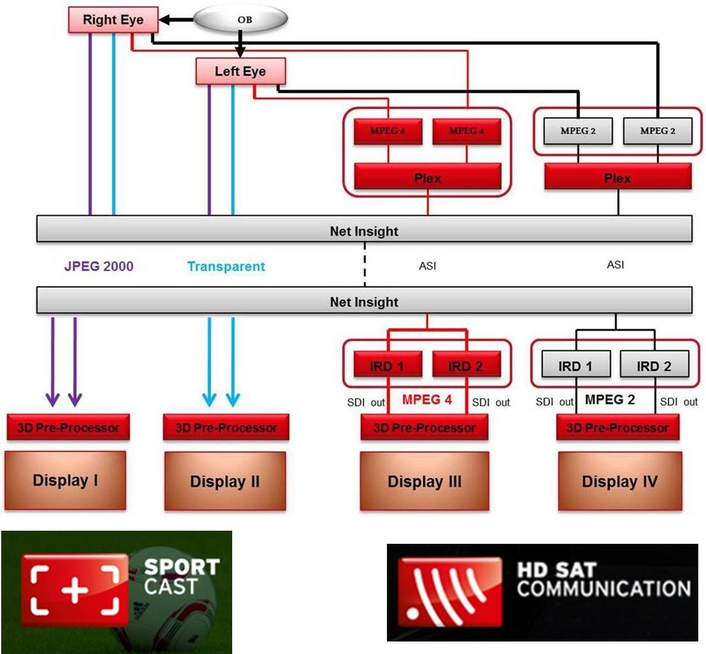 Setup of the 3D Distribution Test

In parallel the transparent 3D signal was recorded on a DVS server for further evaluations by the EBU. Attached to the DVS server was the stereoscopic analyzer STAN, developed by Fraunhofer HHI in partnership with KUK Filmproduction. STAN combines real-time image analysis with intelligent visualization tools and intuitive graphical user interfaces to assist cameramen and production staff in shooting the right stereo content for 3D post-production and 3D live events. Corresponding feature points in the scene are matched automatically to determine the given disparity range, and to compute stereo calibration data. Using actuators, the stereo baseline and other mechanical parameters of the stereo rig can be adjusted automatically so that the specified disparity range is not exceeded and the stereo images are almost rectified. Furthermore, residual distortions in color and stereo geometry can be corrected using real-time color matching and rectification. STAN uses a touch screen for intuitive user interaction. Various viewing tools like crop/opacity overlay, side-by-side, checkerboard or anaglyphic stereo can be selected to analyze the stereo quality while other tools like RGB parade, signal waveforms or color histograms assist control of color quality. Real-time estimation of dense pixelby-pixel disparity maps can be used to visualize the depth structure of the scene. Basic stereo parameters like convergence planes can be adjusted manually and the results watched simultaneously on the screen. Related shift-cropscale processing is done on-the-fly. In addition, STAN can generate and store metadata for late post-production processes. For control purposes the STAN offers a touch-screen for intuitive user interaction including several visualization modes for the evaluation of the stereo quality. 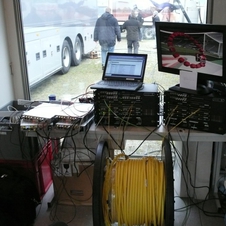 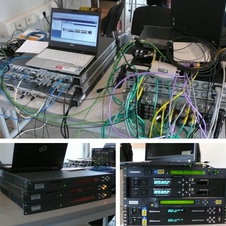 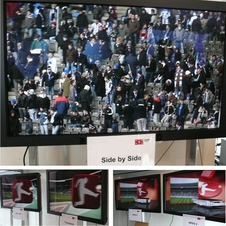 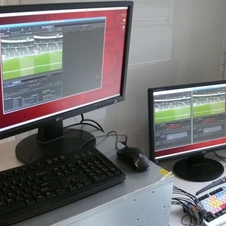 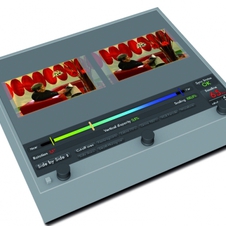