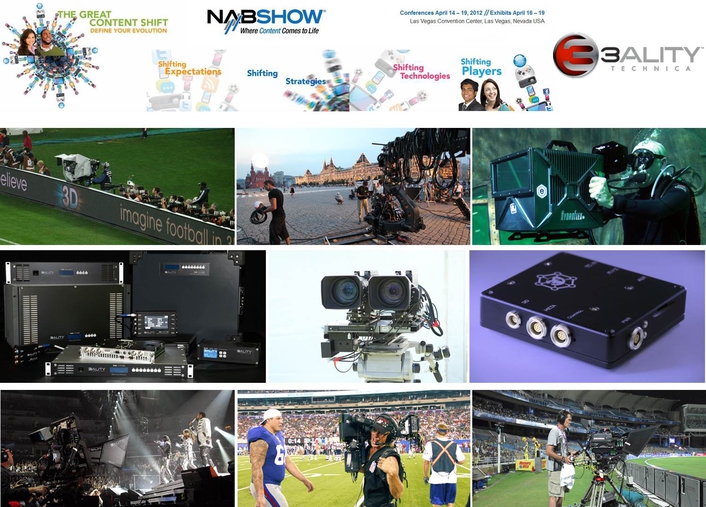 Introducing 3ality Technica’s new Helix™
The showcase includes the new Helix™, which is the result of the combined efforts between the former designers and engineers from 3ality Digital and Element Technica. 3ality Technica’s engineering team has combined magnesium, carbon fiber and aluminum into functional, cutting-edge art with the Helix. “The Helix has all the precision, automation and refinement of the TS5 with the configurability and user-friendliness of the Atom,” said Stephen Pizzo, SVP 3ality Technica. “It offers complete functionality when coupled with the Stereo Image Processor™( SIP).” The Helix was designed from the ground up to take advantage of the new IntelleSuite™ enhanced control and automation software, making the Helix the most intelligent system of professional 3D camera platforms.

Also being presented under 3ality Technica’s banner accessories brand, Elements™, for the first time as a complete kit will be the Sony PMW-F3, designed in partnership with Sony for their F3 2D camera. “As a DP myself, I appreciate what working DPs need in a camera rig. This is everything you need in a single unit. It’s our go-to solution,” said Mitch Gross, AbelCine Applications Specialist who worked on developing the Sony PMW-F3 solution with Stephen Pizzo and the Elements™ team. The former Element Technica accessories have been rebranded under the Elements brand name from 3ality Technica.

3ality Technica will also showcase the SIP 2100 and its benefits for post-production work, which will be demonstrated by editor George Bellias, who has worked on such high profile projects as The Black Eyed Peas (The Beginning) – Paris (2011), Britney Spears Live: The Femme Fatale Tour for EPIX (2011), We Are the World 25 for Haiti (2010), and most recently, Alter Bridge’s “Live At Wembley” (2011). “The SIP 2100™ provides real-time 2D and 3D analysis that allows us to match color and alignment far more accurately than our eyes can perceive. It isn’t just another tool in my post-production tool-belt—it is the foundation,” said Bellias. Bellias will give attendees a sneak peek at what he does when editing with the SIP 2100 at 3ality Technica’s booth.

“2012 is coming together as a banner year for 3ality Technica, as we continue the art of perfection and efficiency in our 3D production systems. We are delivering some of the smartest systems the industry has known, which are being utilized by Hollywood’s greatest filmmakers and the world’s leading broadcasters. Our systems are setting new standards in the broadcast industry, saving on production time and cost. These are systems that will remain in a technological leadership position for many years to come. They are ahead of their time and ahead of the competition. In fact, these are systems our competition would like to be building but are only talking about,” said Steve Schklair, CEO of 3ality Technica.

About 3ality Technica
Known as the company who brought the world “U2 3D” in 2007, 3ality Technica is considered the birthplace of the current 3D revolution.  Headquartered in Burbank, California, 3ality Technica is the leading innovator, manufacturer, and provider of stereoscopic 3D (S3D) production systems and technology.   The company’s product line is comprised of both hardware and software combined to produce the most accurate and advanced image processing systems in the world.   These advanced systems are widely used by leading Hollywood filmmakers, the music industry, and by major broadcasters.

2012 will see more 3ality Technica theatrical releases than any other year including the recently released “Underworld 4 Awakenings” and “The Darkest Hour.”  Upcoming Hollywood titles that have utilized 3ality Technica’s advanced S3D image systems include “The Hobbit: An Unexpected Journey,” “The Great Gatsby,” “Prometheus,” “The Amazing Spider-Man,” “Jack the Giant Killer,” and “Oz: The Great and Powerful.”   Recognized as the industry leader in providing 3D production development and support on a wide array of projects, 3ality Technica is also noted for its amazingly true-to-life 3D image capture for artists such as the Black-eyed Peas, Britney Spears, and Kenny Chesney.